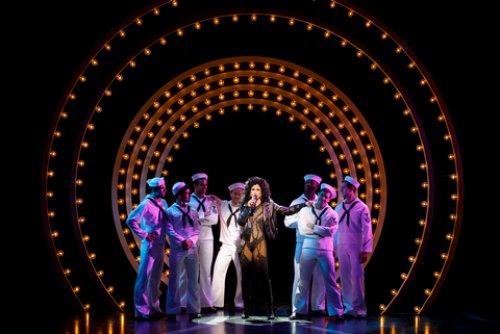 King Kong, the Musical features a twenty-foot tall marionette. The Prom has four vast egos which no stage can contain. Hamilton has the longest wait for good seats. But The Cher Show beats them all because it has Bob Mackie whose costumes brighten this musical, make it stand out from other jukebox musicals, although hyperkinetic staging and first rate performances shouldn’t be discounted.

Rick Elice’s libretto for The Cher Show may fictionalize Cher’s struggles, but isn’t a totally whitewashed version of Cher’s glamorous rise to fame.   It’s an homage spanning her days with her musical mentor and husband Sonny Bono through her transformation into an Academy Award winning legend for Moonstruck.

Elice is no stranger to biographical musicals.  His Jersey Boys is still running off-Broadway.  Here he was inspired to divide the eponymous character into three personalities:  the Star (the sensational, charismatic Stephanie J. Block), the current, living legend; the Lady (Teal Wicks, fascinating in this bridge role), the mid-career Cher; and the Babe (Micaela Diamond in a gutsy, eager performance) the young Cher just discovering herself guided by her Svengali, Sonny Bono (Jarrod Spector, not a physical match to Bono, but a fine singer and actor). 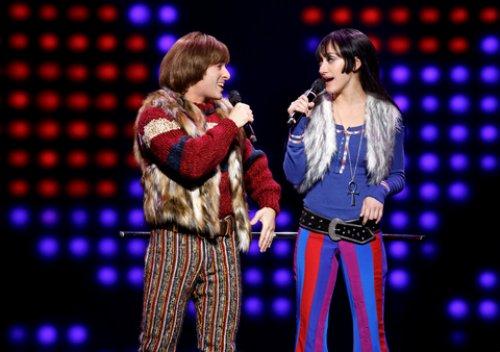 The score of The Cher Show is ready made:  virtually all her hits orchestrated anew by Daryl Waters whose glittery arrangements convey their joy, sexuality, innuendo and period sound.  Christopher Gattelli’s impressively savvy choreography which evokes the periods of her life and enhances her gay goddess persona is icing on the cake with its hip-swaying, foot-stomping routines.

The show opens, appropriately enough, with “If I Could Turn Back Time,” permitting the Star to shine a spotlight on her life choices via her two doppelgangers.  The Star sometimes has to guide them with the authority of hindsight, but also injects an earthy sense of humor when they get out of line.

The Babe is an insecure young singer, still in high school, encouraged by her mother, Georgia Holt (a solid, warm Emily Skinner) to join up with Sonny.  Holt, frustrated in her own desire for a performing career, pours all her energy into supporting her Cherilyn who comes to her saddened that she has been labeled a “Half Breed” by her high schoolmates. 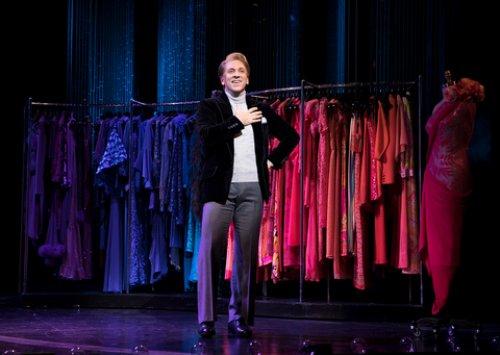 Sonny introduces Cher to Phil Spector (Michael Fatica, suitably full of himself) and Sonny and Cher are off and running, their “I Got You, Babe” earning them fame and their own TV show.  Of course, they have to work through poverty, bad reception to their act, tax debts and other problems, but with the help of Bob Mackie’s imaginative creations, they develop their own dazzling persona and run with it.  Mackie, played by the exuberant Broadway veteran Michael Berresse (who also plays film director Robert Altman) adds just the right amount of “gay” to the show.

The Sonny and Cher Show is accurately reproduced, but not so the Bono/Cher offspring Chastity who, for politically correct reasons, I suppose, is called Chaz by Cher who comes across as a decent mom.

The Lady part of her life includes her acceptance as an actress, beginning with Robert Altman’s using her in the film Come Back to the Five and Dime, Jimmy Dean. 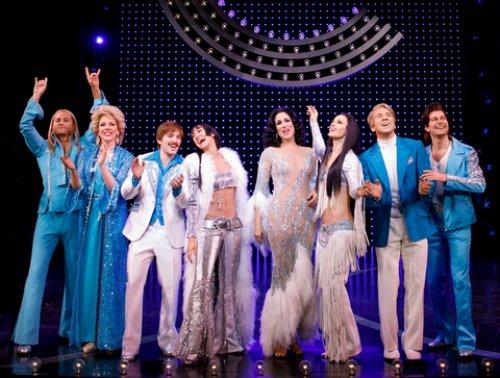 The Cast of “The Cher Show” (Photo credit: Joan Marcus)

The one word to describe The Cher Show is glitzy. The centerpieces of the sets designed by Christine Jones and Brett J. Banakis are two curved walls which serve to define the playing areas.  They light up, move back and forth and also serve as a giant screen upon which photographs and videos from Cher’s eventful life are shown.

Mackie’s costumes are over-the-top re-creations of the originals, including the iconic, skin exposing Academy Award outfit that caused so much buzz.

Jason Moore’s direction is guided by the “more is more” philosophy, giving the audience a show that explodes from the stage.