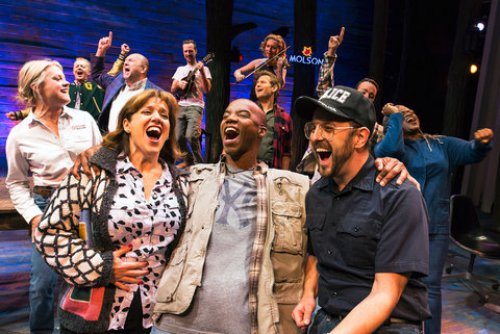 The cast of “Come From Away” (Photo credit: Matthew Murphy)

For once a “feel-good” musical that also has depth and resonance!  Come From Away at the Gerald Schoenfeld Theatre takes on one of the darkest periods in our contemporary history and spins it into a goldmine of goodwill, compassion and gentle surprises.

Come From Away, written by Canadians Irene Sankoff and David Hein, opens on 9/11 when Middle Eastern terrorists made a number of deadly attacks to destroy American targets, including the World Trade Center and the Pentagon, forcing the closing of American airspace.  Thus, all flights from the East had to be forced down in Gander, a large airport facility, largely unused since modern jet aircraft did not have to stop there for refueling.

This led to some seven thousand passengers inadvertently stranded in Gander, straining the local towns’ resources to their utmost.  The locals, long preoccupied with their schools, politics and culture, are puzzled by the odd sophisticated views of the visitors.  Ultimately the kindness and generosity of the locals towards the often confused and confrontational aliens melt the hearts of the strangers—and the audience.

The flexible set by Broadway regular Beowulf Boritt features a slatted back wall that often opens to reveal landscapes in addition to pieces of furniture brought on and off to indicate the numerous locations from the local meeting hall to the individual homes of the different hosts.  A row of seats becomes an airplane; a lectern becomes a meeting hall. 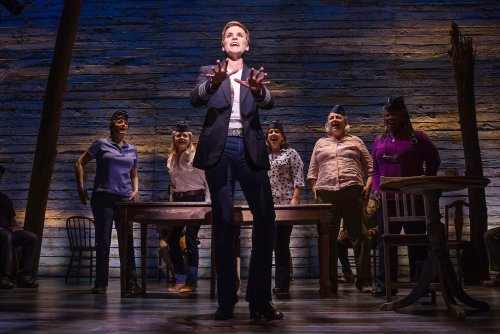 Jenn Colella and cast of “Come From Away” (Photo credit: Matthew Murphy)

Guided by Kelly Devine’s musical staging and Christopher Ashley’s direction, the show zips along tossing happiness and light out at the audience.

Serious issues aren’t totally avoided.  A Middle Easterner, Ali (Caesar Samayoa, skillfully distancing himself from Kevin J, half of a bemused gay couple he also plays) is harassed unmercifully and Hannah (Q. Smith in a heartrending turn), the mother of a New York City fireman, frantically tries to contact her son with bitter results.

“Welcome to the Rock,” an exuberant, foot-stomping number, draws us into the lives of these locals who include the Mayor, Claude (Joel Hatch, doing put upon and courageous brilliantly), the head of the striking bus drivers, Garth (Chad Kimball who adroitly turns from this working class hero to the sophisticate Kevin T, half of that gay couple) who generously delays a planned strike to ferry the newcomers to their destinations which include a school, a hospital and many private homes.  Bonnie, a local animal lover works hard to protect the many pets and zoological specimens caught in the bellies of the stranded airplanes.  Played by Petrina Bromley, she’s both pathetic and heroic in equal measure.  Oz, a local law enforcement officer, is played with just the right jargon and physicality by Geno Carr.

Janice (Kendra Kassebaum in a bright, assured performance) is a local TV reporter on whose lap this massive story falls.

Love rears its lovely head when middle-aged Diane (a warm, believable Sharon Wheatley), gradually over the five days they are stranded, falls for the Brit, Nick (Lee MacDougall in a lovely, soft-focused performance).  They accept their bittersweet fate when they are allowed to continue their journeys. 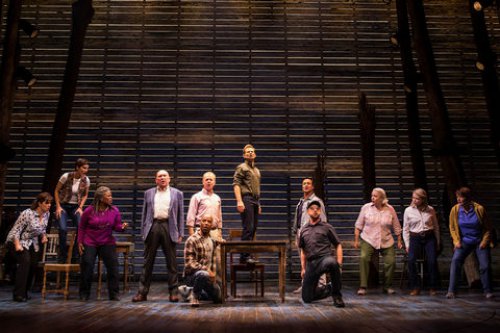 The cast of “Come From Away” (Photo credit: Matthew Murphy)

There are scenes on the aircraft in which the confused and worried travelers wonder what’s happening.  We meet a nervous Bob (Rodney Hicks, making the most of a small role), the gay couple and, most of all, a pilot, Beverley played by Jenn Colella in a superb, bright-eyed performance that culminates with the only solo song in the show, “Me and the Sky” which tells of her tough battle to become the only female head pilot in America.

The cast is rounded out by Astrid Van Wieren who plays local Beulah who leads the roundup of sheets, towels, soap, food and other necessities.  She is totally convincing in her warm portrait of generosity and kindness.

The songs push the plot along, ranging from numbers about the locals’ dealing with valuable resources (“Blankets and Bedding”) to the quiet awe the visitors express at the local scenery (“Darkness and Trees”).  “Somewhere in the Middle of Nowhere” and “Something’s Missing,” eloquently deal with the short-term emotional turbulence that eventually steadied to mutual admiration and many long-term friendships.

Aside from the songs, frequent squawking messages from the airport towers and media reports add verisimilitude to the play, all animated by Gareth Owen’s sound design which dexterously adds dimension to the drama.  Toni-Leslie James’ costumes are flexible and colorful.  With just the switch of a jacket or a cap, the actors easily morph from warm-hearted local to cool, sophisticated visitors.  Add in Howell Binkley’s subtle lighting and the production values are all first class, beautiful in themselves, but serving the storyline even better.

In these troubling times, it is hard to imagine a time and place where a disaster led to such humble and charming meetings of so many worlds.

Come From Away (open run)

Running time:  one hour and 40 minutes with no intermission