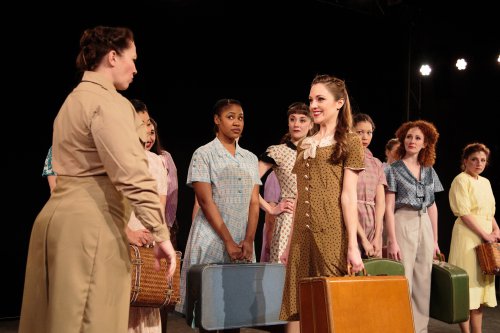 In the summer of 1944, the US Amy commissioned a series of musical comedies from the Special Services Division of the War Department that could be packaged and sent complete with choreography, costume and set information to places where USO tours could not be flown in. Called Blueprint Specials as they included all that was needed to produce the shows, these musicals were created by many theater people who became legends after the war such as composer Frank Loesser (Guys and Dolls), choreographer José Limón (The Moor’s Pavane), and sketch writer Arnold M. Auerbach (Call Me Madam).

Never before seen on mainland U.S.A, the current show is an amalgam of the four existing shows (P.F.C. Mary Brown; Hi, Yank!; About Face and OK, USA) of the six that were written. Directed and adapted by Tom Ridgely, co-artistic director of Waterwell, the entertaining show is a co-production of Waterwell in association with the Intrepid Sea, Air & Space Museum under the auspices of the Public Theater’s Under the Radar Festival. Performed on the hangar deck of the USS Intrepid just like it might have been done in 1944 or 1945, the show is a site-specific environmental production with limited scenery but using a combination of Broadway stars and featured players, Waterwell members, Active Duty U.S. military and veterans, and Reserve Special Members. The dance chorus is provided by the Limón Dance Company.

While the topical material (mainly by Auerbach) and the 20 musical numbers (eight of which are by Loesser and two by famed Hollywood composer Alex North) relate to the army and army life, particularly the then recent addition of the WAC’s, Women’s Army Corps, the first women other than nurses to serve within the ranks of the U.S. Army, is dated, the jokes still register and the unfamiliar melodic and syncopated songs are delightful. The resulting show starring Tony Award nominees Laura Osnes and Will Swenson is a fast-paced musical revue with two through lines. 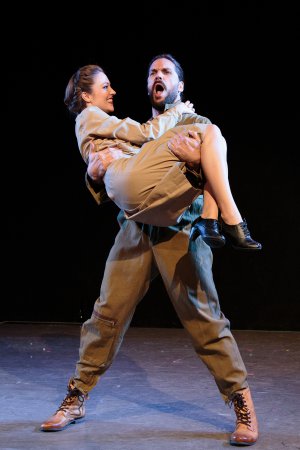 Laura Osnes as Pallas Athene and Will Swenson as Jupiter in a scene from “Blueprint Specials” (Photo credit: Ryan Jensen)

An opening prologue which includes Washington, Lincoln and Pershing, pokes fun at red tape in the army. Up on Mount Olympus, Pallas Athene (Osnes), goddess of wisdom of war, is bored and envious of the women on earth who are joining the WACs. To the chagrin of her husband, Jupiter (Swenson), god of the heavens and weather, Pallas decides to go down to earth and enlist, taking the name “Private Mary Brown.” She comes up against MP Peggy (Emily McAleesjergins, vocalist for the West Point Band) who will not put up with her sense of entitlement. Eventually “Mary Brown” adapts to army ways (such as lack of privacy) without the luxuries she is used to.

Osnes (Grease, Anything Goes, Cinderella) gives one of her strongest performances to date as the determined “Mary Brown” who stands up to macho, chauvinistic husband Jupiter. Swenson (110 in the Shade, Hair, Les Miserables) has a lot less to do but gives ample support in his few scenes and musical numbers.

The alternating story line is that of Sad Sack (Quinn Mattfeld), a character created by cartoonist George Baker which went on to a long running comic strip which ran from 1942 – 1957 and led to the 1957 Jerry Lewis movie. Sad Sack is not only an inept, bumbling soldier but he is always looking for ways to get out of any assignment. As this clown character, Mattfeld adroitly plays up the farcical elements as well as the continual physical comedy needed for the pratfalls. As Mary’s superior, McAleesjergins is an authoritative presence throughout and reveals a remarkable contralto in her one solo number, the torchy “Poor Lonely MP” (Frank Loesser). 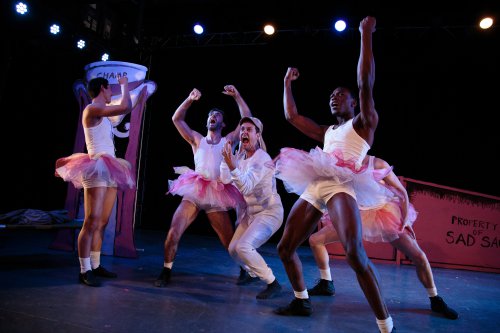 The Frank Loesser songs are the most accomplished but the work of the other songwriters also makes its mark. Jerry Livingston/Hy Zaret’s “Gee, But It’s Great to Be in the Army,” and the later version “Who Says It’s Great to Be in the Army” is reminiscent of the more famous Irving Berlin’s songs for his This is the Army. Several of the songs for the women (“Something’s Been Added to the Army,” “Twenty-Five Words or Less,” and “New Style Bonnet”) are the clever work of Ruby Jane Douglass.

Loesser is responsible for the hilariously witty army satires, “Classification Blues” and “Why Do They Call a Private a Private.” The majority of his songs that could stand alone like “Way Down Texas Way,” “When He Comes Home,” and “Lost in a Cloud of Blue” (beautifully sung by Swenson) resemble his movie scores, rather than his later Broadway shows. North’s “Report from the Caribbean,” another song that could be used outside the show, has a terrific foot tapping beat. The finale by Hugh Martin & Ralph Blane’s “America (Is the Place for Me)” is reminiscent of their nostalgic score for Meet Me in St. Louis, released about the same time.

Ridgely’s direction is always brisk and the bawdy jokes always land. Musical director Sonny Paladino who also reconstructed the score with Isaac Alter gives the music a decidedly authentic 1940’s beat. The dances have been created by Patrick McCollum for the singing chorus and Limón Dance Company’s artistic director Colin Connor for the company members. While none of them are major rediscoveries, they are suitably serviceable for the purposes of the show. Andrea Lauer’s scenic design is minimal but much like what must have been used originally giving the show an authentic look, while her many costumes add to the army atmosphere of the period. Simon Cleveland’s lighting design and Josh Millican’s sound design are entirely proficient, and surprisingly fine, belying the fact that the show takes place on a hangar deck.

Blueprint Specials is obviously a period piece redolent of the army life in the 1940’s. However, the witty and accomplished score with its unfamiliar lyrics and tunes and the first rate production by Tom Ridgely make this more than just a lost artifact. Hopefully, other groups around the country will stage the show for appreciative audiences.

Waterwell & The Public Theater’s Under the Radar Festival