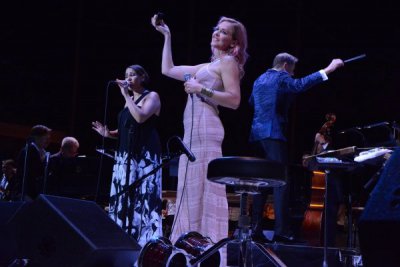 The New York Pops is back in a big way this summer, adding yet another brand new event to their yearly calendar. In an attempt to expand their fan base and reach an even larger audience outside of Manhattan, The New York Pops celebrated back to back performances at Forest Hills Stadium in Queens, on August 6 and 7. In what hopes to become an annual event, the New York Pops brought in some heavy hitters for the inaugural performance. After an opening night featuring Broadway’s own Sutton Foster, The New York Pops followed up the act on Saturday night with guest performers Pink Martini.

Known for their eclectic musical repertoire, Pink Martini have become an international phenomenon and now tour the world with nearly a dozen in-house vocalists. Saturday night was no exception, and the set list that accompanied the evening was one which mixed some of Pink Martini’s most popular hits, with a collection of vocal standards and fan favorites.

The song that made Pink Martini famous, “Sympathique,” was performed early on and welcomed much applause. Performed by China Forbes, one of Martini’s resident vocalists, “Sympathique” is a genre bending song which received critical acclaim internationally. Though Forbes was one of featured performers of the evening, all the vocalists associated with Pink Martini were top notch. As a whole this was as well-polished an evening of standards that one could ask for. Other highlights include Storm Large’s charismatic performance of “Quizáas, Quizás, Quizás.” 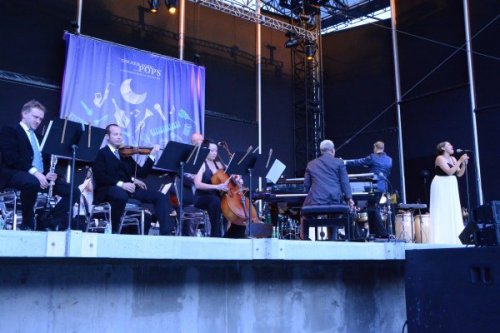 Steven Reineke, Conductor and Music Director of The New York Pops, was in complete command of the orchestra the entire night. A celebrity in his own right, Reineke’s musicians were dynamic and flawless as Pink Martini moved from style to style. In tandem with bandleader and pianist Thomas Lauderdale, founder of Pink Martini, Reineke was clearly having a blast on stage, and both men worked off of each other to fill the silence between songs with some welcome witty banter. In a thrilling instrumental to conclude the first act, Reineke and Lauderdale unleashed “Flying Squirrel,” a Pink Martini original which brought many audience members to their feet and sent many more very happily into intermission.

On their own, Pink Martini is an infectious and original ambassador for classical stylings in a contemporary world. With the added artillery of The New York Pops behind them, Pink Martini rang through the chambers of the Forest Hills Stadium in what amounted to a refreshing and inspiring evening of standards.