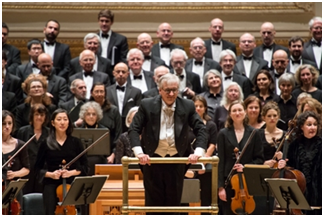 On April 25, 2014 at Carnegie Hall, The Cecilia Chorus of New York presented a concert of four works centered around themes of spiritual exploration, belief and unbelief. Mark Shapiro, music director and conductor of The Cecilia Chorus, explained in the program notes that the evening would present an exploratory voyage through the spiritual cosmos, searching out the individual’s place in the universe. Taken together, the four works constituted a fine affirmation of music’s ability to explore matters of faith.

The concert opened with a good account of Ralph Vaughan Williams’ Toward the Unknown Region (1906). The surprise of the lushness of this piece is that Vaughan Williams wrote music so thoroughly spiritual about a text so pulsingly sensual. The chorus clearly enjoyed singing this work, lavishing enthusiastic care on both its mellifluous subtleties and its symphonic swells. At the beginning of the piece, the chorus seemed in somewhat better control of their material than the orchestra was, but the performance became better and better as it progressed.

Toward the Unknown Region effectively set the context for the rest of the evening, providing a fine introduction to Tom Cipullo’s piece and then to the two familiar pieces by Brahms and Bruckner in the second half.

Johannes Brahms’ 1881 Nanie, written in memory of his close friend, painter Anselm Feuerbach (1829-1880), is based on Friedrich Schiller’s 1799 poem on death and immortality. Brahms’ writing throughout is achingly beautiful; the music is tender and lush. This first-rate performance, characterized by a balanced and graceful partnership of chorus and orchestra, beautifully conveyed Brahms’s understanding of immortality: created and preserved by art, it is a participation in the eternal, and, like the eternal, is both rich and delicate, large and intimate.

Bruckner’s Te Deum concluded the evening. Bruckner’s 1884 setting of the ancient Christian hymn of adoration, supplication and celebration is magisterial and commanding. Although the chorus and orchestra were marvelous in this performance, the soloists were uneven. Tenor Noah Baetge’s expressive and large voice was splendid during those brief passages when he sang alone. Soprano Kristina Bachrach’s and mezzo-soprano Virginie Verrez’s lovely voices were well matched to each other, but, like baritone Michael Anthony McGee’s voice, were simply not strong enough to meet Baetge’s voice. The quartet that begins Te ergo quaesumus sounded at first like a tenor aria accompanied by soprano, mezzo and baritone in the distance. Happily, under Shapiro’s direction, the soloists were sufficiently attentive to each other so that these pronounced balance problems had straightened themselves out by the concluding quartet. The monumental and dramatic conclusion of the Bruckner was bracingly gorgeous.

Contained within the fine familiar musical literature of the evening and performed as the second half of the first part of the concert was the exciting premiere of Credo for a Secular City by Tom Cipullo, commissioned by The Cecilia Chorus. Cipullo’s program notes summarize the work’s main subject. It would be a Credo that embraced doubt with equal fervor as belief, Cipullo wrote, but also one that celebrated those things that are our closest link to the truly divine; the beauty of nature, the power of music, and the fundamental goodness of people. Cipullo has indeed succeeded in creating a work that, while affirming neither orthodox faith nor formal agnosticism, nonetheless proclaims the power of thought itself as a manifestation of both creation and creativity.

Throughout the piece, baritone Michael Anthony McGee was marvelous: he sang with easy command and authority. His voice, though not powerful, is capable of tremendous subtlety and expressivity; according to the various texts’ demands and assumptions, McGee was equally credible as omniscient prophet who knows to wait for the spark from heaven to fall (Interlude 2) and as introspective spiritual seeker who feels the unspeakable desire/ After the knowledge of our buried life (VI. The Buried Life).

The music of Credo for a Secular City is highly referential: the score is dense with direct musical quotes and stylistic allusions to great monuments of sacred choral literature. The libretto, which includes portions of the Nicene Creed and references to Descartes’s attempts to prove the existence of God in addition to poetry and aphorisms, functions almost as a common-place book. In less skilled hands, this material might have a show-off or fancy know-it-all quality to it. But Credo for a Secular City is a mature and accomplished work; its intellectual literacy is part of its very nature.

Cipullo’s writing for both chorus and orchestra is rich and evocative; if the textual conversation of this piece is about faith and belief, its landscape of musical sound is very much about nature’s moods and movements as the context within which people’s thinking and speculations must take place.

The closing chorus, I Was Never Able To Pray, was especially wonderful. In spite of the final poem’s wistful uncertainty of tone and content, the musical conclusion was shaped by both urgent American optimism and graceful sweetness. The warm applause that greeted the composer when he came to the stage to take bows with Shapiro, McGee, chorus and orchestra was well deserved indeed.