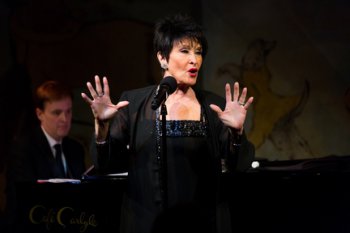 Chita Rivera in performance at the Café Carlyle with Michael Patrick Walker at the piano (Photo credit: David Andrako)

What was self-proclaimed “West Side girl” Chita Rivera doing in a chic East Side boîte?  She was taking the sedate Café Carlyle by storm—that’s what she was doing.  And she did it with style, not to mention age-defying energy.  This triple threat—dancer, singer, actor (with dancing always coming first)—performed a program especially fashioned for the smaller scaled Café Carlyle, yet still managed to exude spectacular passion, musicality and more than a few zingy dance steps. She led her audience through a carefully chosen song-list, most of which was associated with her Broadway career.

She began ironically with “I Won’t Dance” (Kern/Feld/McHugh) which she paired with Irving Berlin’s “Let Me Sing and I’m Happy.”  In a loving nod to the late, great Bobby Short whose career was so closely associated with the Café Carlyle, she sang a lovely, dreamy “Not Exactly Paris” (Michael Leonard/Russell George).

She ran down the list of her Broadway co-stars:  Ricardo Montalban, Donald O’Connor (the disastrous Bring Back Birdie), Antonio Banderas (upon whose shoulder she placed a shapely leg in Nine) and, her admitted favorite, Dick Van Dyke, with whom she co-starred in Bye Bye Birdie from which she sang “A Lot of Livin’ To Do” giving it a sassy, winking interpretation making it impossible to deny that the title is very on the mark. It wouldn’t be a Chita Rivera show without a mention of her iconic Anita in West Side Story.  A meeting with Leonard Bernstein to go over her songs just after she had been cast was nerve-wracking as she never had considered herself a singer.  History has proved that her singing almost equals her dancing.  “A Boy Like That” and “America,” complete with some mini-choreography were nothing short of electrifying. 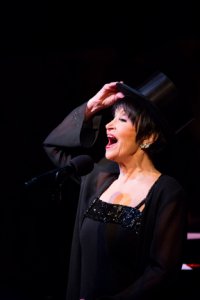 Gwen Verdon and Bob Fosse got her involved with Sweet Charity, trusting her with the lead in the national tour and a plum role in the film (the finest visual evidence of Rivera’s spectacular dancing), following it all up later with Chicago which brought Kander and Ebb into her life.  She claimed they gave her her theatrical voice.

She devoted the bulk of the rest of her show to their songs beginning with “Nowadays” in which she movingly imitated Verdon’s voice and demeanor.  From The Rink, “Chief Cook and Bottle Washer” became a one-act comedy, and from her recent The Visit she sang the guts out of “Winter” and “Love and Love Alone,” her eyes communicating as profoundly as her singing.

After a short paean to John Kander’s skill with vamps, she almost tore the house down with “All That Jazz,” with the richest singing of the evening.

She ended on a meditative note with Carol Hall’s tender “Circle of Friends” as a tribute to all her beloved friends, many no longer with us.

Her terrific band was led by Michael Croiter from the drums where he sometimes seemed to surprise Ms. Rivera with his rhythmic riffs.  Michael Patrick Walker was on the piano, Jim Donica on bass and Dan Willis on reeds, all of whom had long solos that gave many colors to the arrangements.

Running time:  one hour and 15 minutes without an intermission