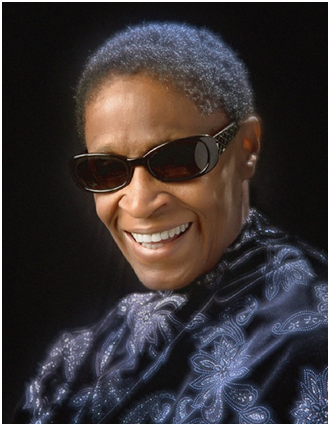 They say life is a cabaret. That is certainly true for Peggy Eason who wowed the crowd at Don’t Tell Mama on June 9th with her powerhouse performance of “I’ll Show Them All!” about her challenging and awe-inspiring life. Starting with her song, “Black, Blind, and Beautiful,” she won the audience over on the first note and her smile and wit sealed the deal. Blind since birth, Peggy never let her lack of sight hold her down. In fact, in many ways, she has more vision than most sighted people. She demonstrates that attitude is everything, calling her blindness an inconvenience rather than a disability. Her grandmother, a wise woman, told her to “never let anyone put limits on you.”

Peggy, also known as the Chocolate Diva, is living that advice and focuses on the gifts that God has given her rather than on her limitations. She believes that God’s purpose for her is to inspire and uplift others with her story through song. “God, you have given me a voice,” she says. “Please help me use it.” And that He has! Her deep, resonant voice comes from somewhere deep inside, revealing an honest, vulnerable, and yet joyful spirit that knows what’s important in life and doesn’t let anything stop her from living it to the fullest.

In “I’ll Show Them All!,” she laid out her life with songs like “Here I Come,” “You and Me Against the World, “I’m All Smiles,” and “The Colors of My Life,” but the one that had everyone singing along with her was “God Bless America.” All of us there became part of her moment. Singing since she was seven, Peggy has a way of touching your heart from the second she walks out on stage until she walks off, and although the show comes to an end, her message and her spirit stays with you. She makes you realize that anything is possible with God, an education and determination. Oh, and let’s not leave out humor. She had everyone laughing throughout her performance! The show, which lasted nearly an hour, left you wishing it would go on all night. She herself said, “I could sing all night but then I would have to charge you more.”

Award-winning director Lennie Watts lived up to his reputation for his part in making the night a success and acclaimed musical director Steven Ray Watkins brought the piano to life with his accompaniment to her songs. It was a first rate show and, for those of you who missed it on June 9th, there is good news! You can catch the Chocolate Diva for an encore performance at Don’t Tell Mama on June 15th.