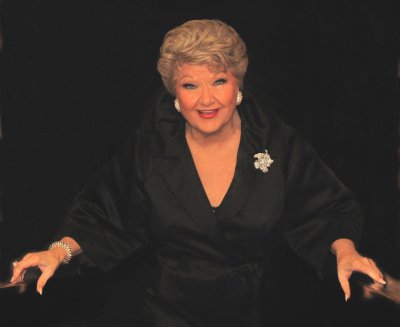 Marilyn Maye isn’t in Kansas anymore. These days she is storming the Big Apple, most recently touching down at the Metropolitan Room where she has continued to light a fire she started back in October 2006 when, in just one night, she generated a spark that helped inaugurate this charming new night club. She hadn’t performed in New York City in 15 years and this event marked her return to its exciting music scene. This is her 16th engagement at the Metropolitan Room since then and she has established a tradition of singing in the New Year here. She has also added an after-party series of shows known as “Marilyn by Request.”

On the night I attended, she packed the house. She chose to sing request songs that were heart-warming and uplifting. For the first 10 or 15 minutes, she sang medleys about love and friendship. Then she stopped to engage the crowd in the story of her journey to New York from Kansas and how she was re-routed several times to various cities around the country before boarding the plane that would take her to her destination. She took it all in stride but left one wondering if it would have been faster and easier to fly by cyclone.

She flirted with her band as well as the audience, delighting them with her humor and charm, and a few more stories. At one point, she grabbed the eyeglasses off the face of her piano player and put them on her own. She also enchanted the audience by embracing them in a toast. She was even so brash as to comment to two of her friends sitting at opposite sides of the stage that they had great seats because one of them had a great view of her piano man’s butt and the other the back side of her drummer. Everyone howled.

The crowd went wild when she sang some iconic favorites and became silent so as you could hear a pin drop when she crooned out others. Maye sure knows how to work a room. This snazzy, jazzy one-of-a-kind artist sang a lot of ballads, Broadway tunes and anything fabulous. Only the best would do for this phenomenal performer. Among the highlights were “Luck, Be a Lady Tonight, “Guess Who I Saw Today,” “Country Boy,” “That’s Life” and “I’m Still Here” which was very apropos.

One would think that after all these years her voice and appeal would be fading but this dynamic performer will not go quietly into the night. Her energy and passion, her zest for life, and her deep, powerful voice keep her on top of her game. At 87, she is still beautiful. Also her incredible attitude and sense of humor won’t let her get old. It is easy to see why she continues to be a sensation. She is dazzling in her sparkly clothes and jewelry and her electrifying presence lights up the stage. She is feisty and fun and still full of life as she talks of enjoying the ride down the mountain. 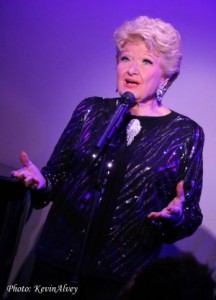 After three husbands, a meaningful love affair, and no regrets, she continues to look for new adventures and an exciting future. The best may be yet to come for Maye. One thing is for sure: she is truly an inspiration. She not only ages gracefully, she bridges the gap between young and old with the magic of her singing, re-igniting the older set with the passion of their youth and making the songs fresh and new for those too young to remember them. She is timeless.

On this night, she was backed up by her piano accompanist and musical director Billy Stritch, bass player Tom Hubbard, and drummer Daniel Glass. The chemistry between them all was magical. Jean-Pierre Perreaux, the night club’s technical director, produced just the right amount of sound and soft lighting to set the mood on the small, plain stage. Maye’s voice was flawless as she belted out song after song and one could only marvel at her vocal ability and stamina. She performed for more than an hour without stopping to take a breath. No wonder she has so many adoring fans.

A living legend from Kansas, Maye acted and sang her way into stardom as a young child with her contagious smile, engaging personality, and undeniable talent. Her great tenacity didn’t hurt, either. It all started when she won a 13-week appearance on a local radio station in Topeka, Kansas, at age nine. She catapulted to fame after being discovered by Steve Allen while doing an 11-year engagement at the Colony in Kansas City. The rest, as they say, is history.

Her career spans several decades and her accomplishments are too many to mention but there are at least a few that should be noted. Maye holds the record for having the most appearances on The Johnny Carson Show, 76 in all. After one of her performances there, Johnny turned around and said, “And that, young singers, is the way it’s done.” A Grammy nominee for “Best New Artist” in 1965, she competed against talents like Sonny and Cher, Herman’s Hermits, and the Byrds but, ultimately, she was beat out by Tom Jones.

She put out seven albums and 34 singles while she was with RCA and was the first to record some of our most cherished Broadway songs before they even opened like “Cabaret,” “Sherry,” and “I’ll Never Fall in Love Again.” Her “Too Late Now” was selected by The Smithsonian Institution as one of the 100 best recordings of the 20th century alongside compositions by greats like Billie Holiday, Frank Sinatra and Judy Garland.

The Philadelphia Inquirer once said of Marilyn, “Calling her a cabaret singer is like calling Pablo Picasso a painter; it’s true all right, but it leaves a lot out!” In September 2014, Elizabeth Ahlfors wrote in Birdland, “Like drum rolls and colored lights, Marilyn Maye is pure show biz, electrifying the room when she steps on the stage. She comes from a time when cabarets were night clubs and the vibe was entertainment. This magical musician has many moods – she is a treat, a bonanza. She’s entertainment!!!

That about sums it up.