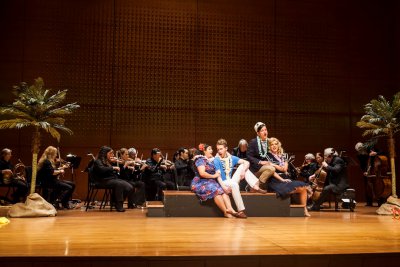 Once again, remaining true to the mission of the American Classical Orchestra he founded more than thirty years ago, conductor Thomas Crawford has chosen to champion a rarely performed baroque work and effected a happy and attractive presentation of it. In the case of Franz Joseph Haydn’s L’Isola Disabitata, Crawford’s period orchestra played well and the four soloists – the only singers – all disciplined, accomplished and gifted young artist, sang with enthusiasm and verve.

Set to an extremely popular libretto by Pietro Metastasio, the plot of Haydn’s 1779 chamber opera is straight-forward. Costanza and her young sister Silvia have been living alone for 13 years on a deserted island; bitter and broken-hearted, Costanza mistakenly believes she was abandoned by her callous husband – unaware that he was captured and enslaved by pirates after the shipwreck – and has raised her little sister to hate men. In fact, escaped from the clutches of the pirates, Costanza’s loyal husband Gernando has been looking for his lost wife for years. Now, at last, with the help of his friend Enrico, the right deserted island has been found. As the men explore the beach, Silvia comes upon them and discovers that men are not beasts after all, Costanza and Gernando are reunited at last, and Enrico and Silvia fall in love. The young couple’s love is a new creation; the married couple’s reunion is a renewal. It is a happy ending, without irony or ambivalence.

The two men by and large performed well. Tenor Owen McIntosh played an earnest and determined Gernando though he lacked what might have been some anguish after more than a decade away from his wife and seemed occasionally insecure in his singing. Baritone Timothy McDevitt’s Enrico was a sturdy friend to Gernando and then an attractive lover for young Silvia. McDevitt’s artistic sensibility seemed more evocative of modern operetta than Baroque chamber opera, but in this particular staging and interpretation of the work, McDevitt proved the right man for the role.

Sarah Brailey’s Costanza was lovely. She made a credible transition from forlorn, bitter hopelessness to fully re-enlivened mature love. Without any musical compromises to her execution of Haydn’s music, Brailey’s sad opening arias were psychologically flat in emotional affect, and by the end, her singing was lively and joyful, a rare feat of both singing and acting skill.

The most psychologically complex role is Silvia’s. Over the course of the opera, she moves from childlike naïveté to loving generosity of heart.  Energetic and intelligent, she unlearns her sister’s morbid lessons about men’s wickedness so completely that as a newly emerged adult, she falls in love without reservation or fear. Sherezade Panthaki’s Silvia was marvelous: the full evolution of her character was reflected in singing that moved from light sweetness to exuberant, vigorous sensuality. In her artistry, Panthaki made her Silvia a young woman with neither inhibition nor fear; Panthaki took every possible risk with Haydn’s music and made it all feel like happiness in the process of being discovered. 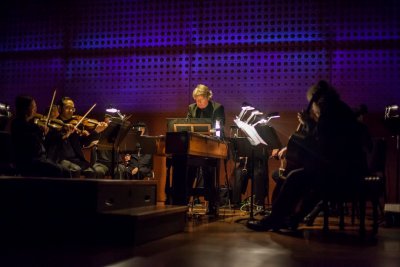 The 21 musicians of the orchestra were seated on the stage behind the singers; Crawford conducted from the harpsichord. Crawford brought out the best in these skilled musicians: all individually skilled artists, they achieved, under Crawford’s leadership, a fluid, successful collaboration as a chamber orchestra. In the somewhat unusual placement of the orchestra behind the singers who performed on the stage close to the audience, acoustical balances might have been difficult to achieve. However, Crawford’s control of the instrumentalists and singers’ sounds within the bright acoustical space of Alice Tully Hall was consistently and commendably effective and clear.

Haydn’s L’Isola Disabitata is not a major work: it is slight and ephemeral. But it has some compelling virtues. The opening overture is a perfect paradigm of evocative, colorful thunderstorm music. The dramatic progress of the story is marked by melodies carried forward in increasingly complex and interesting variations. Unfortunately, some of the narrative recitatives plod more than they lilt and the orchestral writing is uneven. Towards the end of the work, the characters’ arias are more fully developed; duets of musical depth mark the couples’ progress towards their happy endings; the final quartet is genuinely marvelous.

The team that put together the opera’s spacious and sunny staging – Cynthia Edwards, stage director, Liene Dobraja, costume designer, and Anne Dechene, stage manager – significantly enhanced the overall artistic value of this production. The minimal stage setting of four palm trees and several boulders, and a few, well-chosen props – a stuffed fawn, binoculars, bright yellow beach blankets and multicolor sun umbrellas – were all used to fine effect. The singers moved in and around the stage space with relative ease, making it plausible as an exotic island locale. The campy mid-twentieth century tropical preppy-wear costumes contributed an air of modern wit to the chamber opera, revealing the charms of the Baroque piece by removing it from period-piece claustrophobia.

Crawford, as usual, has given us a lovely present: the opera has moments of fun and moments of beauty. Brailey and Panthaki especially have now secured for themselves near-bravura arias that should become parts of their regular repertoires for individual recitals. However, in preparatory publicity and his pre-concert talk, Crawford made claims for the greatness of this work that seem unwarranted. Unfortunately, even in the most generous judgment, L’Isola is good, but not remarkable.

However, the production was fun – the singers and Crawford all looked as though they were having an awfully good time – and the artistic and intellectual integrity of the project was unassailable.