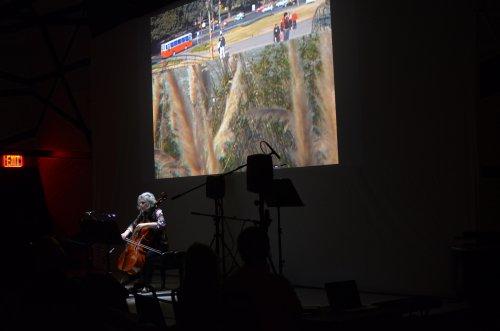 Within the second half of the 2017 New York City Electroacoustic Music Festival performed at Brooklyn’s National Sawdust in the last half of July, there were a number of particularly fine pieces devoted to political disasters, social protest and the quest for peace. Most of these, though not all, were in Concert 24, “A Concert for Peace and Social Justice.”

One of the most eloquent of these was Jorge Sosa’s Elegy for the Victims of Gun Violence for recorded musical sounds and cello, featuring Madeleine Shapiro: like most successful political protest artworks, this piece works because it is specific both to its occasion — a confrontation with gun violence, “an epidemic, a disease that spreads senselessly and at random” – and because it is a forceful universal expression of despair at the human capacity for self-destruction. The score calls for an interplay of recorded sound and live cello. Romantic symphonic music of tragedy and loss is evoked without compromising the twenty-first century edge of industrialized brutality. The cello functions as the voice of both mourning and oracle; Sosa’s cello writing combines traditional and radically non-traditional uses of bowing and fingering to make the instrument into a human voice that transcends particular time and place.

Leo Chang’s St. Louis Blues for recorded music, sounds and live trumpet with wonderful trumpeter Steven Holzer illustrated both the successes and the pitfalls of mixed media composing. The piece represents a converging of the blues city’s long tradition of mournful jazz with anguish over the recent police violence against African American boys and men. The plangent jazz trumpet mourns as the audience hears news reports of shootings and citizens’ angry disbelief – “not where I grew up” and “what happened to Rodney” – and sounds of increasingly harsh musical ugliness. Portions of the piece feel lopsided, but in the end the braid of live trumpet, recorded music and recorded, sometimes distorted human voices is so terribly tight and thick that its dark strength is compelling.

Interestingly, some of the most raucously explicit material of protest came not from the Peace and Social Justice Concert 24 but from the Wil(helms/liams)burg Concert 26, a collaboration of musicians and performing artists from Brooklyn and Hamburg, Germany. In the opening work, Trumpen, for clarinet, piano, cello and laptop performers, Georg Hajdu created a piece based on the destructive and fracturing words of Donald J. Trump. This piece introduced the Unheard-of//Ensemble – Ford Fourqurean/clarinet, Daniel Anastasio/piano and Thea Mesirow/cello – who played throughout the concert, demonstrating remarkable technical control and versatility; this group “is a contemporary chamber ensemble dedicated to the development and performance of new music by living composers.” In Trumpen, Trump’s words are altered and devolved into an ever-increasing intensity of chaos; the audience is witness to the mess – and is part of it as well – as this replicates political protest at its best, at once ancient and contemporary. 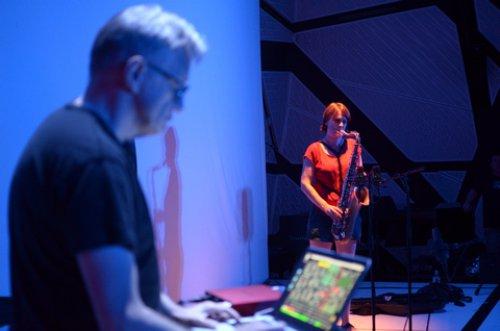 Concert 26 concluded with a political protest piece of considerable raucousness. In Howie Kenty’s The New Dark Age (v2.5), performers in masks of silver and colored lights began a mime piece that had the feel of an old movie or carnival accompanied by huckster and snake-oil music; performers and audience responded to “Applause” signs; patriotic music gradually went sour and a white-caped crusader – savior, ring-leader, sycophant, President – strutted until he fell, and the performers and music alike collapsed into chaos. This was not a particularly subtle piece, but it was darkly exuberant and captured the wretched energy of unnerved shock at recent electoral politics.

Gviniashvili’s “response to the ongoing Syrian tragedy”opens with recorded news accounts of atrocities; emerging from different speakers around the performance space, the human voices are gradually changed into sussurations that evoke seashores or winds on dry landscapes. These sounds circle around in patterns of silence, increase and then crash; industrial wails are made to sound like mourning cellos and warning whistles became flute-like. Gradually, connecting narrative elements fall away so that only a continuous rasp of desperation remains; the piece concludes in a fortissimo crush of cacophony. The work is strong, but at twelve minutes, it would benefit from editing: its story could be equally well told if it were shorter.

One of the finest pieces in the Festival was Volness’ response to recent accounts of refugee displacement from the 2106 UNHCR report and of international enslavement from the current Global Slavery Index. In this work, mixed media sounds are ominous, insistent and ugly, developing over the course of several minutes into increasingly complex textures. This music intertwines with the emotions of Kelder’s sensuous, mournful and commanding viola in cycles of engagement and 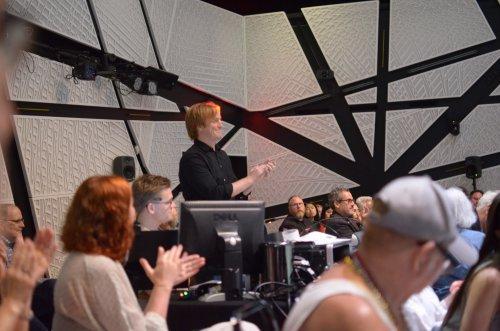 At one point, the only sounds are those of persistent electronic crackling and hiss, until the viola enters and, in tough, rhythmic bowing, pitches the music into wild desperation. The work concludes when fear and anguish are merged into one extended bowing of a single string note defeated into nothingness. The piece is an articulate translation into wordlessness of the terrible truth Volness observes, “The suffering we cause one another is astounding.”

As a whole, this protest music encompasses the full range of human response from dark humor to universal anguish; it is part of a time-honored tradition of artistic response to the political environment. The tragedies examined are profound, but music’s capacity to examine them serves as witness to humanity’s enduring creativity.

This persistent theme of protest is well suited to electroacoustic music: composers’ ability to reproduce, transform and use the modern world’s sounds enriches the artistic vocabulary of political response.