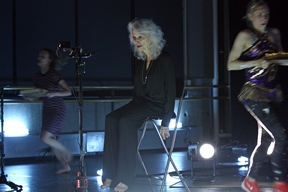 Auden Thornton, Judith Roberts and Tina Benko in a scene from “Who Left This Fork Here” (Photo credit: Hiroyuki Ito)

With the rapid advancement of technology in today’s society, it is becoming increasingly common to see different forms of media incorporated into performance pieces. In what is best referred to as a multi-media experiment, Who Left This Fork Here is a thought-provoking and visceral piece of theater that lies somewhere between a movement piece and an audio/visual experiment.

Conceived by Daniel Fish and Jim Findlay, Who Left This Fork Here—inspired by the emotional themes found in Anton Chekhov’s The Three Sisters—is a stark and jarringly honest piece which examines morality and aging through the eyes of three different female performers. Separated by nearly seven decades, the three women (Tina Benko, Judith Roberts, and Auden Thornton) each represent a different phase of a woman’s life.

As a girl at the peak of adolescence, Auden Thornton represents the vibrancy and excitement of youth. Ms. Thornton’s energetic performance becomes a stark reminder that as aging occurs, energy becomes scarce as one grows old. Representing a woman in her prime years, Tina Benko’s performance addresses maturity, the struggles one faces in becoming a fully grown adult, and the insecurities and fears encountered along the way. In a fragile and still performance as a woman in the midst of her senior years, Judith Roberts sits contentedly center stage; a woman reflecting on her past as a massive real-time projection of her face is displayed on the back wall of the space. 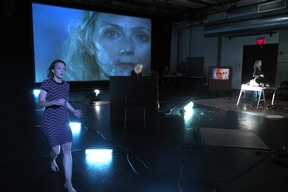 Auden Thornton, Judith Roberts and Tina Benko in a scene from “Who Left This Fork Here” (Photo credit: Hiroyuki Ito)

The use of this projection is just one of the many multimedia forms which are utilized over the course of the 60 minute performance. Multiple video cameras on tripods are set up all over the stage (some projecting a live-feed, others projecting prerecorded video), technical lights shine in uncountable directions, wires running from hardware tools are dragged across the stage haphazardly, and all the while distorted audio interspersed with recorded dialogue is played continuously in the background while the production unfolds. Also, nearly fifteen birthday cakes can be found scattered across the stage, which ironically are central to some of the most poignant and interesting action of the evening.

Presented by the Baryshnikov Arts Center, this world premiere event is a technical undertaking of massive proportions. Director Daniel Fish—in tandem with the audio and visual contributions brought to the table by collaborative partner Jim Findlay—has created a fascinating exploration of morality which is as thought-provoking as it is visually stimulating. Who Left This Fork Here is a painstakingly honest creation which is all at once unnerving, physically—as well as emotionally—exhausting, and exhilarating.

A thought-provoking and visceral piece of theater that lies somewhere between a movement piece and an audio/visual experiment.