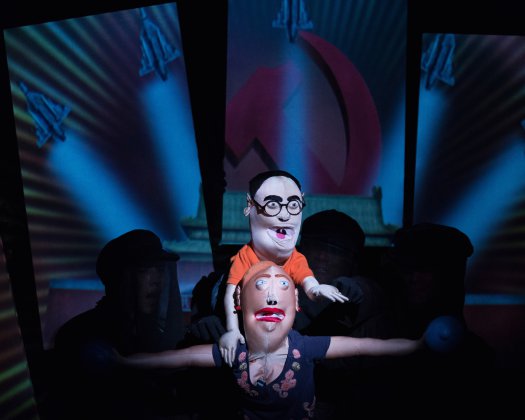 Peter Russo as Mary and Ariel Estrada as Eddie in a scene from “Made in China” (Photo credit: Heidi Bohnenkamp)

Puppets and the theater in the 21st century have proved to be a winning combination, one that has opened the doors creatively for some pretty obscure concepts. Made in China by Gwendolyn Warnock and Kirjan Waage (with help from the ensemble) is consistent with this analysis. This trippy tale follows two puppets whose ordinary lives are flipped upside down when they find a mysterious letter from some people in serious need of help.

When we first meet Mary (voiced by Wakka Wakka company member Peter Russo), a fiftysomething single woman who lives alone with her dog Lily, she is stark naked–the perks of puppetry–and planted on the couch eating leftovers. She doesn’t seem happy about her life so much as she’s just content with it. Mary eats her feelings, has a hard time getting Lily to obey her, and watches lots of reality TV.

Seemingly the only exciting part of Mary’s day is when her quiet time is disturbed by her loud next-door neighbor Eddie. Eddie, a single and middle-aged Asian-American, also has a dog–one that is constantly barking and woofing, and is the source of Mary’s frustration. Played by Ariel Estrada, it would seem that Eddie and his neighbor Mary have nothing in common other than their closeness in residence. 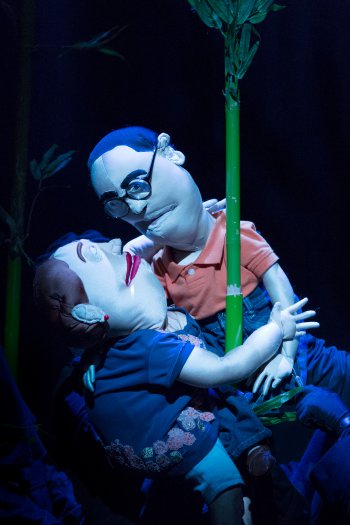 Peter Russo as Mary and Ariel Estrada as Eddie in a scene from “Made in China” (Photo credit: Heidi Bohnenkamp)

For about the first 45 minutes, Made in China appears to be just the story of two goofy human beings who have nothing in common, and seem to hate each other more so out of a fear of the unknown rather than because of anything more rational. This is all good and well until Russo’s Mary finds a mysterious note which she can’t decide to believe or not. Thinking that the letter is from somewhere in China, Mary turns to Eddie for some advice, and isn’t met with the warmest of receptions.

The ensuing journey is a bizarre and sometimes hilarious exploration of China and the culture within, even if it doesn’t always make the most sense. Made in China makes the most of the liberties that puppetry allows, and features some very impressive techniques and performances from the actors behind the scenes. Though the two main characters are both interesting, they are both made all the more entertaining by their canine companions. The two dogs, Lily and Yo-Yo (Dorothy James and Andy Manjuck among others) are completely lovable, and every single scene they are a part of is instantly heartwarming.

Unfortunately, the dogs are ditched about halfway through–when the shows big plot twist arrives–and the effects are noticeable. Mary and Eddie’s characters are not very amicable in nature, nor are they very likeable either. Sure, they are written genuinely, but as the show gets weirder and weirder, the focus strays from that of the duo’s relationship to an obstructive and confusing political commentary which is both distracting and unclear. 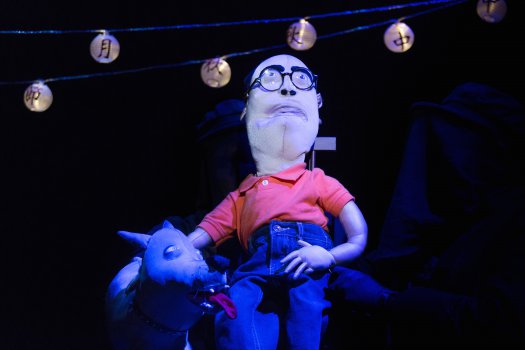 Andy Manjuck as Yo-Yo and Ariel Estrada as Eddie in a scene from “Made in China” (Photo credit: Heidi Bohnenkamp)

In addition to their writing efforts, Warnock and Waage also co-directed, and the joint efforts are noticeable in the consistency and conception of the production. The music by Yan Li is catchy, but the confusing message the story delivers overshadows the otherwise clever lyricism. The show is paced exceptionally well, and the production design by Yu-Ting Lin, Warnock and Waage is outstanding and immersive. The puppets, designed by Waage, are lifelike and eye-popping to look at, and the show in general is at all times visually striking.

Though Made in China is a beautiful show that begins with a lot of promise, the production is unfortunately bogged down by an inconsistent story that is simultaneously trying too hard and unsure of the message it intends to deliver. Save for that, there is enough laughter, sincerity, and puppet nudity to keep even the harshest of critics mildly entertained.