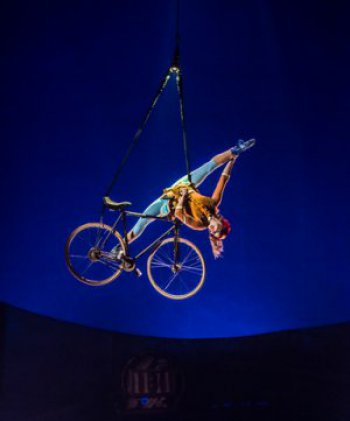 Cirque du Soleil’s 35th production, Kurios: Cabinet of Curiosities, has a fascinating premise: the collections of a Victorian scientist come to life while he is otherwise occupied. While the show itself is colorful and has some intriguing new acts from the circus venue, it does not live up to its possibilities. As there is no narrator or voice-over, the characters and acts do not make up a plotline. Without the souvenir program, how is one to know the meaning of the Seeker, Klara, Mr. Microcosmos, Nico The Accordian Man, and Mini-Lili? In addition, the exotic nature of the acts is not explained as notes or a program is not provided. However, it is possible to enjoy the colorful show as just one more impressive display of remarkable human feats.

In the new show written and directed by Michel Laprise with  the now standard international cast, some of the dazzling acts are novel and surprising which will leave you asking how did they do that. In the first half of the show, Anne Weissbecker rides a bike which takes off and performs acts on the high wire. In “Upside Down Diner,” the Ukraine’s Andrii Bondarenko balances on a set of chairs that go ever  higher while from the ceiling the same event is enacted upside down. James Eulises Gonzalez Correa (from Colombia) dressed as an Aviator balances on tubes on a metal platform suspended in mid-air in “Rolla Bolla.” 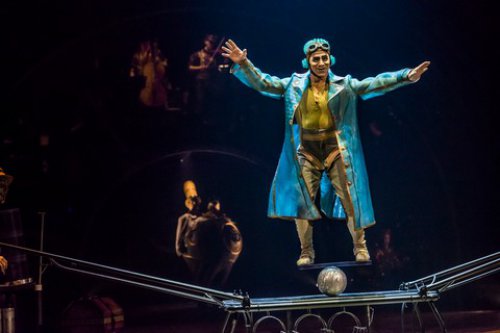 In the second half, brothers Roman and Vitali Tomanov (United States) appear as Siamese Twins hanging from the air on straps as they separate and perform a series of acrobatic passes, sometimes in tandem, and sometimes solo. Spain’s Nico Baixas, hand puppeteer extraordinare, performs an act with others in which a person appears to do a series of actions as well as falling in love, with the puppets dressed in miniature shoes and hats, all projected on a hot-air balloon which hovers center stage.

Some of the acts, however, do not make the impression they are intended. Argentinian Facundo Gimenez’s Invisible Circus is just that: a tiny circus has performers we don’t see but must imagine as trapezes swing and the teeter board moves. The “Contortion” act of four extremely agile women from Russia and Mongolia (Imin Tsydendambaeva, Bayarma Zodboeva, Ayagma Tsybenova and Serchmaa Bayarsaikhan) on a giant mechanical hand is supposed to represent electric eels but there is no indication to tell us that that is the intent.  Dressed as fish, the artists of the “Acro Net” act perform trampoline feats with no explanation for their strange costumes. The Yo-Yo act by Chih-Min Tuan (from Taiwan) is arresting, but though he alternates between blue and yellow yo-yos, it is all too small to make much impression on the audience who sit too far away. The final act, “Banquine,” in which a group of 13 artists perform synchronized acrobatics and human pyramids is a great deal like other Cirque du Soleil feats in the past. 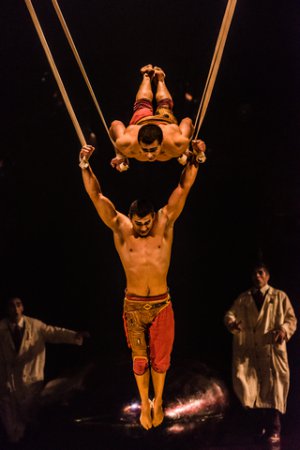 Visually, the show looks impressive with Phillippe Guillotel’s costumes mainly in variations on blue and yellow. Stéphane Roy’s set design includes Victorian steampunk machines that don’t seem to do anything and disappear for long periods of time, as well as robots and scientific objects like filaments under glass which appear to slide on and off on the circus ring itself. Martin Labrecque’s lighting always focuses attention where it needs to be. Eleni Uranis is responsible for the seemingly exotic make-up.

Cirque du Soleil’s Kurios: Cabinet of Curiosities has a wonderful premise and an eye-filling mise en scène. However, without the needed narration or program notes, the idea remains still in embryo. The problem one supposes is how to narrate a show that is intended for international audiences.

Kurios: Cabinet of Curiosities (through November 27, 2016)

The Grand Chapiteau on Randall’s Island