Paper bracelets in lieu of tickets give Bianco a night-clubby ambiance, the kind of night club that caters to the twenty and thirty-somethings.  Currently ensconced in a tent under the Brooklyn Bridge at the new St. Ann’s Warehouse, this distant cousin of the Cirque du Soleil aims for an easygoing informality and intimacy. From the ultra-friendly theater staff to the down-to-earth vibe of the acts to the reasonably priced drinks at the bar, Bianco aims to keep a spirit of youthful spontaneity between the performers and the audience.

Intimacy is a relative term here since Bianco takes place in a fairly large arena.   However, there are no seats so the audience members are forced rub shoulders as they mill about following the different acts to get better views around the perimeter of the single ring.

Fortunately, most of the show happens aloft, so even the shortest person won’t miss much.   The cast and crew keep changing the erector-set like décor to accommodate aerial and more earthbound acts which include straight trapeze bits, several variations on tightrope walking and juggling of various varieties, all to appropriately peppy music provided by a small, but energetic band lead by a vibrant Andy Moore who served multiple duties on vocals, trumpet, guitar.

Bianco is the artistic brainchild of NoFit State from Cardiff, Wales whose philosophy is summarized as follows:  “We celebrate the contradictions within ourselves and our work; we embrace the human condition in all its dirtiness.” 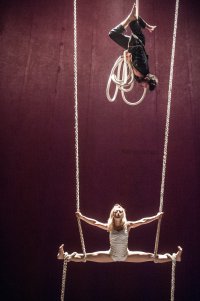 Whether the show reflects these noble—if pretentious—principles or not is subject to opinion.   By and large, the vigor, vitality, variety and skill of its performers are stimulating,  as in any other circus except that these performers seem to be all too human and accessible, running through the audience en route to and from performing their individual specialities.  They wear glamorously constructed workout wear (by Rhiannon Matthews) and not fantastical outfits.  That and the fact that they occasionally stumble on the wire or drop juggling pins—part of the act?—adds to their seeming approachability.

Bianco serves up a generous program of nearly twenty acts, a sampling of which includes:  straightforward trapeze (“The Art of Travelling” with Lyndall Mery and Anne-fay Johnston and the dreamy “The Snow,” a dance trapeze with Angelique Ross and Fred Rendell); variations on wire balancing (“The Boatman” with François Bouvier crouching while casually chatting then slipping into a near split); silk  and rope acts involving hanging, twirling, precipitous falls, etc. (“Epic Ropes” with Joachim Aussibal, Jess O’Connor, Edd Casey, Blaze Tarsha and Jani Foldi and “The Monk” with a charmingly languid Danilo Pacheco swinging around on two long stretches of cloth); “Spinning Cages” in which the ensemble hung off cage-like structures suspended in the air; “Aerial Juggling” which featured Junior Barbosa and Mr. Aussibal tossing things about while in precarious positions;  “The Dress” with Delia Ceruti and Mr. Aussibal in a vast white gown which is slowly revealed; and the delightfully odd “Klezmer Hula Hoops” which, as the name suggests, used catchy Klezmer music to accompany Ms. Tarsha and others standing atop the bar, twirling hula hoops on various combinations of limbs and other body parts.

The second act opened with “Swimming Pool” which had the performers jumping onto a trampoline—(at least I believe it was a trampoline) – from variously high perches on the central structure which was hidden by the milling crowd. 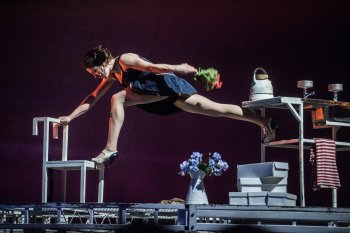 The general vibe was anti-technology, homespun, sort of old-fashioned and human scale—all of which, of course, is camouflage for extraordinary technical expertise both in the acts and in the way this show is run, as directed by Firenza Guidi.  Adam Cobley’s lighting was extraordinary.

Frankly, the main difference between Bianco and its sister circuses is its ambiance and not the acts, wonderful as they are.  Every circus has jugglers, tightrope walkers, silk artists and hula hoop masters, but Bianco presents them as people, not virtuosos (which of course they are).  This philosophy sacrifices awe for user friendliness.

Bianco is worth a trip to its river’s edge location under the bridge to satisfy a yearning for unpretentious entertainment in an era where for too long Cirque du Soleil has become the synonym for circus.