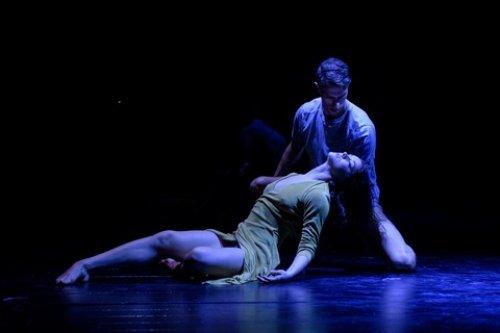 James Whiteside and Cassandra Trenary in a scene from “The Tenant” (Photo credit: Ian Douglas)

The flyer for The Tenant, a new dance play by Arthur Pita at the Joyce Theater, shows American Ballet Theatre star James Whiteside bare-chested, twice.  The upper photo is the masculine Whiteside, his pecs gleaming; the upside-down version shows him, pecs still gleaming—this time implying something different—in a long, feminine wig with lipstick coloring his mouth.  This, in a nutshell, is Pita’s version of Roland Topor’s 1964 novel, The Tenant (Le locataire chimérique), later made into a cult psychological thriller film by Roman Polanski.

I don’t know the original novel (except via Google), but I do know the film, one of Polanski’s deft voyages into the crumbling minds of innocent people.  Polanski piled involving incident upon surreal incident—including references to the Holocaust—to build up a frightening tale of the main character’s  (played by Polanski, himself) descent into a madness that mirrors that of the previous tenant of his new apartment.

Of course, Polanski had the benefit of a film production team and the full range of film vocabulary, techniques unavailable to Pita whose broader approach, though suited for the stage, lessens the intimacy of the storytelling.

Pita streamlined the plot into the spirit of a suicide taking over the mind of the next person to live in her posh flat, turning that character, Trelkovsky—the handsome Mr. Whiteside—into a sniveling, garish drag approximation of herself.  But, does he also commit suicide as did his predecessor?  Of course, or Pita’s posh stage version would lose any sense of structure. 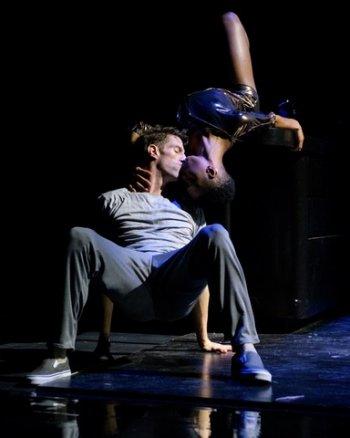 James Whiteside and Kibrea Carmichael in a scene from “The Tenant” (Photo credit: Ian Douglas)

Whiteside isn’t exactly misused, but rather underused and under coached.  No one should have laughed when he began his transformation into his female alterego.  Whiteside, used to the broader acting style of ballets on huge stages, can’t seem to find the telling details of his drastic, paranoid morphing into Simone of the death wish, not helped by the steps nor the direction he has (or has not) been given.  Whiteside appeared practically emotionless as he stared into a mirror—actually the audience—as he adjusted his very bad wig, applied more lipstick, stripped naked, tucked and put on a Whiteside-sized version of the dress that Simone wore when she flew off the top of Pita’s well-designed, complex set.

Pita’s set is probably his best contribution to The Tenant, a slick, glass-lined room featuring a walk-in closet with transparent walls, a projected view of a cityscape from a balcony and slick furniture that gets moved about, all in shades of white, black and grey.

As Simone, Cassandra Trenary, also an ABT member, somehow takes Pita’s clichéd combination of ballet, mime and modern dance and internalizes it, making it all her own.  She is sensational, warm and moving from beginning to end, despite being given only an outline of a character.  Even though the reasons for her suicide are never expressed—as they were in the movie—her feelings flew across the footlights without a single giggle despite the melodramatic throes of her movements, as she boozed, snorted cocaine and downed pills to give her courage to do herself in.

Filling out the cast is Kibrea Carmichael who played Trelkovsky’s girlfriend Stella and also a sleek, ghostlike figure who haunts him.  With very little stage time, Carmichael makes an impression as the confounded lover and the sinuous spirit. 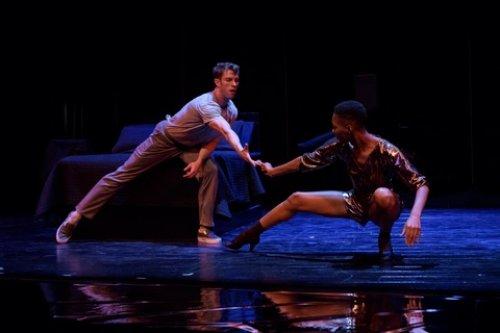 James Whiteside and Kibrea Carmichael in a scene from “The Tenant” (Photo credit: Ian Douglas)

Whiteside is valiantly following in the footsteps of generations of ballet dancers who have focused on theater rather than ballet, most recently Robert Fairchild, Amar Ramassar and Misty Copeland, all of who have placed their carefully turned out  dance slippers on the legitimate stage.

Binding the drama together was Frank Moon’s original score which played with Beethoven and other classical bits of music, while adding eerie sound effects, performed live.