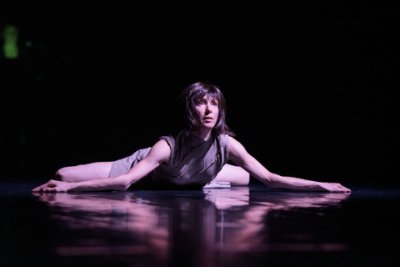 Sylvie Guillem, one of the most (justifiably) adored ballerinas ever, is retiring from the stage, which is sad.  Her Life In Progress, which just finished its run at the New York City Center, was both her farewell and a lovely gift to her New York public—a last, tantalizing glimpse at her lithe, musical and subtle dancing the kind in which just one lift of an elegant leg elicits the kind of reaction that greets only rock stars.

She presented works by four internationally respected choreographers, appearing in all but one, a duet, “Duo2015,” choreographed by William Forsythe, the American who, for better or worse, changed the look of choreography in the twentieth century.   In this work two fine male dancers, Brigel Gjoka and Riley Watts slithered, jutted elbows, knees, rear ends, walked and ran about, all to the occasional sounds of Thom Willems’ monochromatic, screeching score.  Dressed in not very flattering loose workout gear, the two men proved themselves agile and attentive to the minute changes in tempo and the demands of tandem steps, though no clear relationship—friendship? romantic?—was evident.

“Techné” was the opening work, a long solo for Ms. Guillem fashioned for her by Akram Kahn to a score by Alies Sluiter which ranged from muted held notes to vocalize to vaguely South Indian sounds, played live by the composer, Prathap Ramachandra and Grace Savage.  Dressed in a short, pale dress designed by Kimie Nakano, Ms. Guillem was focused on a tall wire sculpture of a tree, dead center.  She seemed to be worshipping this stark, leafless creation, falling to the floor, dipping into sensual pliés, whirling about the stage with abandon.  As the tree began to rotate slowly her entrancement became subdued exultation, leaving her prostrate by the tree.

“Here & After,” directed and choreographed by Russell Maliphant to a quiet score by Andy Cowton, strangely interrupted by scary thudding sounds, was a female buddy duet danced by Ms. Guillem and Emanuela Montanari, both dressed in loose workout outfits designed by Stevie Stewart.  Unlike “Duo2015,” the two dancers here often separated in long loping walks, lunging steps and slow crawls, but got together to offer support—literal and symbolic—to each other in gentle leans and off-balance poses.  They twisted their upper bodies and surrounded each other with large, rounded arms.  The mood was contemplative and cool. 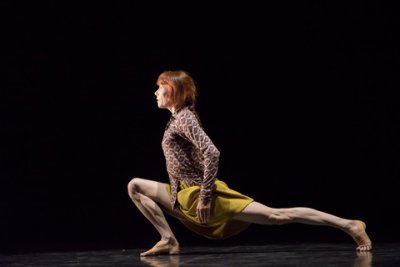 “Bye,” by Mats Ek was for some reason more amenable and meaningful on this, my second viewing,  perhaps because the City Center stage is more intimate than the David H. Koch Theater stage (where she last performed it) or, perhaps, the work simply grew on me.

On a portal shaped screen, films of Ms. Guillem (by the very clever Elias Benxon) are soon substituted by Ms. Guillem in the flesh.  She disappeared behind this doorway, only to reappear in the video.  When she got away from the screen, rolling and tilting, raising her great legs with soft expressiveness, the projected images changed to a group of people and a dog.  She slowly danced her way back to the doorway, joining the filmed community and wandering off into a bare, white space.  What a transcendent way to say good-bye.  For once, all the technical, choreographic and story elements gelled into a lovely whole.

The four works shared annoyingly pretentious program notes written by the choreographers, themselves that either over explicated or reviewed the dances, putting too much weight and faux meaning onto what were, in reality, lightweight ballets.  It’s always better for the audience to decide the meaning of a work.

Nevertheless, Ms. Guillem couldn’t have left us with a better impression of herself.   She is going out in tiptop shape, surrounded by great artists on a stage famous for its decades of terpsichorean brilliance to which she has added her own sparkle.