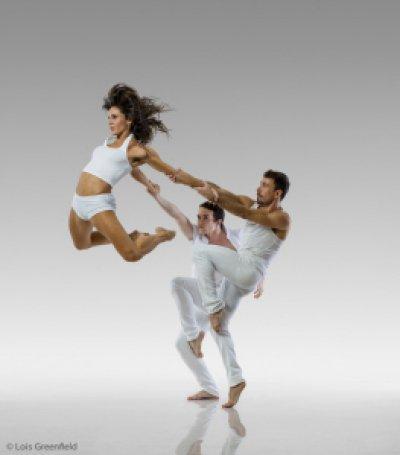 You can always depend on David Parsons for an evening of well-crafted, entertaining dances performed by great looking, powerful dancers.  His recent season at the Joyce Theater, Parson Dance’s New York performing home base, was reliably engaging, including several favorites plus a promising new ballet by a company member.

“Swing Shift,” from 2003, was one of the three full company works on the program. It was a fine opener with its combination of a many-faceted score by Kenji Bunch and zesty group work paced by telling duets for its eight dancers.  There was a great deal of touching of both the romantic and friendly kind.  “Swing Shift” was helped by the layered, pale pink costumes by Mia McSwain which featured back flaps that flew about as the dancers moved, or spread out picturesquely on the floor as they rolled about.  The title is a bit of a tease—implying a World War II period piece—but the overall effect was like watching eight close friends having fun.  The terrific lighting for this, and all of Parsons’ works, was by Howell Binkley.

“Finding Center” was a Parsons duet excerpted from a longer work.  Danced by Ian Spring and Elena D’Amario, it was a calm look at a troubled couple.  Wearing Naomi Luppescu’s simple clothing, the two hardly let go of each other in a series of tender lifts and soft-edged, twisty embraces bordering on hurtful.  They wrapped themselves about each other and performed intimate gestures, all to Thomas Newman’s gentle, lyrical piano score.

Two other Parsons works were on the gimmicky side, but audience favorites, including his famous “Caught” which has become the signature piece of this troupe.

In “Caught,” a solo dancer (in this performance Ian Spring) uses strobe light effects to make it seem as if he were floating across the stage, movements that were punctuated by bouncing into bright spotlights.  Mr. Spring’s fine, acrobatic performance was the closest I’ve seen to Mr. Parsons’ own brilliant interpretation. 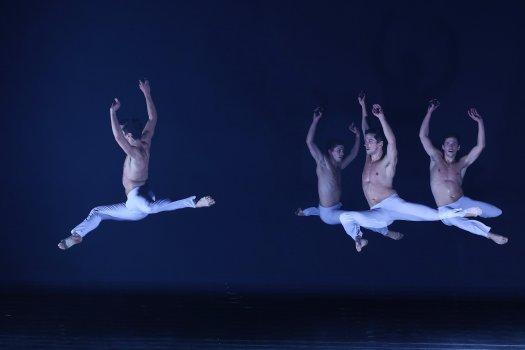 “Hand Dance” was exactly that:  five pairs of hands inserted into a bright beam of white light making waves motions, sequential gestures, mimed violin playing, etc. all to a bright score arranged by Bunch.  The timing was impeccable, but, Alwin Nikolais did this kind of thing better.

Parsons prefers to end all his works with a rousing finale danced by the entire cast.  Such was the case with th world premiere of “UpEnd,” a joyous hip-hop themed ballet created with Ephrat Asherie to a swift-moving score by Marty Beller.  Luppescu’s stretchy street wear outfits gave the impression that the five couples were competing with each other outdoors and having a ball doing it.

Company member, Omar Román De Jesús choreographed the second world premiere, “Daniel,” to a multiple-sourced score.  He took his eight dancers through a dramatic visit to those on the autism behavior spectrum, finding beauty, sadness and even some humor.  The emphasis was definitely on the darker elements with angular knee and elbow jutting  movements repeated over and over again.  Unlike his mentor, David Parsons, De Jesús dared to end his work with two sections that each used two dancers.

The next to the last scene featured a seated, cross-legged young man down front and a figure way upstage in near darkness standing alone.  The seated man twisted his body and pumped his arms in anguish while the standing man began to stamp his feet slowly, a step which morphed into an eerie tap dance.  The stark difference between the two men was heartbreaking.  The final scene was a duet for two men who led each other around, constantly supporting each other.  Were these two friends? Lovers? Strangers who just met?  The choreographer wisely left this up to the audience members’ imagination.  That De Jesús dared to end “Daniel” with the breathless duet and not the full cast was a brilliant choice, one that was heartbreaking and uplifting at the same time.