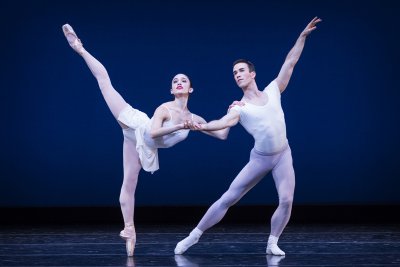 The Pacific Northwest Ballet is a welcome addition to this season’s dance scene.  The company has long been in the Balanchine orbit, so it was expected that artistic director Peter Boal—a former brilliant New York City Ballet principal, himself—would bring an all-Balanchine program.  Of course, he did, one that featured three works that displayed the incredible genius and range of, arguably, the greatest classical ballet creator of the twentieth century.

In the bright and sunny “Square Dance” (1957), to a score of scintillating Baroque Vivaldi and Corelli excerpts, Balanchine took classical and neo-classical ballet, American square and folk dance, Baroque dance forms (gigue, sarabande, etc.) and combined them with his usual brilliant wit, coming up with a blast of breathtaking movements, corralled only by strict stage patterns.

Originally, Balanchine had the small orchestra on stage with the dancers and had a real square dance caller shouting out the names of the steps.  Although I kind of regret the exclusion of the caller in this re-thought (1976) version, the ballet is still a joy to watch with its little repeated movement themes, such as a prancing step taken up by virtually the entire cast, little polite bows, lots of dos-si-dos and a step that Balanchine made famous in this ballet:  the gargouillade, in which each foot traces tiny circles in the air.

The cast, dressed in simple practice outfits, the corps de ballet in pale blue, the leads in white, were led by the youthful, smiling Leta Biasucci and Benjamin Griffiths who handled their mercuric partnering duties well while also holding the stage in their alternately fast and slow individual solos.

The second Balanchine masterpiece was “Prodigal Son,” the final work that the great impresario Serge Diaghilev commissioned.  Prokofiev’s moody, rough-hewn score and colorful, scenery and costumes by Georges Rouault which evoke a fanciful, ancient biblical era give Balanchine’s story heft.  The clever scenery includes wildly colorful backdrops and features a large wooden structure that ingeniously becomes a pathway away from the Prodigal’s home, a dining table, a stage and even a poignant place of crucifixion as the Prodigal writhes against it. 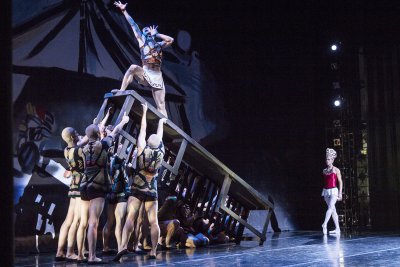 I have to confess that this was never a favorite of mine, but the PNB’s production was very persuasive, mostly due to a strong, muscular, well-acted and danced performance in the title role by James Moore who convincingly went from arrogant youth to wretched wreck.  Tall, leggy Lesley Rausch was a coolly effective Siren who masterfully seduces the Prodigal in a series of still shockingly explicit steps and partnering.  As his true Friends, Ryan Cardea and Matthew Renko were up to the fast-paced steps and exacting acting demands.  Joshua Grant was a towering and serenely moving Father who literally lifted the Prodigal into his arms at the end.  The all-male Corps de Ballet handled Balanchine’s raucous bits terrifically.

The final work is considered by many to be Balanchine’s masterpiece:  “Stravinsky Violin Concerto,” created for Mr. B’s monumental tribute to his late friend Stravinsky in 1972.  It is a totally surprising, remarkably fresh-looking and emotionally rich work, using Mr. B’s trademark black and white classroom wear to expose the seemingly infinite variety of steps and poses.

In this ballet, equal sized groups are pitted against each other.  In the opening Toccata, a mood of friendly, if angular, competition built as one line of dancers replaced another, twisting and dipping with great humor, immediately replaced by a similar grouping.

Two couples danced duets of remarkable expressivity to Aria I and II.  The first couple, Lesley Rausch and Jerome Tisserand appeared to be emotionally distant as they pulled off each other, made backward bridges, and barely looked at each other.  This duet’s iconic pose is the aforementioned arched bridge that never came across as a trick but as a logical response to the music and emotional state of the dancers. 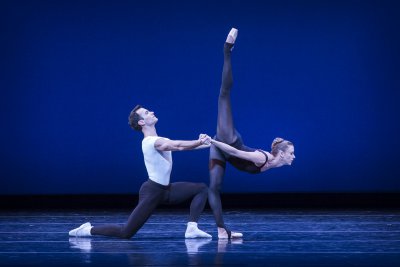 In the second duet, Noelani Pantastico and Seth Orza (also a NYCB alumnus) were heartbreakingly sad as they manipulated each other, he famously using his hands to turn her knees in, distorting her look and demeanor.  This was a couple at the end of their rope.

The Cappriccio brought the entire company on stage, ebbing and flowing, the two couples emerging to mix it up again to the bright, bouncy, often atonal finale.

How Balanchine managed to communicate not only emotional states but a sense of community is one of those mysteries of the creative mind.

The presence of a live orchestra led the list of pleasures attached to this evening, playing the three major, disparate scores.  Conducted by Allan Dameron (“Square Dance”) and Emil de Cou (“Prodigal Son” and “Stravinsky Violin Concerto”) the music was fresh and welcome, not to mention totally supportive of the dancers’ needs.

The dancing throughout was fresh and idiomatic.  The different styles of each work didn’t faze this group at all.

The fine lighting throughout was by designed by Randall G. Chiarelli.

The PNB also brought a second program of contemporary works, which, unfortunately I missed.