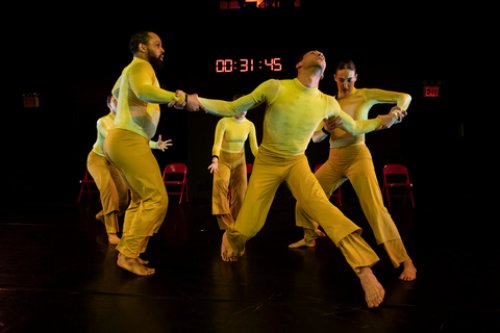 Freemove Dance is a company directed by Jenn Freeman who, if …it’s time… is any evidence, is full of ideas (even if some of these ideas came from the dancers).

Co-presented by The Theater at the 14th Street Y, …it’s time… explored the dynamics of a small group of five—excellent—performers whose existence appeared to be controlled by a large digital countdown clock that frowned down upon them from the back wall. They were all dressed in tight outfits in shades of yellow, uniforms designed by Mondo Morales.

To a stark, ingenious percussive score by Dani Markham, co-arranged and played brilliantly by drummer Price McGuffey situated high above the stage in his own cubbyhole, the dancers meandered onto a stage occupied only by five red folding chairs in a neat row.  The score ranged from clicks to drum rolls to bossa nova rhythms.

Their eyes glued to the clock, they seemed to be hypnotized, barely acknowledging each other.  Clockwatching was a running theme of …it’s time…, punctuating its many short sections which ranged from mysterious rituals to childlike playtime.

After gathering they did simple warm-up exercises, paused (frequent pauses being another “theme” of the work) and broke out into tremors, wiggles and twisty body movements.  One or more of the five would ask “Is it time?” which also became a returning idea. 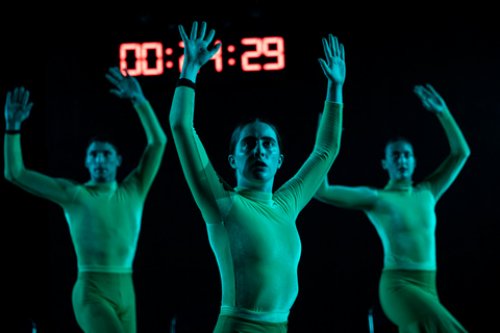 These repeated bits gave …it’s time… a much-needed feeling of harmony, when the truth is that it was a compilation of disparate dance skits, each impeccably and clearly presented by performers totally in synch with Freeman.

They sat in the chairs and squirmed about sleepily or held their right arms up at a stiff angle.  Or they stood on the chairs, sometimes sharing one, bellies touching.

They encircled one or another with vaguely sinister purpose.  They played a frantic, slightly evil, game of musical chairs—all the while staring at the clock which showed the real time unfolding of the work.

Often they spoke as when they shouted with increasing relish at the loser of the musical chairs game, “Too late!” They pulled and pushed at each other doing lifts and falls, even using one of the chairs as a weapon.  One by one they sprang about the stage, kicking their legs high.  Or they simply sat and drummed their fingers on the sides of the chairs, all the while staring intently at the clock.

At one point they all donned long black hooded robes giving them the look of a witch’s coven, or a panel of judges. 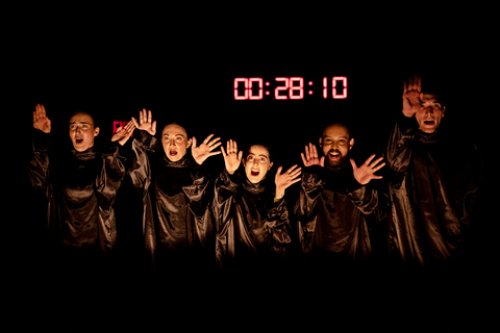 Too episodic to add up to a cogent, unified statement, …it’s time… nevertheless was constantly involving, its title remaining a bit of a misdirection.

The five dancers—Maddison Burg, Mia DeWeese, Matt Luck, Christopher Ralph and Madeline Wright—each contributed their distinct physiques and presences to Freeman’s work, preventing it from splitting apart into its different parts.  Somehow the dancers’ presence made the work gel.

Philip Treviño’s lighting was responsive not only to the episodic structure, but also to the music.  His moving strip of light was eerie and his sudden switches from bland to colorful added drama to the weaker sections.