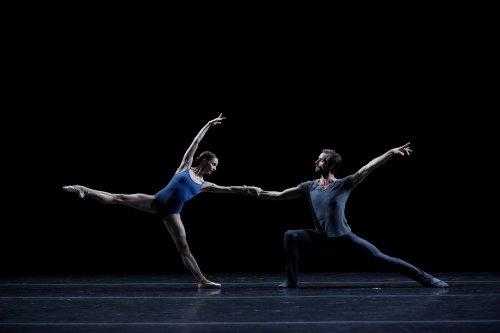 Maria Kochetkova and Sebastian Kloborg in William Forsythe’s “Bach Duet” (from “New Suite”), part of Maria Kochetkova: “Catch Her If You Can” at The Joyce Theater (Photo credit: Rachel Neville Photography)

Russian-born Maria Kochetkova, the petite ballerina who spent the major portion of her career with the San Francisco Ballet, has turned herself into a small-scale Diaghilev.  Her Maria Kochetkova: Catch Her If You Can at the Joyce Theater is a gathering of five brilliant dancers (including herself) dancing the works of seven contemporary choreographers.

Even with her name on the program, Catch Her If You Can was pleasantly un-self-aggrandizing, feeling more like a—very expensive—jam session.

So ego-free was the evening that Ms. Kochetkova clearly felt no reluctance to pair herself with Drew Jacoby in Jacoby’s duet “Rachel, Nevada” choreographed to an eerie score by Sam Spiegel. 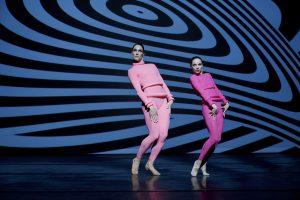 Drew Jacoby and Maria Kochetkova in Jacoby’s “Rachel, Nevada,” part of Maria Kochetkova: “Catch Her If You Can” at The Joyce Theater (Photo credit: Rachel Neville Photography)

Ms. Jacoby is more than a foot taller than Ms. K so this work took on a Jacoby/Mini-Jacoby ambiance, exaggerated by the choreography in which Ms. K tiptoed behind Ms. J, mirroring her simple movements.  They meandered about the stage dressed in Anja Mlakar’s costumes—pink for Ms. J and pale orange for Ms. K, both featuring thick piping around the hips and bosoms.  Their comical, vaguely science fiction journey was carried out in front of a constantly morphing black and white video of circular shapes oozing across the screen.  This rather old-fashioned imagery was created by TOYKYO.  Stacey Boggs’ lighting contended well with the goofy, ever-changing backdrop.

The first four works, one duet and three solos, were cut from the same cloth:  moody, gesture heavy and emotionally uninvolving.  The first, “Bach Duet (from New Suite)” by the eminent expatrate William Forsythe was performed by Ms. Kochetkova and the imposing Dane, Sebastian Kloborg.  Dressed in Yumiko Takeshima’s dark practice outfits the two seemed disconnected from the solo violin work and from each other.  They spoke to each other with jutting arms and tense hands as their bodies performed tense ballet steps highlighted by Forsythe’s own, dreary lighting design—typical of all his ballets. 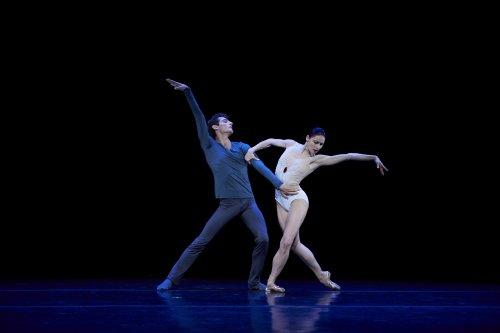 The most fulfilling work was David Dawson’s “At the End of the Day” performed by Mr. Kloborg and Ms. Kochetkova to Szymon Brzòska’s “Migrations.”  Chloé’s simple, dark costumes gave the two dancers the freedom to turn Dawson’s images of soft lifts and yearning upper body movements into a portrait of love found and lost.  The final image of Ms. Kochetkova bending backwards in a lunge was quite moving.

Two of the works could be called controversial for different reasons.  Although one was titled “White Swan Pas de Deux (from Swan Lake)” it had virtually nothing to do with the original.  Danced to the famous Tchaikovsky music by the lovely, world-class ballerina Sofiane Sylve and the handsome, lithe Carlo Di Lanno—both clearly capable of dancing the original Ivanov steps—this version, by Dawson, used a disconnected series of classical ballet steps which occasionally alluded to the original.  Ms. Takeshima clad Ms. Sylve in a delicately embossed white leotard and Mr. Di Lanno in incongruously plain dancewear.  Bert Dalhuysen’s glum lighting gave the duet some emotional weight.

The other work that will certainly stimulate conversations on ballet websites was the world premiere, “Masha Machine” choreographed (if one can use that word to describe this “duet”) by the gimmicky French choreographer Jérôme Bel.  The dance content, a simple solo for Ms. Kochetkova, little more than a choreographed curtain call, came after the main part of “Masha Machine,” a projection of a lengthy text sharing between Ms. Kochetkova and Mr. Bel as they gradually decided to collude on this dance work.  What was fascinating about this modern-age colloquy was how it revealed the inner workings of both artists’ minds as they contemplated their futures, aired their fears and opened themselves emotionally to each other.