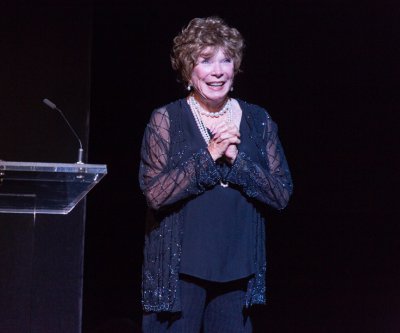 Ann Marie DeAngelo, the longtime producer and director of the Career Transition for Dancers: 30th Anniversary Pearl Jubilee, has outdone herself this year with a smooth and satisfying program, balancing entertaining dance numbers with just the right amount of speechifying.   Adding appearances by Broadway and TV star Bebe Neuwirth, prima ballerina Cynthia Gregory and Hollywood royalty, Catherine Zeta-Jones, Michael Douglas and (Rolex honoree) Shirley MacLaine to the mix, resulted in a gala that out-gala-ed the previous ones.

After wittily using a bagpiper to make the No Cell Phone plea, a mini-history of dance was intoned, in a patriotic rap style.  Thereafter, one short dance flowed into the next beginning with Douglas Martin’s “Hoedown,” a pleasant, “Rodeo”-lite excerpt danced by the American Repertory Ballet, followed by two overlapping duets, one balletic (Karen Moscato and Mattia Pallozzi also of the ARB) and the other, barefoot modern (Mary LaCroix and Barry Lohr of the Las Vegas Contemporary Dance Theatre), choreographed with simplicity and style by the fearless leader of the event, Ms. DeAngelo.

Cynthia Gregory, an emeritus board member of CTFD handed out awards to Andrew Faas—Faas Foundation, Irene & Fred Shen, and Misty Widelitz, all caught dramatically—and uncomfortably!—in pools of light.   Then it was on with more terpsichorean treats. 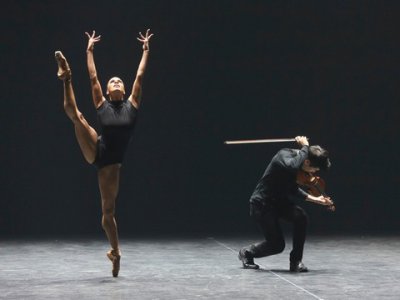 The ballerina of the moment, Misty Copeland, newly-minted principal dancer of American Ballet Theatre, danced fellow principal dancer Marcelo Gomes’ “Paganini,” a delightful and surprising non-verbal conversation between Ms. Copeland (in a chicly cut black leotard) and the good-natured violinist Charles Yang.   As Mr. Yang smartly played a Paganini’s Caprice, Mr. Gomes had Ms. Copeland, alternately cool, capricious, flirtatious and downright sexy, move around Mr. Yang.  At one point, acting disappointed in the music, she marched off toward the wings, only to bounce back on to end with a fabulous high kick on the last note.  Blackout!

Not so exciting, but danced with panache, was Gene Kelly’s “Ballin’ the Jack” staged by former New York City Ballet star Damian Woetzel for current NYCB principal and star of An American in Paris, Robert Fairchild.  Mr. Fairchild was charming in this insubstantial piece of fluff, which included the knees together/side-to-side bit mentioned in the lyrics of the song.  Mr. Fairchild knew how to sell this dance. 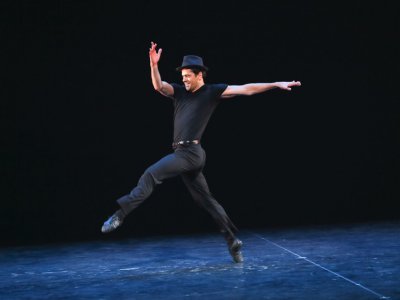 A highlight of the program was the New York Song & Dance Company’s thrillingly original take on Cole Porter’s “I’ve Got You under My Skin” in which choreographer Noah Racey, first with Con O’Shea Creal, then with three other dancers performed competitive tap routines until Frances Nielah Bradley entered singing an unaccompanied version of the famous Porter song.  As she sang, the dancers tapped, snapped their fingers, patted various party parts, all sensually and slyly providing backup to the very talented singer who wound up tapping up a storm herself.  The number built and built in sensuality and wit—a true study in sophisticated dance making.

From Parson’s Dance, Elena D’Amario performed Mr. Parson’s signature work, “Caught,” a gimmicky but effective dance that uses strobe lighting to make the dancer appear as if she were floating across the stage.  Although Robert Fripp’s electronic music sounded harsh after Cole Porter, its buzzing was perfect for this virtuoso solo.

Bebe Neuwirth was the ageless leader of “All That Jazz” (Kander/Ebb) from the current Broadway revival of Chicago, dancing Ann Reinking’s steps in the style of Bob Fosse.  A large group of dancers from the show, in sexy black see-through costumes, jiggled, glided and undulated as Ms. Neuwirth sang the now classic song. 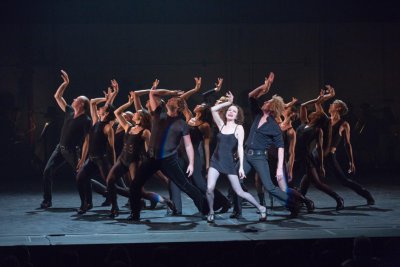 Bebe Neuwirth and ensemble in “All That Jazz” from “Chicago” (Photo credit: Richard Termine)

Ms. DeAngelo guided and rehearsed Mary LaCroix and Barry Lohr, in addition to Karen Moscato and Mattia Pallozzi, in some of her lyrical choreography to music by Lloyd G. Miller who happens to be Cynthia Gregory’s son.

The exciting news that CTFD was combining forces with the Actors’ Fund was announced by Ms. Neuwirth (in a wonderful red and white gown, looking cool and collected after her efforts just minutes before) and leading man extraordinaire Brian Stokes Mitchell.

Eliot Feld’s Ballet Tech’s Kids Dance members—all youngsters—performed his “Kydzny” to catchy, bouncy, Klezmer/Greek sounding music by the Raya Brass Band.  Mr. Feld put these wonderful kids through their paces, moving them alternately en masse and in smaller, crisscrossing patterns, dressed in Michael Krass’ colorful unitards and headgear.  If there is one word to describe these delightful kids, it would be exuberant.  Okay, one more word:  disciplined.  A tribute to Mr. Feld and his school.

The main event, the presenting of the Rolex Dance Award to Shirley MacLaine was exciting.  Michael Douglas and Catherine Zeta-Jones introduced Ms. MacLaine whose witty acceptance speech made fun of her famous belief in past lives:  “This is the best night I’ve had in 600,000 years!” she exclaimed.

Her words were a moving tribute to the fragile, extraordinary lives of dancers.  She had the audience in the palm of her hand proving that star quality is a powerful force.

A final Latino style ballroom duet, performed with all the appropriate wiggles and fiery glances by Christopher Gerges and Alena Sentyabreva ended the show.

As the elegantly attired audience headed off to their gala dinner, they all left knowing they had witnessed a great show.  The lobby buzz was tellingly loud and positive.