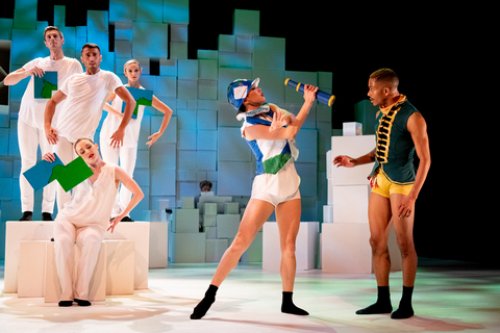 Antoine de Saint-Exupéry’s The Little Prince (1943) has been studied, analyzed, and staged as any number of plays, ballets, musicals and an unsuccessful film.  So, it was with great interest that I went to BalletX’s The Little Prince choreographed by fast-rising choreographer Anabelle Lopez Ochoa to a brilliant score composed and miraculously played by Peter Salem.

BalletX, directed by the forward looking Christine Cox, is a modern ballet troupe stationed 90 minutes south of New York in Philadelphia.  The troupe combines classical ballet with modern dance and, in the case of the Little Prince, mime, singing, speaking and twisty modern dance.

Lopez Ochoa’s interpretation follows Saint-Exupéry’s story pretty closely: during World War II, a Pilot (Zachary Kapeluck, straightforward and a calm center) crashes his airplane in a desert.  The crash is imaginatively portrayed by dancers holding pieces of a yellow plane. 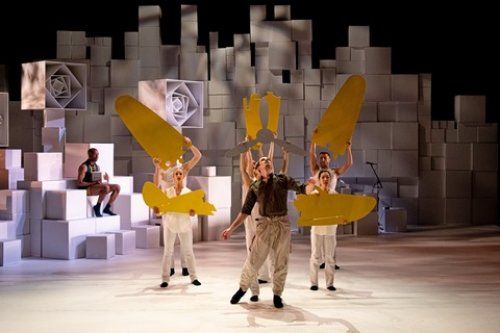 Zachary Kapeluck (foreground) as The Pilot with BalletX dancers in a scene from Annabelle Lopez Ochoa’s “The Little Prince” (Photo credit: Vikki Sloviter)

He meets a mysterious boy, the Little Prince (an agile, buoyant and boyish Roderick Phifer) who takes him on a journey through the universe, a journey that is meant to be mythical, spiritual and illuminating.

A Snake representing fate and death (a sinuous, perfectly cast Stanley Glover, all in black, donning a snazzy bowler—gorgeous, colorful and imaginative costumes by Danielle Truss) who shadows the two as they meet a series of characters:  the Little Prince’s beloved Rose (a lovely Francesca Forcella who wears her petals with grace); a lonely King (Blake Krapels, communicating the character’s plight clearly, helped by Lopez Ochoa’s simple mime); a Narcissist (Skyler Lubin, wittily begging for attention); the Drunk who drinks to forget his drunkenness (Richard Villaverde, juggling his bottles with skill); the Businessman who counts and records the stars that hover about his head without ever really seeing them (Chloe Perkes, hunched over the ledgers with great concentration); a very busy Lamplighter (Andrea Yorita, who flies about on point); and the silly Geographer who only knows her maps (Caili Quan, wittily tossing about her maps).  Finally, a Fox (Richard Villaverde, showing his versatility) teaches the Prince a mighty life lesson.

The ending is the only weak part in Lopez Ochoa’s staging.  The costumes and set overwhelm what should have been a moving moment. 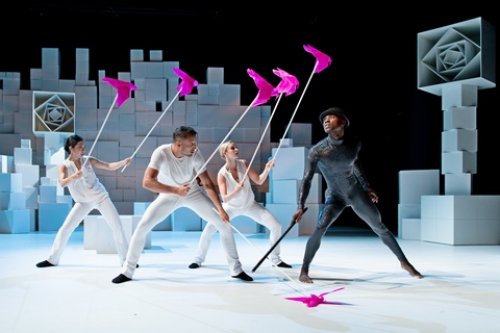 This time The Little Prince is clever and well-crafted, but ultimately slight, despite its first rate production values.  Picture perfect and full of color it should appeal to children and adults, although the philosophical message might be lost on the young ones.

Matt Saunders’ abstract piles of white boxes were ingeniously moved about to create different scenes.  From the Little Prince’s military jacket to the Rose’s pink costume, Ms. Truss showed great skill as did Michael Korsch in his wonderful lighting designs.

This is quite an impressive production for a small dance troupe and will probably be a touring staple for BalletX, and quite rightly so.