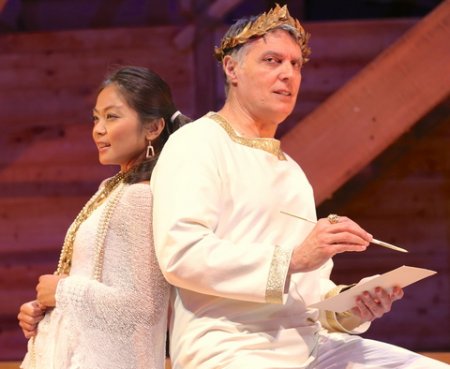 When the Gingold Theatrical Group’s revival of Bernard Shaw’s epic Caesar and Cleopatra begins, the characters are wearing white contemporary clothes and sitting on what looks like an excavation site which might give one pause. Like David Staller’s revival of Heartbreak House last year, his Caesar and Cleopatra tries to give this 1898 play a more contemporary relevance, but unlike Heartbreak House which pointlessly updated that play to W.W. II rather than the usual W.W. I setting, this modern approach works extremely well and proves to be quite charming.

Narrated by Cleopatra’s chief nurse and head of her household Ftatateeta (an invention of Shaw), we are swiftly carried back to Roman times. With a cast led by Tony Award nominee Robert Cuccioli as Caesar, Teresa Avia Lim as Cleopatra and Tony Award nominee Brenda Braxton as Ftatateeta, the evening is lightweight Shaw but very entertaining with contemporary relevance. 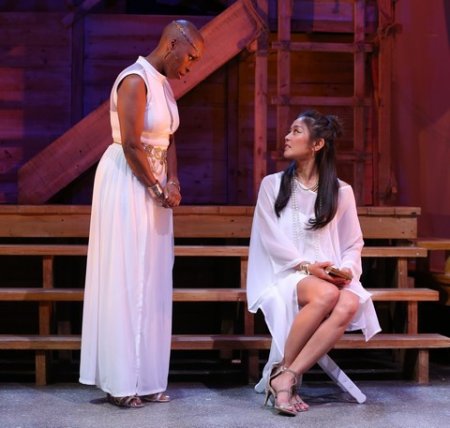 Brenda Braxton as Ftatateeta and Teresa Avia Lim as Cleopatra in a scene from Shaw’s “Caesar and Cleopatra” presented by the Gingold Theatrical Group (Photo credit: Carol Rosegg)

Staller who has both adapted and directed the play has come up with a new version which reduces the cast from 15 speaking roles (plus extras) to eight played by seven actors and adds the narrator which was proposed by Shaw for both for the 1945 film version and a newly conceived London production shortly before his death in 1950. Begun on an excavation site in modern Egypt, Ftatateeta takes us back to her time when Caesar had tentatively conquered Egypt with his small Roman army and the sixteen-year-old Cleopatra and her 21-year-old brother Ptolemy were wrangling for control of the throne.

While Tracy Christensen’s costumes begin in all white, each succeeding scene adds more gold to the fabrics until by the end we see our imagined conception of royal Rome and Egypt. Brian Prather’s all-wood setting is backed by sheer white curtains which are used as the background for designer Jamie Roderick’s play of various colored lights, suggesting various moods, locales and times of day for this five act play which now runs no longer than two hours including intermission. 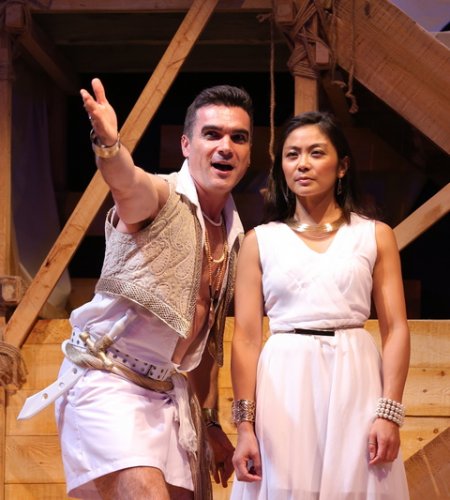 Dan Domingues as Apollodorus and Teresa Avia Lim and Cleopatra in a scene from Shaw’s “Caesar and Cleopatra” presented by the Gingold Theatrical Group (Photo credit: Carol Rosegg)

The play follows Caesar’s first and accidental meeting with Cleopatra at the small Sphinx in Alexandria near the royal palace up until his departure to Rome more than six months later. The play elaborates the mentor-student relationship between Caesar and Cleopatra: he teaches her the art of leadership as she grows from an adolescent to a fully formed adult ready to rule the country by herself. While the Henry Higgins-Eliza Doolittle relationship in Pygmalion creates all sorts of problems for feminists today (attempted to be dealt with the in the recent Lincoln Center revival of My Fair Lady), this play addresses questions of women’s rights, colonization, gender roles, satire of the British people and their customs, among others, without offending modern sensibilities.

Robert Cuccioli is a laidback, wry, world-weary Caesar who perpetually seems to have a smile hovering around his lips. He seems to relish Shaw’s wise advice to Cleopatra such as “Standing and speaking like a queen isn’t enough. You must think like one. You want to be taken seriously as a Queen, you must convince the world that you are a queen.” Described by Ftatateeta as “a kitten that began to grow into the cat,” Teresa Avia Lim beautifully delineates the stages in Cleopatra’s growth turning from a child into a seasoned leader right before our eyes, more mature in each successive scene. As the head of her household and a good deal older, Brenda Braxton brings a brash authority and a quick and witty tongue to her role as the guardian of the child queen. 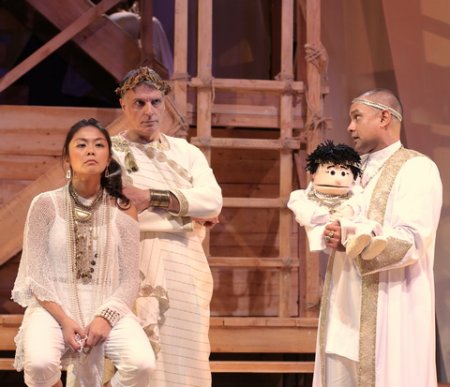 As the young Sicilian carpet merchant who champions the queen, Dan Domingues has all the swashbuckling style of the born mercenary and gets a great many laughs for his braggadocio. Not the burly middle-aged officer of Shaw’s original play, Jeff Applegate’s Rufio is a much younger version of the loyal soldier always on the lookout for threats to Caesar. Jonathan Hadley is amusing as Caesar’s British secretary, serious and stuffy, always ready to be shocked by insults to his propriety. Rajesh Bose has the triple job of playing the shrewd guardian to the boy King Ptolemy as well as the king as a puppet and later the Sentinel who comes up against the wrath of both Ftatateeta and Apollodorus.

The rarely produced Caesar and Cleopatra (partly due to the size of the original cast and epic proportions of Shaw’s requirements) demonstrates that it has a great deal to say to modern times as it is more attuned to our own era than most plays from the turn of the last century. It also is an acting tour de force in comic mode for its lead characters. Under the astute direction of the Gingold Theatrical Group’s David Staller, Cuccioli, Lim, Braxton and company offer a charming and historic way to spend an evening with a witty and unfamiliar Shaw comedy. Bernard Shaw was ahead of his times on most issues and this production offers the evidence. Once part of the argument as to whether Shaw was better than Shakespeare (cf. Antony and Cleopatra), it is now possible to evaluate the play on its own merits.

For more information on the Gingold Theatrical Group, visit http://www.gingoldgroup.org