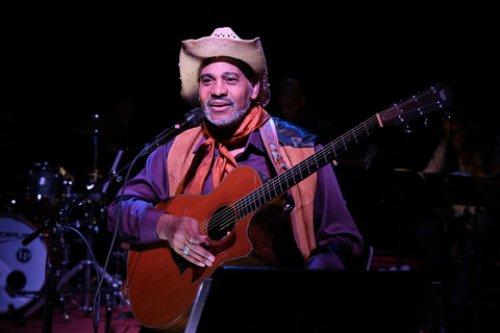 Allan Harris in a scene from “Cross That River: A Tale of the Black West” (Photo credit: Carol Rosegg)

In the Old West, one out of every four cowboys was black, a history which has been mostly omitted from America’s popular culture. Unfortunately, in our Hollywood-shaped understanding, a cowboy looks like John Wayne instead of Nat Love, even though Love, an ex-slave who made the soul-resuscitating journey from plantation to ranch, was the real deal.

It seems very likely that Love’s story was one of the many that inspired the creators of Cross That River: A Tale of the Black West, a heartfelt musical that tries to break through our collective amnesia by mixing the familiar with the not so familiar. Composed by Allan Harris, a noted jazz musician, the score starts off with an overture that’s pure downtown cool, but, after the last funky rhythm subsides, Harris himself is on stage in a flannel-and-denim outfit as dusty as the range itself, donning a Stetson, and twanging a guitar. Incorporating country, jazz, blues, and gospel, what makes Cross That River so instantly captivating is that from the get-go it looks and sounds like all of America, which is a wonderful place to begin.

Carolyn Leonhart, Jeffery Lewis, Maya Azucenea and Allan Harris in a scene from “Cross That River: A Tale of the Black West” (Photo credit: Carol Rosegg)

Serving as both narrator and protagonist, Harris portrays Blue, a runaway slave who crossed the Sabine River from Louisiana to Texas in search of his elusive freedom. To tell us everything that came before and after this momentous event, Harris is joined by three other impressive vocalists/performers in a concert-style presentation that has all the charm and verve of an old radio play.

As the young Blue, Jeffery Lewis recounts the pivotal sight of a free black man leading a wagon train West, which “set his mind on fire.” But, while that might have been Blue’s inspiration to leave the plantation, the impetus is a love affair, obviously clandestine, between him and the master’s daughter, Courtney (Carolyn Leonhart). Once the master sniffs it out, Courtney and Blue’s aunt (Maya Azucena) realize there’s no choice but to saddle Blue up and send him off into the night.

Playing all the non-Blue roles, Leonhart and Azucena carry a lot of the show’s historical and emotional weight, as the book by Allan and Pat Harris, fans out to encompass other forgotten lives. Of these, Blue’s aunt, known as Mama Lila because tragedy forced her to raise him, is the most fleshed out and compelling, as she desperately tries to save Blue from the pain she has endured. Her hopes and sorrows culminate in the gospel-infused “I Must Believe,” which is the score’s best song and, thanks to Azucena’s four-octave range, absolutely levels the audience. It’s not really a misstep, but, still, director Regge Life may want to consider inserting an intermission right after Azucena collapses into her chair, so she, and the audience, can recover. 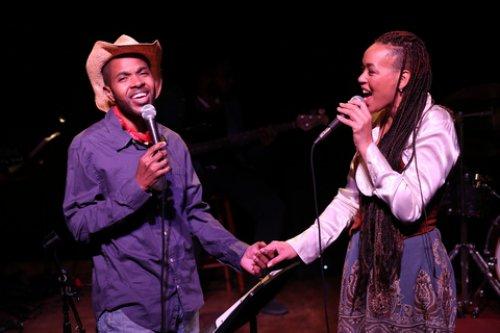 Jeffery Lewis and Maya Azucena in a scene from “Cross That River: A Tale of the Black West” (Photo credit: Carol Rosegg)

Otherwise, Life and his creative team are completely on point. The lighting and sound design, by Michael Giannitti and Norman Riley respectively, gives our imaginations just enough to hang onto in the minimally staged production, and the tangled, dead branches that set designer Anne Patterson hangs over the actors nicely evokes the existential dread that’s also hanging over their characters.

And, then, there’s the band! Assembled in a single row behind the actors, its five members are talented enough to put more than a few Broadway orchestras to shame. Harris’ score expects a lot from them, even an occasional bit of hokiness, and they mange to pull it all off beautifully. It also appears that they’re having as good a time as the audience, which is another reason to love both them and the show.