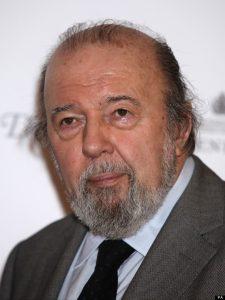 Stephen Unwin was Artistic Director of the Rose Theatre, Kingston (2008-15)

The scale of Peter Hall’s achievements is almost impossible to quantify. This was the man who at the age of 25 directed the English language premiere of Waiting for Godot, at 31 founded the Royal Shakespeare Company, in his mid forties became the first Director of the National Theatre on the South Bank, while finding time to run Glyndebourne, the Royal Opera House, and direct television, film and dozens of productions in the West End and on Broadway.

In his later years he published his fascinating theatre diaries, wrote several terrific books about the theatre, ran his own production company (the Peter Hall Company), was the creative inspiration for the Rose Theatre in Kingston and directed a series of remarkable seasons at the Theatre Royal Bath. He worked with all the great actors of his time, commissioned and produced the finest playwrights, and inspired, encouraged and employed hundreds of directors and designers, lighting and sound designers. There’s never been anybody like him in the British theatre, certainly since Harley Granville Barker, or perhaps even Garrick. It’s an astounding set of achievements.

I first met Peter when I was a raw undergraduate. He’d summoned me to his office at the National Theatre because he’d heard through the grapevine that I was doing ‘good work’ and wanted to meet me. I remember him taking the time to show me the masks that Jocelyn Herbert had created for his new production of The Oresteia. I was struck by his enthusiasm, his energy, and the interest he took in this ambitious young whippersnapper: he was so obviously generous, open-minded and in love with the theatre. Reading his Diaries I realise that I was probably light relief from his struggles with the unions or the Arts Council, and he was off to have lunch with Ralph Richardson or Tom Stoppard. But such was the appetite of the man—unstoppable, infectious and quite remarkable—and it had a big impact on my subsequent career.

I’d been brought up on his productions and came to admire him for so many things, but above all his belief in the text itself. This was a man who loved words, the exact turn of the phrase, its cadence and where the stress falls, whether in Shakespeare or Pinter, Beckett or Stoppard, and his commitment to the nuance of language lay at the heart of everything he did. He used to tell a story about working with Dustin Hoffman on The Merchant of Venice and being delighted when Dustin turned up to rehearsal one morning declaring that ‘you can’t improvise this shit’. For Peter, the detail of the language was everything. A young director mocked him as an ‘iambic fundamentalist’: Peter was thrilled. Words, words, words were everything.

But although Peter had a brilliant and genuinely scholarly understanding of the great writers, and his roots were in FR Leavis, Dadie Rylands and Cambridge University, his work in the theatre was never drily academic, and he had a showman’s instinct and loved the power, commitment and animal energy that the great actors bring. He wasn’t scared of big personalities, big emotions, and we all devoured his stories about Larry Olivier, John Gielgud and Edith Evans, and his two favourites, Ralph Richardson and Peggy Ashcroft, or Noel Coward, Harold Pinter and Samuel Beckett.

I kept in touch with Peter over the years and was thrilled—and terrified—when he asked me to take over from him as Artistic Director of the new Rose Theatre in Kingston. There were a lot of challenges about the Rose, but we worked together happily for six years, with him as Director Emeritus and myself as his boss (!), which is when I got to know him better. And there I saw a man who, in his high 70s, still loved his chosen profession, who still cared about the great ideal of theatre of the highest quality which was accessible and open to all. I’d been warned about his Machiavellian streak, but all I saw was passion, laughter and an almost childlike enthusiasm.

The Rose had had a difficult birth, and we were struggling to pay the bills, so one day at his favourite Italian restaurant in Chelsea I told Peter that we needed to find a play for his great friend, the finest actress of our time, Judi Dench. He looked at me mournfully (as he sometimes could) and said, ‘yes, but she’s done everything’. I suggested impishly that it would be fascinating to have a Titania in A Midsummer Night’s Dream modelled on Queen Elizabeth I. Within hours Judi had agreed and the Rose had its most successful production ever (which saved our skins). And it was that combination of artistic intrigue, get-up-and-go energy and commercial nous that made Peter such an astonishing figure, and the undoubted architect of the entire edifice of the modern British theatre.

But no account of Peter’s life can be complete without paying tribute to his his family. He’d famously had a complicated private life and been married several times (with Nicki Frei, he told me, he’d ‘finally got it right’); but what I observed was a remarkable pater familias who adored his six children and nine grandchildren, and they in turn loved and respected him. At first nights an entire row would be set aside for them. Peter expected to be paid handsomely for his work. But this was a man who loved life and knew how to live. He was sensitive, inquisitive and astonishingly charismatic.

The theatre keeps changing and one generation’s firebrand is the next generation’s dead wood. And, of course, much of what Peter stood for and championed has been challenged and rejected in recent times. This is entirely natural and I think Peter in his old age understood that. But it’s impossible to overstate just what an extraordinary contribution Peter made, not just to the world of the theatre, but to culture at large.
We shall not see his like again.

Stephen Unwin was Artistic Director of the Rose Theatre, Kingston (2008-15)

Republished with permission from The Independent, ES Magazine & London Evening Standard where it was originally published on September 14