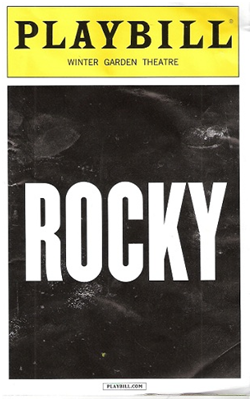 Rocky was, for me, the real “sleeper” of the season–the show I least expected to enjoy, whose very real strengths surprised me and quickly won me over. I confess, I was skeptical when I first heard the news that producers intended to develop a Broadway musical based on the Rocky films. A boxing musical? I just couldn’t see it. Nor could I imagine there’d be an audience for this on Broadway. Nor could I imagine that I–who’s never seen a boxing match in my life or had any interest in doing so–would enjoy such a Broadway show. But I was wrong. Thomas Meehan and Sylvester Stallone, who wrote the script (based on Stallone’s famed MGM/United Artists motion picture), have done a terrific job of good old-fashioned storytelling, making us care about the fate of an underdog, a down-on-his-luck boxer. And director Alex Timbers has staged this with enormous flair. The last 20 minutes or so of the show are devoted to a boxing match–and by the that point, I had come to care so much about the hero of the show, I was hanging on every word, and every move, and hoping he would win. It’s a very well-constructed book, and the staging–from start to finish–is first-rate. 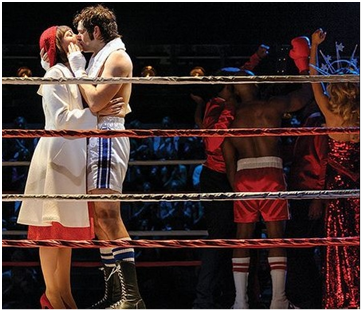 My chief reservation? The score, by composer Stephen Flaherty and lyricist Lynn Ahrens, struck me as serviceable rather than memorable. And that surprised me, because Flaherty & Ahrens are great favorites of mine. There’s much to enjoy in their scores for such shows as My Favorite Year, Once on this Island, and Seussical. And there’s no musical of the last 25 years that I enjoy more–or whose score I admire more–than their show Ragtime. I can’t say that any of the songs in this show has grabbed hold of me the way many songs of theirs from previous shows has. But, to my surprise, I still had a great time watching Rocky. It worked for me as entertainment.