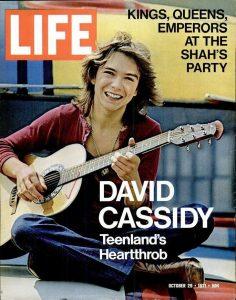 I’m sorry to note the passing of David Cassidy. And I want to share a few  remembrances of him–as a performer and as a person.

He was capable of conveying magic in his concerts–a “Peter Pan” figure, eternally young. On stage, he managed to seem–for decades–to be a kind of happy-go-lucky teenager.  And he never got tired of having fans–whether gals or guys–tell him he’d been their first crush.

He was also capable of excellent work in musical-theater.  He was terrific, for example, in “Blood Brothers,” which he did both on Broadway and on tour, surprising many with his strong, legit voice.  He did “Joseph and the Amazing Technicolor Dreamcoat” on Broadway, too.  And in younger days got to sing duets with the wonderful Dorothy Loudon in a very short-lived Broadway musical, “The Fig Leaves are Falling.”  And he did also shows on the London stage.   I wish he’d done more theater.  He was very good at it–better than he realized. 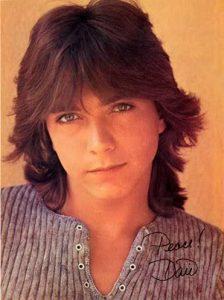 Offstage, there was enormous sadness in David Cassidy, a lot of insecurity, a lot of loneliness.

When he was really depressed, really in a dark mood, you really felt it.  It was hard for me to be around him when he got really down on himself.   There didn’t seem to be anything you could do for him at such times.  And he had a marked tendency towards depression.

I was delighted when David asked me to collaborate with him on his memoir, “C’Mon Get Happy” (Warner Books); he told me I could ask him anything; there’d be no secrets between us. He would tell me everything, he said, and we could decide later whether to include it in the book or not. I liked his openness. 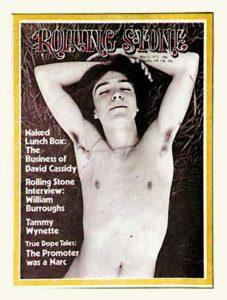 And I liked him, and told him so. He  responded: “You may be like me now. When you get to know me better, you probably won’t like me so much. And you’ll probably turn on me; everyone does.”

He felt that many had turned on him over the years–starting with a famous father (actor Jack Cassidy) who’d had little time for David as a boy and left David nothing in his will.  (David bought his father’s pocket watch at an estate sale, just to have something of his.)  And he noted bitterly that most of the Hollywood movers-and-shakers who treated him like a golden boy when he was on top ignored him when his popularity faded. 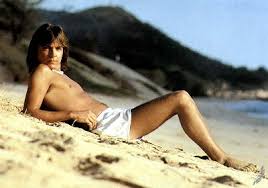 At his peak in early 1970s, David Cassidy was the highest paid, most popular male solo concert artist in the world. He received 25,000 fan letters per week.  And he became a virtual prisoner in his own home.  He could not go anywhere without being mobbed. (Once, when he broke box-office records at Atlantic City’s famed Steel Pier, he donned drag–a woman’s dress and wig–just so he could  pass through a crowd unnoticed.)  He had a hard time coping with the fame, and all of the craziness connected with it. 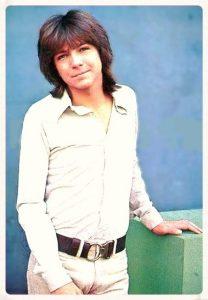 David Cassidy on the Partridge family

It was exhilarating for him to perform for fans who screamed non-stop through his triumphant Madison Square Garden concert; it was frightening to him that hysterical fans wrecked limousines parked in front of the Garden. (Security got him out of the concert by wrapping him in a blanket and placing him in the trunk of a Toyota; they drove him to a cheap motel in Queens.)

He was horrified that hundreds of his fans were injured at one  concert in England when everyone rushed towards the stage to be closer to him–and one fan was actually crushed to death in the frenzy. He isolated himself in his home after that, drinking and drugging to excess, just numbing himself.  His parents made vain attempts to intervene.  (You could not argue with David, if he wanted to do something.) 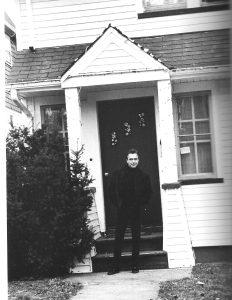 He had innumerable sexual encounters with fans (which he could describe at great length  in vivid detail), but they did not assuage his basic loneliness, he told me.  They often were not emotionally satisfying, he said.  He felt that many of his fans imagined he was the character he played on TV (“Keith Partridge” of “The Partridge Family”)–and he knew that character was nothing like him.  (He eventually married three times; his marriages all ended in divorce.)

On TV and on stage, David Cassidy sang light, cheery bubblegum pop songs. Offstage, he preferred the likes of Jimi Hendrix, Eric Clapton, Jeff Beck, B. B. King, John Mayall, Albert King, the Beatles, Marvin Gaye, the Beach Boys, Albert King. And could also appreciate the songs of the Gershwins and the big-band music of Artie Shaw.

David Cassidy made and lost millions.  He eventually wound up declaring bankruptcy. He would tell me, in that endearingly vulnerable way he had–he always reminded me of a wounded sparrow: “It doesn’t matter how much money I make; I’ll just lose it anyway.”

He was not materialistic. He didn’t have many possessions or mementos from the years when he was on top.  And he wasn’t really interested in dwelling on 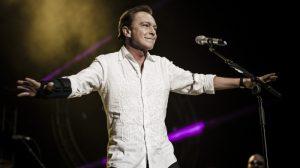 He told me his family had lived simply when he was a boy; they could not afford a clothes dryer; the clothesline in the backyard worked just fine, he said. One day, he had me drive him to his boyhood home–23 Elm Street, West Orange, NJ. (I took the black-and-white photo of him revisiting his boyhood home.)  It made him happy, he said, that the house hadn’t changed. And that the clothesline was still out back.

He wanted to see the local store (“Tory Corners”) where his grandfather had bought him a Slinky and a Mr. Machine–popular toys of the time–when he was nine or ten.  And the woods where he used to play.  And the church where he sang in the choir (“before Hollywood wrecked me,” he said).

Driving  back to New York City on Route 3, he showed me the exact spot where his father had told him, when he was a kid,  that his father and mother were divorced.  The wounds still seemed fresh as he spoke  of those days.  He carried his hurts with him.  He did not, as a rule, let them show in interviews he did on radio and TV; there he used his best acting skills (sometimes saying words I’d helped craft for him), suggesting he was happy with his life and optimistic about the future.  Offstage though, he was frank in saying that very little gave him much satisfaction, that life was a real struggle.

If I asked him to share a happy memory, it was apt to be from before he ever tasted fame.  Maybe hiking with his best friend, in his teens–just getting back to nature, skinny-dipping.  Simple pleasures.

I once watched him address kids at a high school–trying to tell them of the dangers of drugs and alcohol (which he felt he knew about all too well).  But the kids weren’t interested in that.  They asked  him questions about his rise to fame, wanting him to tell them the secrets to getting rich and famous and happy.  He tried to tell them that being a celebrity  wasn’t all it was cracked up to be, that drugs and alcohol had only  brought him great sadness.  Afterwards, he told me, “They didn’t want to hear that; they didn’t want to listen.  I wouldn’t have listened at their age, either.  Kids will always have stars in their eyes.”

I liked David.  I even made him a character in one of my plays. A picture of David and me has graced  my wall for about a quarter-century.  He looks so happy in that particular shot–it was taken on a good day.  I’m very sorry he’s gone.

David’s last words, according to a tweet from his daughter, actress Katie Cassidy, were “So much wasted time….” 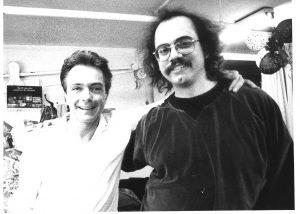