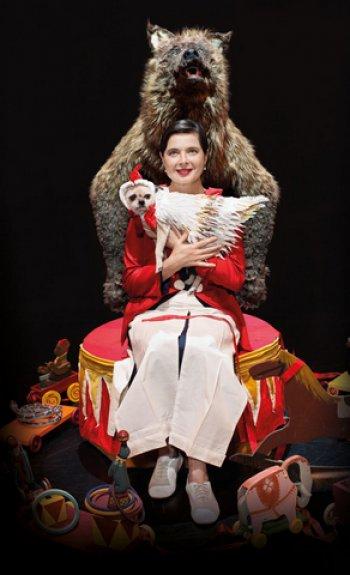 “Welcome to the smallest circus in the world!” exclaims the beaming Isabella Rossellini at the start of her self-written whimsical performance piece Link Link Circus. “This show is a theatrical conference on the subject of Can animals think, feel, and have emotions?” explains Ms. Rossellini about the aim of this enchanting exploration containing scientific tidbits where she is joined by her dog and a puppeteer for a delightful 80 minutes.

Dressed in costume designer Fanny Karst’s fabulous modernistic take on a ringmaster’s uniform with flowing red tails, Rossellini is radiant as she holds forth in her cheery distinctive accented voice. We learn of her lifelong fascination with animals that began with childhood pets and continues with training service dogs on her Long Island chicken farm. She is completing a master’s degree in Animal Behavior and Conservation at Hunter College and has received a PhD Honoris Causa from the Science Faculty at University of Quebec at Montreal.

Darcy, a charismatic small mixed-breed dog rescued from a shelter in 2018 portrays “Pater Pan.” She is a terrific co-star as she appears cleverly costumed as a bee, a chicken, an elephant and other animals or just running around as herself encouraged by treats. Animal trainer extraordinaire Bill Berloni guided Darcy’s magnificent performance.

Wearing a striking black beekeeper’s suit is the puppeteer Andy Byers. Manipulating a series of animal representations, Byers pops in and out of the show often partnered with Darcy. Byers’ jovial presence and pheromonal skills are a welcome accompaniment as is his jaunty original score. (Caleb Lane plays this role from April 27 to May 3.)

Byers and Rick Gilbert’s scenic design is a lovely red-themed fantasyland conveying a nostalgic childlike perspective of the circus with its small center ring. There’s a tiny piano, a round ottoman and an array of Rossellini’s own childhood toys strung together that form a procession as they’re pulled. On display are cardboard statue-like figures representing historical figures. Upstage is a lectern and behind it is a medium-sized screen. Animator Courtney Pure’s witty images and zany short films featuring Rossellini as other human and animal characters are shown there.

Lighting designer and technical director Jason L. Miller’s contributions add visual and aural luster. Rossellini and her co-director Guido Torlonia perfectly integrate all of the disparate elements with the quasi-lecture into an engaging, thoughtful and humorous presentation.

Aristotle, René Descartes, Charles Darwin, Ivan Pavlov and B. F. Skinner are cited along the way. There’s mention of Rossellini’s mother but not by name though a picture of Ingrid Bergman is briefly seen. Her father, film director Roberto Rossellini, is also alluded to but not named.

A beautiful highlight is the history of how wolves were domesticated into dogs. Utilizing film, puppets, Rossellini, Darcy and Byers, it’s an epic and informative sequence typifying Link Link Circus’s truly unique splendor.