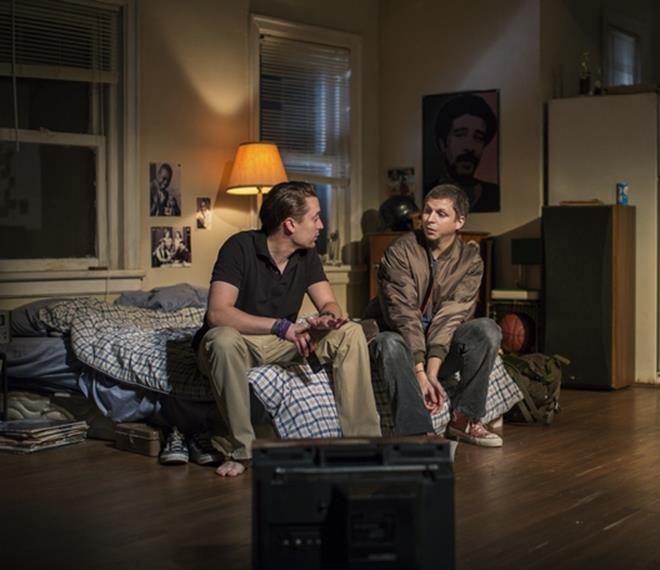 Kieran Culkin and Michael Cera in a scene from “This Is Our Youth” (Photo credit: Brigitte Lacombe)

“This is Our Youth”—playwright Kenneth Lonergan’s most famous work, currently playing at the Cort Theatre on Broadway—made quite a splash when it debuted Off-Broadway in 1996. Considered brave and shocking at the time, the play claims to be a candid story detailing the myriad problems associated with coming of age in the United States. Even its title makes a bold statement: the characters presented represent a revealing archetype of the American teenager. The current revival seems to peddle to same claim; however, its cynical perspective seems to have lost some pith over the decades.

Lonergan’s three-character play follows nineteen year-old college dropout Warren Straub through a trying weekend at his quasi-friend and drug dealer Dennis Ziegler’s apartment. After being kicked out of his abusive, lingerie mogul father’s Central Park West condo, Warren absconds with the $15,000 in cash hiding in the master bedroom and seeks refuge at Dennis’ place. In an attempt to impress his crush Jessica Goldman while simultaneously turning a profit, Warren reluctantly agrees to front Dennis money for a quick turnaround cocaine deal. The result is a pitiful and embarrassing display of adolescent ineptitude.

Despite setting up a fascinating premise and numerous thematic questions, Lonergan largely fails to establish compelling dramatic tension. Instead, his text is dominated by teenage musings, introspective monologues, and circular banter. The characters’ lines include numerous “like’s” and “um’s”—the playwrights’ attempt to experiment with the use of natural speech patterns in dialogue. Indeed, in many respects, “This Is Our Youth” has more in common with a polished preliminary character study than a full-length play. The play’s merits lie more in its insights and experimentation than its structure and content.

Lonergan’s subject matter is similarly stagnant. Though Anna D. Shapiro—this production’s director—does well to add action to the play’s excessive dialogue, the adolescent issues discussed are simply not interesting enough to command over two hours of uninterrupted attention. The events that unfold in Dennis’ comically spacious (even by wealthy New Yorkers’ standards) studio apartment, designed by Todd Rosenthal, fail to culminate in anything noteworthy. The characters’ laughable sense of entitlement and reckless habits evoke more frustration than empathy.

Leading the small cast is Hollywood’s resident underdog Michael Cera in a strong Broadway debut. Most famous for his endearingly pathetic performance as George-Michael Bluth in the cult television series “Arrested Development,” the young actor does what he does best with a twist: Cera’s Warren imbues his trademark, awkward shtick with a darker, more wounded edge. Likewise, Kieran Culkin, who first appeared in the public eye as Fuller in the “Home Alone” franchise, has come into his own as a seasoned actor capable of commanding a large stage. Conversely, famous teenage author and journalist Tavi Gevinson wavers in her professional debut; against Cera and Culkin’s more nuanced performances, her frenetic and loud portrayal of Jessica falls short.

“This Is Our Youth” details a specific subset of affluent, privileged, urban teenagers with no concepts for independence or ambition. In the larger context, the characters’ problems are mostly petty and self-inflicted; consequently, the subject matter is difficult to relate to. I cannot speak for everyone, but the careless spending, rampant drug use, and overinflated egos presented in Lonergan’s play were certainly not characteristic of my youth.

For tickets, call (212) 239-6280 or visit http://thisisouryouthbroadway.com/?gclid=CJL3rK-IsMECFaIF7AodlC4AmA
https://www.steppenwolf.org/
Running time: two hours and 25 minutes with one intermission