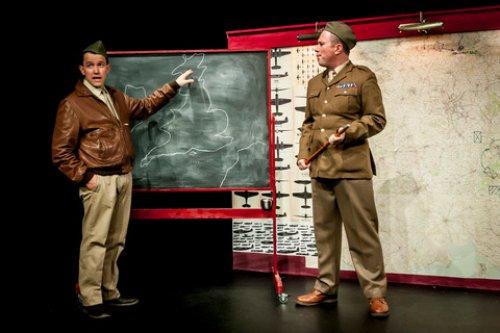 James Millard and Dan March in a scene from “Instructions for American Servicemen in Britain” at 59 E59 Theaters (Photo credit: Lidia Crisafulli)

It’s hard to imagine a more likable play than Instructions for American Servicemen in Britain.  That is not damning with faint praise.  It’s merely the truth.

Likability is in short supply nowadays and the three playwright/performers who created this comedy, based on an actual pamphlet handed to Americans during World War II, have spun the dry, inadvertently funny, official publication into a delightfully involving charmer.  (Copies of the actual pamphlet are available in the lobby.)

Dan March, James Millard and Matt Sheahan, the actors, along with John Walton, the show’s director and co-author, treat the audience members as the American soldiers on English soil for the first time, totally ignorant of the British customs, language, sports, food, etc.   There’s a lot of winking going on to be sure as Lieutenant Schultz (Millard) and Colonel Atwood (March), Americans, and Major Gibbons (Sheahan), an Englishman, share with us everything we wanted to know about Britain but were afraid to ask. 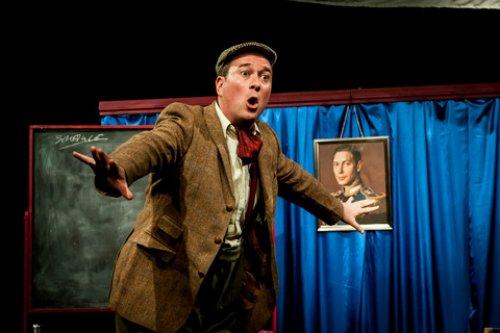 Dan March in a scene from “Instructions for American Servicemen in Britain” (Photo credit: Lidia Crisafulli)

Schultz addresses some questions that have been addressed to him:  “Bombardier Noble, toilet paper will be arriving next week.”  “Private Hallet, we do expect you to sleep on straw mattresses.  If it was good enough for the baby Jesus it’s good enough for your sweet cheeks.”

He warms up the audience with boyish charm, making light of the bad food, wet weather and uptight attitudes until the jovial, but pompous American Colonel Atwood appears.  Atwood awkwardly takes over with bad jokes and gruff banter soon to be challenged by the haughty Englishman, Major Gibbons who complains about how the foreigners, the Americans, have ruined Nether Middleton, “the best kept village of 1936,” by brawling in the local pubs and despoiling the village green.

Conflict continues when Gibbons is told that the pamphlets he had sent to the Americans were used in the latrine as toilet paper, but an air raid brings the three back together.  The conversation turns to London, then Wales, then Scotland, somehow leading to more friction. 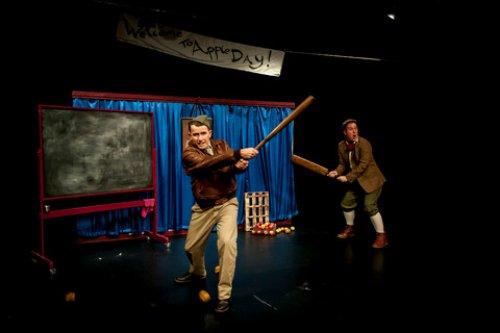 James Millard and Dan March in a scene from “Instructions for American Servicemen in Britain” (Photo credit: Lidia Crisafulli)

Lessons in engaging the British in conversation become unintentionally hilarious while the complex English money system comes in for even more loopy inspection.

Act Two is the more colorful, beginning with a puppet show that is cringeworthy to modern audiences with its flamboyant anti-German propaganda—including jokes about swastikas.  The skit got by on the zest and wit with which it was performed.  Three tiny Hitler look-alike puppets, attached to the three cast members, do a bit called the Nazi Spy School (Schule der Spione) in which the comical puppets plan to sow discord between the British and the Americans.

The rest of the act concerns getting the Americans and local British subjects ready for a visit by none other than Winston Churchill who is coming to inspect the newly arrived American troops, introducing several stuffy English characters (played by the three actors).

Matt Sheahan and Dan March in a scene from “Instructions for American Servicemen in Britain” (Photo credit: Lidia Crisafulli)

The dialogue is clever.  The mood is satisfyingly nostalgic, complete with music from the era and the acting is engaging under Walton’s easygoing direction.

Martin Thomas’ set and costumes evoke the era with skill, supported by the sound design by Jon McLeod.

Instructions for American Servicemen in Britain is presented at 59E59 by Fol Espoir, the Jermyn Street Theatre in collaboration with the cast’s own sketch comedy group, The Real MacGuffins.

Instructions for American Servicemen in Britain (through May 12, 2019)

Fol Espoir and Jermyn Street Theatre, in association with The Real MacGuffins