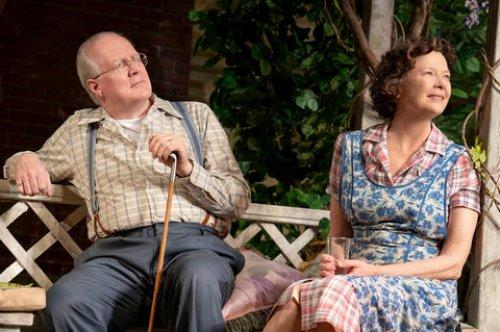 Tracy Letts and Annette Bening in a scene from the Roundabout Theatre Company’s revival of Arthur Miller’s “All My Sons” (Photo credit: Joan Marcus)

All My Sons, Arthur Miller’s first hit and his first play to win him the Tony Award and the New York Drama Critics Circle Award for Best Play, may just be the greatest well-made play written by an American. Following the models of 19th century Norwegian playwright Hendrik Ibsen, Miller wrote a moral drama in which all of the elements contribute to the final effect and every future event is foreshadowed early in the plot. The dominant form of American drama for the first half of the twentieth-century, the well-made play went out of fashion with the advent of Theater of the Absurd in the 1950’s and the Off Broadway movement in the 1960’s. To some extent, television sped this up presenting thousands of well-made dramas structured in three parts from its inception, making it too familiar to the average theatergoer.

Roundabout Theatre Company has mounted the fifth major New York revival since the play’s Broadway premiere in 1947 and given it a first-class production starring Annette Bening, Tracy Letts and Benjamin Walker under the direction of three-time Tony Award winner Jack O’Brien. The play about war-profiteering in airplane parts and moral responsibility as a citizen proves to be extremely timely as we often hear on the news of companies cutting corners for the bottom line, their profits and losses. Based on a true story from 1944, the plot seems just as relevant today as we read of Boeing’s rush to put out a plane without doing due diligence simply to beat the competition.

Unfortunately in a play that is already crammed full of ominous hints, O’Brien’s production is very heavy-handed, underscoring the foreshadowing with a double line under each and every clue and signal of things to come. While the play has been given a most realistic production for the backyard of a house on the outskirts of an Ohio town by set designer Douglas W. Schmidt and costumes by designer Jane Greenwood that are redolent of the late 1940’s, the actors have been allowed to emote from the moment the curtain goes up. If you don’t guess the surprise ending in this production, you haven’t been paying attention. This may be intended to suggest Greek tragedy by the final curtain but there is no need to make it look like an antique production of Medea, Electra or Oedipus the King – which would probably be more subtly staged today.

Like Greek tragedy, All My Sons covers a 24-hour time period in the lives of the  characters. Set in the backyard of the home of the Joe Keller family in a small town in Ohio, the play brings together several seemingly disparate events. The tree planted to honor the family’s older son Larry, who has been missing in action for three years while serving in the U.S. Air Force during W.W. II, has blown down in a storm the night before. The same night Ann Deever, his fiancée and the daughter of Joe’s partner Steve, comes to visit. This is the first time any of the Deever family have returned to town since the trial that put her father in prison for shipping damaged airplane cylinder heads to the Air Force which led to the deaths of 21 pilots. Ann and her mother had moved to New York after the trial to start a new life away from critical neighbors, and her brother George had joined them after being discharged from the army. 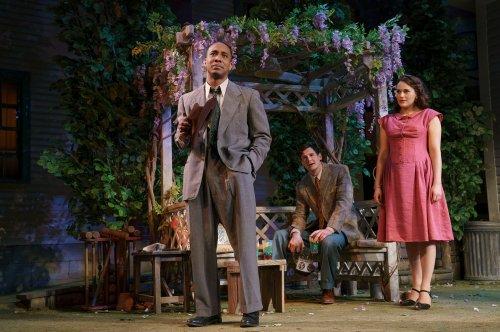 Hampton Fluker, Benjamin Walker and Francesca Carpanini in a scene from the Roundabout Theatre Company’s revival of Arthur Miller’s “All My Sons” (Photo credit: Joan Marcus)

Joe had initially been arrested but had been exonerated in the trial. Kate, Joe’s wife has asked their neighbor Frank to make up a horoscope for Larry to see if the day he went missing is his favorable day, in other words, a day when only good things could have happened to him. Kate believes with all her heart  that Larry is still alive as she has read of other soldiers who have been found alive after longer absences.

We discover that Chris and Ann have been corresponding for the past two years and that Chris has invited Ann to visit in order to ask her to marry him. He has hesitated to ask her as he is suffering from survivor guilt, having lost most of his platoon in the war. Chris is described by the neighbors as being so upright that he makes other people feel dishonest. Kate suspects that Ann has come to marry Chris but refused to countenance such an outcome as she believes Larry is still alive. We hear from the neighbors that they think that Joe is guilty but admire him for having gotten away with it. And then Ann’s brother George, who has not visited their father since his incarceration, calls from the prison in Columbus to say he is stopping by. Kate warns Joe it is time to be smart but he tells her that they have nothing to worry about as George always loved them as did Ann. Miller uses all these events to discuss moral responsibility in a democracy in terms that sound like they were today and not over 70 years ago. Many of the sentiments spoken by Chris resonant dramatically in our own time of unleashed racism and hate, circulation of false news on the social media, and the misuse of capitalism for monetary or judicial gain.

Considering All My Sons contains so much foreshadowing, emphasizing the melodrama proves to be a mistake, giving away the ending long before it is necessary. While the play has in the past been centered around Joe Keller, the father, as it is his tragedy, Bening’s mother steals his thunder. Her dominant performance of a woman obsessed somewhat unbalances the play as she is offstage for a good deal of the time. Letts as the factory owner, on the other, plays Joe as an angry, pugnacious man, leaving us little sympathy for either him or his actions. He may turn out to be the villain of the play, but Miller wants us to see him as a fully rounded person, not a mustache-twirling bad guy of old-time melodrama. 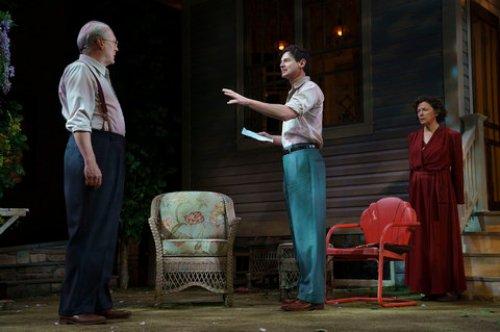 Tracy Letts, Benjamin Walker and Annette Bening in a scene from the Roundabout Theatre Company’s revival of Arthur Miller’s “All My Sons” (Photo credit: Joan Marcus)

The other actors are also infected by this overemotional approach. As the son Chris, Walker comes across very strong as does Francesca Carpanini as his girlfriend Ann Deever. In the case of Ann, this is a mistake as in the play she has waited two years for Chris. Here she is so forceful that she would not have waited for an invitation from him to come and visit, but arrived unannounced. However, as her brother George, the lawyer now based in New York as she is, Hampton Fluker has just the right combination of righteous indignation and emotional confusion over seeing his old friends and neighbors after all these years.

Michael Hayden as Jim Bayliss, the frustrated doctor next door who bought the Deever house, is a presence to be felt while Chinasa Ogbuagu as his wife Sue gives a low-key performance that speaks loud and clear. Jenni Barber as Lydia Lubey, George’s former girlfriend, now married with three children and living on the other side of the Kellers, is amusing as a somewhat scatterbrained woman overwhelmed by the needs of being a wife and mother. As her husband Frank addicted to astrology, Nehal Joshi is a man animated by his passion. O’Brien’s colorblind casting is not as suitable for a small town realistic drama from 1947 but one gets used to it rather quickly as a given and due to the actors’ excellent performances.

The production design also includes Jeff Sugg’s video and projection design which unnecessarily depicts the thunderstorm the night before the play begins along with lighting designer Natasha Katz’s lightning, and John Gromada’s thunderous sound design, plus with the sound of crickets and birds for the day scenes. It is as though the director does not trust the audience and feels that everything has to be underscored to help us understand the plot. This only diminishes the play’s effectiveness as a both a tragedy and a cautionary tale. While Arthur Miller’s All My Sons still works as a very powerful indictment of capitalism in America, the Roundabout Theatre Company production makes it look much older than it actually is with all the emoting that goes on in the course of the evening.