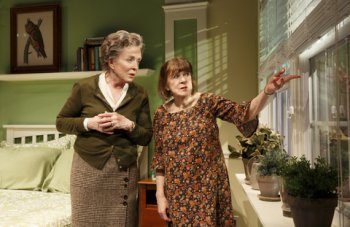 The usually hilarious, wickedly witty, Pulitzer Prize-winning David Lindsay-Abaire (Rabbit Hole, Fuddy Meers, Shrek the Musical) has written a lesser work in Ripcord, the new comedy at the Manhattan Theatre Club.   Although blessed with a first rate production by the Manhattan Theatre Club, fantastic acting and adept direction by David Hyde Pierce, Ripcord is basically a one-joke half-hour sitcom stretched to two hours.  To be fair, the writing is more literate and complex than the average sitcom script, but the attempt at balancing comedy and pathos is just as awkward and obvious.   Had this been a true knock-down-drag-out comedy, the kind that Lindsay-Abaire usually writes, the ending would not be as maudlin as it is.

Abby Binder (a droll Holland Taylor) lives in a two-person room at a fairly upscale senior citizen facility near New York City.  She has gone through a number of roommates because of her nasty temperament and is trying her utmost to rid herself of Marilyn Dunne (a loveable Marylouise Burke) who is her opposite in temperament:  bubbly, optimistic and energetic.  No amount of squabbling, instigated by Abby, will dim Marilyn’s zippety-doo-dah personality nor make her leave. 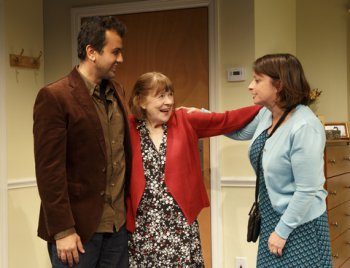 Marilyn does, however, covet the window bed that Abby occupies and the two make a totally inane deal with each other, to wit:  if Marilyn can frighten Abby, she must give up her window bed and if Abby can make Marilyn angry, she must move to another room.  The rest of the play exists to demonstrate the incredible lengths the two take to get what they each want.   The stunts they pull to make the other scared/angry are ludicrously and outrageously over-the-top and roam dangerously into the illegal (drugging, kidnapping, misappropriation of names) and the cruel (tearing up a beloved finger-painting and feigning death).  This device of the bet is faulty from the get-go.   Emotions are difficult to calibrate and these two battling seniors keep denying their feelings, until they absolutely have to give in.

The supporting players are equally fine.  As Marilyn’s daughter Colleen, Rachel Dratch has a dryness that makes her outrageous behavior quite amusing, even when she’s going along with her mom’s most awful deceits.  As her husband Derek, Daoud Heidami makes what might have been a milquetoast into a full-blooded guy.  Glenn Fitzgerald plays Abby’s alienated son who is duped into visiting her at the home.  In his short scene, he eloquently and subtly paints a life of addiction and bad behavior.  He also brings with him a plot-twister that helps end the play on an up note.  Nate Miller as the much put upon resident aide Scotty is simply terrific.  His relationship with Abby and Marilyn, as well as unseen nursing home personnel, is one of elements that keep Ripcord humming along as well as it does. 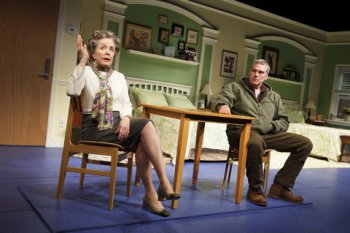 Ripcord is funny, but flawed.  For the record, the title refers to one of the pranks Marilyn pulls on Abby—kidnapping and dragging a drugged Abby to an airplane for an extremely reluctant skydive. See it as an opportunity to watch two extraordinary actresses strut their stuff.

Running time:  two hours and 10 minutes including one intermission