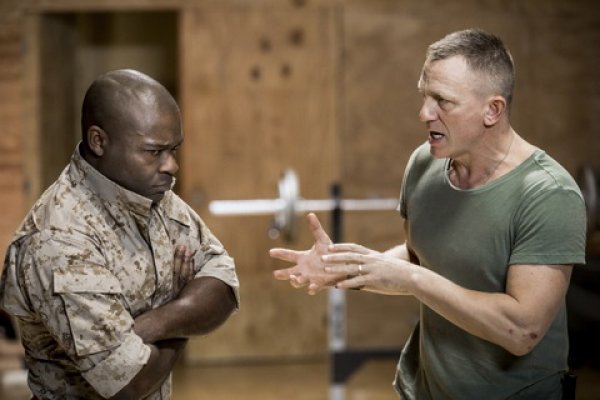 Two ways to invigorate Shakespeare in our time is to either cast actors not identified with classical roles or to reset the play in some unfamiliar setting. Sam Gold’s magnificent production of Othello at the New York Theatre Workshop has done both.

Film stars Daniel Craig (James Bond, Layer Cake, The Mother) and David Oyelowo (Selma, The Butler, Lincoln) join the ranks of major Shakespearean actors. Gold has also turned the entire theater into a wooden army barracks, a setting that works remarkably well for the entire play.  This powerful, intimate, immediate and contemporary production in which the audience is never more than four rows from the action is a riveting experience of a play one might have seen many times before. While the production may be cool in the emotional department, the diction is such that every word registers and the muscular, testosterone-driven cast is always compelling.

The audience sits on three sides of the reconfigured New York Theater Workshop venue. In the playing space are ten mattresses. Various actors dressed in tee shirts or tank tops and shorts mill about playing electric guitars, looking at smart phones or working on lap tops. Foot lockers and duffle bags are at each position. When the play begins, we are plunged into darkness and all the characters are asleep. As we get used to the lack of lighting, we notice that Iago and Emilia (dressed in camouflage) share one bed, and Desdemona creeps out of hers to join Othello on his mattress at the far end.

In the dark, Iago wakes up Roderigo to tell him that Desdemona has eloped and the two of them go to her father Brabantio’s station at the other end to give him the news. The production which contains several new interpretations of famous scenes reinvents the play for our time. The characters mainly wear camouflage which never lets us forget that they are soldiers – and think like soldiers. Scene by scene mattresses disappear until in the final sequence, only Othello and Desdemona’s bed remains, now center stage.

While earlier productions have made Iago’s evil a definite product of racism against the moor Othello, here his wife Emilia is black so that this is downplayed. The play seems to have been trimmed somewhat even at a three hour running time, and wisely, as it is set in contemporary times so that guns are used rather than swords, the fight scenes take place just off stage so that there are no anachronisms and none of the language has had to be changed. 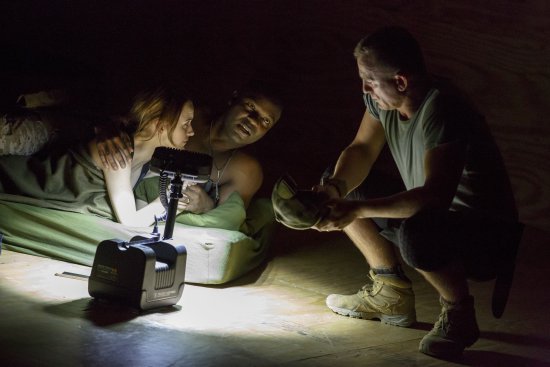 There is a certain amount of judicious doubling of characters (The Duke of Venice and Lodovico, etc.) who do not appear at the same time, making this a small cast and an intimate play. The usual crowd scenes have the minimum of bystanders which does not affect the play’s power at all, possibly enhances it. At least two scenes take place around gym equipment, a clever device for a play that is almost entirely based on well-built soldiers keeping in readiness for war or a local insurrection. Except for the presence of Othello’s wife Desdemona, this is an all-male precinct and director Gold makes it very obvious.

While Craig has not had a lot of stage time since his early training and has appeared only in contemporary plays in recent years, he commands the stage at all times. As the villain Iago who has obtained a reputation for being “honest,” he is able to be two-faced at all times without ever betraying his deceit. He is both comic and serious, creating much useful stage business to make his character three-dimensional. We know the sinister nature of his Iago from the opening scene and he keeps the tension up as he manipulates all of the others for his own goal: getting his revenge on Othello for passing him over as his lieutenant for the younger and less well qualified Michael Cassio.

Oyelowo, a member of the Royal Shakespeare Company since 1999 who has appeared in Anthony and Cleopatra and Henry VI, puts his training to good stead, making his Othello more interesting than usual. He gives Craig’s Iago a run for his money in playing what is usually considered the lesser part. With his obvious physicality, he is a powerful figure both as a man and as a leader. As Iago plants the seeds of jealousy, he becomes a caged animal just raring to break out and his final scene with Desdemona is a wonder to behold. He is a big man playing a big character.

Rachel Brosnahan as the confused Desdemona accused of what she has not done is excellent as a contemporary army wife trying to deal with a situation beyond her control. Beautiful of face and petite in body, she holds her own with Oyelowo’s Othello even though he dwarfs her in size. As Iago’s wife Emilia, Marsha Stephanie Blake is both feisty and amusing, giving as good as she gets from the men around her. She and Craig’s Iago have an easy, banter relationship – until she stands in the way of his revenge on Othello. 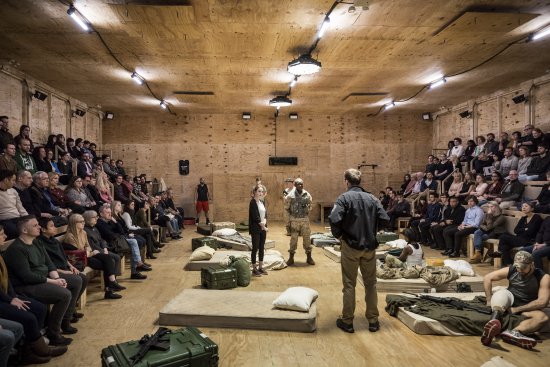 Finn Wittrock, who has appeared on Broadway in Miller’s Death of a Salesman as Happy and will appear in Williams’ The Glass Menagerie as the Gentleman Caller later this season, is a stalwart Cassio. Though he seems to have less stage time than usual, he is a rugged and staunch lieutenant and convinces us that aside from his being unable to hold his liquor he is a fine soldier.

Matthew Maher, who has worked with Gold in both Annie Baker’s The Flick and Uncle Vanya, makes the gullible Roderigo less comic than usual and more sympathetic as Iago turns him around his little finger. Using a Middle East accent, Nikki Massoud makes a distraught Bianca, Cassio’s local girlfriend, a believable resident of Cyprus where most of the drama takes place. Playing various roles, David Wilson Barnes, Glenn Fitzgerald, and Slate Holmgren give able support.

The all-enveloping scenic concept is the work of Andrew Lieberman. David Zinn’s contemporary army uniforms and sports clothes are perfect for Gold’s modern concept. Among Jane Cox’s lighting innovations are flashlights in the dark, overhead lights, and fluorescent tubes which never let us forget that we are in an army barracks. Excellent work has been done by voice and language coach Andrew Wade, fight director Thomas Schall, and dramaturg and text consultant Michael Sexton. Kathy Fabian’s property design gives the barrack room a lived-in look which adds to the believability of the setting and the life style. The original music composed by Bray Poor and Blake DeLong is mainly played live by DeLong as one of the soldiers.

Aside from bringing Shakespeare’s Renaissance Othello into the twenty-first century, Sam Gold’s casting coup has made this a must-see event. No matter what you have seen Daniel Craig and David Oyelowo in before, their performances here will astound you.

Running time: three hours and 20 minutes with one intermission