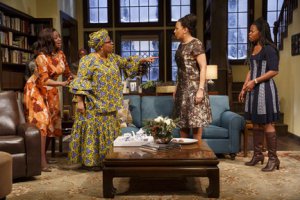 Danai Gurira’s Familiar is nothing short of remarkable with its witty and interesting characters, family drama, emotional moments, and thought-provoking nature. The play quickly introduces the audience to this complex family of Zimbabweans who live just outside of Minneapolis as they gather together to celebrate the wedding of daughter Tendi played by Roslyn Ruff. From the beginning, it is apparent that this family has an intense dynamic as personalities clash over everything from life choices, to values, to honoring traditions, and it only becomes fierier as the play develops.

Under Rebecca Taichman’s careful direction, Familiar hones in on this family’s struggle with keeping traditional African customs alive in a modern day society. With Tendi’s impending nuptials to a Caucasian man, Chris (Joby Earle), the extended family flies in from the homeland and is determined to keep their heritage alive.

The family tension is defined in terms of the strong female relationships between mother Marvelous (Tamara Tunie) and the bride-to-be, who differ when it comes to wedding plans as well as the bride and her younger sister, Nyasha (Ito Aghayere) who clash over lifestyle choices. Big sister is the accomplished, serious professional woman who is strongly tied to her religious beliefs and customs, and the free-spirited little sister (who wasn’t even asked to be a bridesmaid) who is tired of being berated for her choices. Tendi looks more to her aunt from Africa for guidance than her mother and is determined to have her look upon her choices as favorable. The source of comic relief in Familiar is Donald, the father (played by Harold Surratt), who sits back observing all the conflict and tries his best to take it all in stride. This family is one for the ages and how they deal with each other and common familiar issues is something all audiences can relate to. 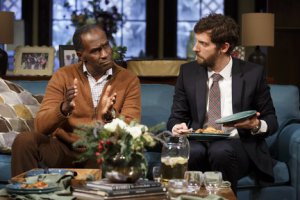 The main theme of assimilation is really brought to light when estranged Aunt Annie (Kimberly Scott) flies in from Zimbabwe to perform the bridge-price ceremony, with one priority in mind, as she is struggling with the plummeting value of currency in her homeland. Everything about her – from her style to her beliefs – is a far cry from her sister, the well-adjusted Americanized Marvelous, whose suburban lifestyle agrees nicely with her choices. While this family works to integrate the old with the new, it is evident that the process certainty won’t go down without a fight – or two!

Familiar is acted with such passion and spirit and looks at a family dynamic from a different lens. The play brings all the conflict to the surface and doesn’t hold back when it comes to expressing the most intimate thoughts and beliefs of this unique group. All of the personalities are larger-than-life in one way or another and it makes keeping up with each family member very enjoyable. It is extremely interesting to witness how the women in this family assert their power and define their place in this familiar unit, as well as the modern world. The passion and talent that this cast possesses really makes the play special and challenges audiences to think about the bigger issues that still exist in a time of cultural change.

One item of note is the map of Zimbabwe that the father is constantly re-adjusting on the wall, while his wife and younger daughter insist on taking in down. This action may be indicative of the physical tumult in their home country that is reflected in their present-day family hierarchy. 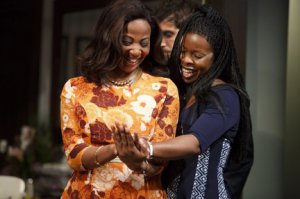 Set designer Clint Ramos uses a well-furnished home setting to reflect suburban life in Minnesota. The furniture and decorations are cozy and inviting, while specific decoration such as family heirlooms and the map of their homeland add a personal touch. The set is in two-stories, with the living room and kitchen on the bottom floor and the upstairs bedrooms above the main floor. The windows are daintily sprayed with fresh white snow to reflect the beauty and coldness of the Midwestern winter season.

The lighting designer, Tyler Micoleau, intricately captures the openness and scale of the home by keeping all rooms equally well-lit. The costume designer Susan Hilferty nicely captures the personality of the family members with their outfit choices — such as the upright daughter in a clean-pressed dress and high-heeled boots, the younger sister in pajamas representing her casual and relaxed attitude, and the auntie from Africa in traditional frock and cultural dress.

An explosive masterpiece, Familiar will keep audiences entertained, enthralled and pondering the power of culture in modern society. Don’t miss this opportunity to catch Gurira’s unique style and gifted storytelling. Gurira is also the author of Eclipsed which has just transferred Broadway’s John Golden Theatre after its sold out engagement at the Public Theater.

Running Time: Two hours and fifteen minutes with an intermission