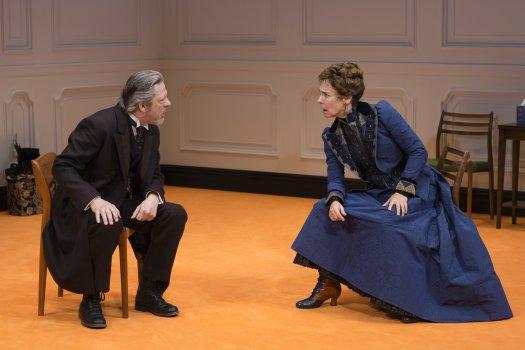 Chris Cooper as Torvald and Laurie Metcalf as Nora in a scene from “A Doll’s House, Part 2” (Photo credit: Brigitte Lacombe)

When Nora slammed the door and walked out on her possessive and chauvinistic husband Torvald at the end of Ibsen’s A Doll’s House back in 1879, the sound reverbated around the world. The rise of the Modern Drama is dated from this event. It also started a debate still going on today as to what happened to Nora.

Playwright Lucas Hnath has taken up the challenge and written a witty, funny and clever sequel called A Doll’s House, Part 2. The stellar Broadway cast to be seen at the Golden Theater offers three time Emmy Award winner Laurie Metcalf, Academy Award winner Chris Cooper, Tony Award winner Jayne Houdyshell and rising star, two time Tony nominee Condola Rashad. If anyone thinks that this is arrogance to tamper with a classic, Hnath has already written successful and well-researched plays about Isaac Newton, Walt Disney and Hillary Clinton. What is also remarkable about the new play is that aside from being faithful to the Ibsen precursor, it has a decidedly modern sensibility. Not surprising with director Sam Gold at the helm.

Hnath’s new story is absorbing and twisty, interestingly creating an entirely new set of ethical and social questions than was handled by Ibsen in 1879. He has handled it in a similar fashion to Bergman’s Scenes from a Marriage but without the painful emotional fireworks. It is 15 years since Nora had left her husband, stating he had no further claim on her. She has not been heard from since. Having become a famous feminist author with advanced ideas writing under a pseudonym, she has recently discovered due to a blackmail attempt that Torvald has never divorced her which she assumed he had done. Having lived as a single woman, signing contracts, controlling her own money, and having relationships with men not her husband, she is guilty of a criminal offense under Norway’s laws at the time and can be sent to jail. She arrives at his door to obtain her divorce to really be a free woman.

Miriam Buether’s minimalistic setting for a 19th century front room with only a couple of chairs and a tiny side table features (as may be expected) a huge door. There is a loud series of knocks and Anne Marie, formerly the nanny, now the housekeeper, opens the door to Nora who she is expecting from a letter she has received. As Nora sees it, it is very simple: she needs Anne Marie’s help to get Torvald to file for a divorce as a man doesn’t have to explain his reasons. If she as a woman were to file, she would have to destroy his reputation by proving cruelty or abuse or some other transgression. 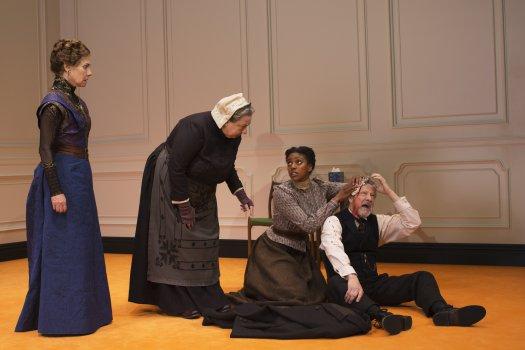 Unfortunately, when Anne Marie hears that Nora’s books advise women to leave their husbands, she does not want to help. She resents having given up her life to bring up Nora’s three children and feels loyalty to Torvald who has given her a home all these years, although Nora points out that Anne Marie had also given her daughter up in order to work for the Helmers. Anne Marie counter that she had no options as a woman with no education: only working in a factory, working as a prostitute or giving up her child to work as a nanny. She recommends that Nora retract her writings and give up her new way of life.

Nora then meets with her grown-up daughter Emmy now 23. She has yet a different view: having never seen a successful marriage what she most wants is a husband to take care of her, in total opposition to Nora’s beliefs and writings. She suggests another solution to the issue of the lack of divorce papers in a method that Nora sees as totally illegal.

When Torvald interrupts Nora’s visit, he at first doesn’t recognize her – it is 15 years later and Nora is dressed in the very finest (in David Zinn’s attractive and stately costumes). For him there is another aspect and he is not willing to file for divorce as it will reflect badly on him after all this time. There are things Nora doesn’t know about the intervening years.

The play becomes a debate on marriage and responsibility that resonates in our world as well. What Hnath has done is to give each character a completely convincing and contrary point of view. The embittered Torvald is no longer the villain but a complex feeling man. He believes that Nora wasn’t fair to him by having her epiphany and then walking away from their marriage, cheating him out of dealing with all that she had brought up. Each character sees things from only his or her point of view. The ironic ending settles several of the questions, leaving others unanswered. 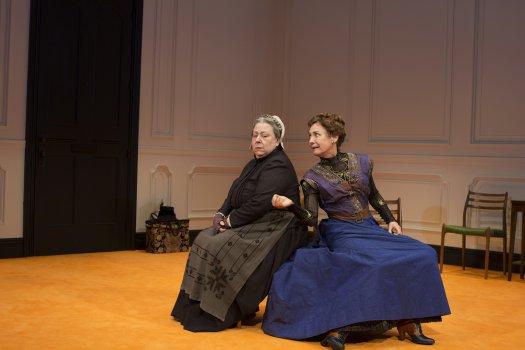 Jayne Houdyshell as Anne Marie and Laurie Metcalf as Nora in a scene from “A Doll’s House, Part 2” (Photo credit: Brigitte Lacombe)

Gold’s unobtrusive direction on an almost empty stage differs from his recent Glass Menagerie and Othello as he allows the actors and the dialogue to speak for themselves, rather than imposing any directorial touches. Metcalf is quite dour and somber as the woman of the world who has had time to consider the social problems of her world and sees things based on her personal experience. Her timing is impeccable and she obtains a great many laughs. The play is quite funny in its Shavian way. Houdyshell is amusing as a woman with a limited view of the world who sees everything in conventional terms.

When we meet daughter Emmy, Rashad is cool and self-possessed as the 23-year-old who knows exactly what she wants and is willing to pay the consequences. All of Cooper’s scenes work off of Metcalf’s Nora. At first he is stand-offish and angry. In their next scene, he is confused and perplexed. Ultimately, he is conciliatory and probing. Hnath’s Torvald is a good deal more complex than Ibsen’s husband, a man who has had years to consider his choices and how life has treated him.

While this is a play of ideas, the debate is always engrossing, always surprising. At no point does the dialogue or the confrontation lose our interest. Under Jennifer Tipton’s lighting, the characters are as if put under the microscope. Although the facts deal with the 19th century, the issues being raised could be today. Nor does the play take a strictly feminist view point: Hnath has considered the situation from all sides. It would probably help to know Ibsen’s play but it is not necessary as all that you need to know is explained. A Doll’s House, Part 2 is that rare play, an historical drama that plays as though it is of and about our time.