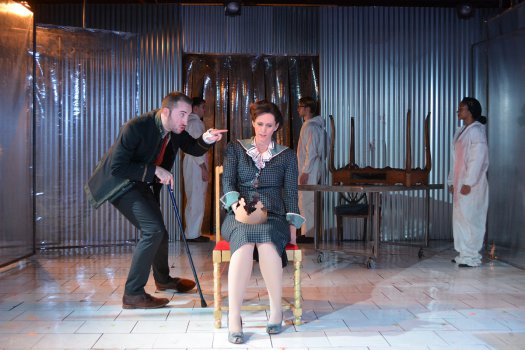 Max Hunter and Robin Abramson in a scene from “Richard III” Photo credit: Courtesy of The Bridge Production Group)

Shrouded by clear shower curtains, the actors enter the stage and bring out furniture, including a gramophone, and chat with each other.  There is newsreel footage proclaiming the end of W.W. II in Great Britain.  Half-baked anachronisms pile up during the next two hours and half hours. These include the intermission shtick of old-time drive-in movie announcements, “The show will start in five minutes…visit the snack bar… for buttered popcorn.”

The curtains part and the cast clumsily dances to a recording of The Village People’s “YMCA.”   Dead or Alive’s “You Spin Me Round” is played during the fashion show-style murder of the two little princes in the second act with equally herkey jerky choreography.  The videos of Lady Gaga appear to be a major influence on Eva Jacobs’ movement direction.  There’s also a production number set to John Philip Sousa’s “Stars and Stripes Forever.”

Clear plastic screens on wheeled metal frames are moved around for new scenes.  Carnage is indicated by the actors squeezing bottles of stage blood, splattering red all over them à la American Psycho.  The wooing of Richard’s sister-in-law, Lady Anne takes place in a morgue as the couple tangle around King Edward’s corpse on a gurney. 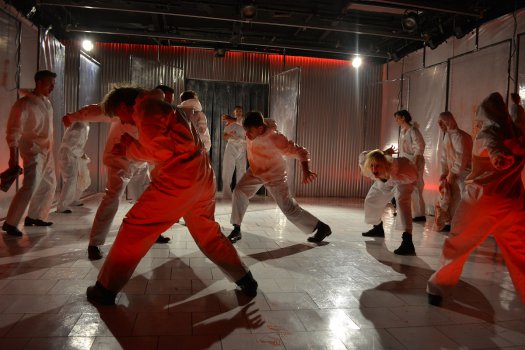 The Cast of “Richard III” (Photo credit: Courtesy of The Bridge Production Group)

For those who do not remember their British history, in 1471 after his brother Edward becomes King of England, Richard, the Duke of Gloucester, plots to succeed him.  Following Edward’s death in 1483, he accomplishes this by arranging the murders of those who are in his way of succession.  A rebellion to overthrow him soon ensues.

Oddly, Richard’s famous opening lines in Shakespeare’s play beginning “Now is the winter of our discontent,” are here spoken by Edward.  This is emblematic of how disjointed and often unclear this adaptation is.

Perpetually twitching, hobbling around on a cane with a pigeon-toed foot, his arm in a sling connected to a back brace, Max Hunter certainly has worked on the physicality of the title character.  The youthful and engaging Mr. Hunter however lacks the vocal ability and stature for his characterization to fully succeed.  There is whininess rather than mellifluousness and the preoccupation with infirmity leads to collection of distracting tics. 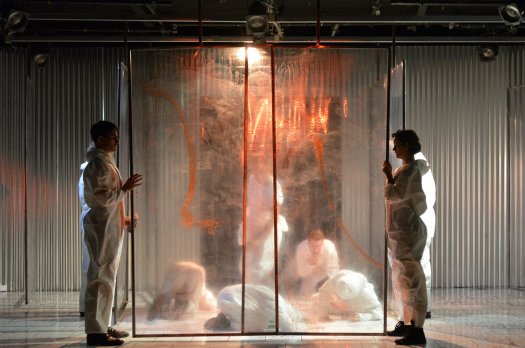 The Cast of “Richard III” (Photo credit: Courtesy of The Bridge Production Group)

In addition to portraying the leading role, Mr. Hunter is also the director.  While not delivering the optimum in terms of performances, his physical staging does have a briskness that serves the show well.

Scenic designer Seth Byrum’s creations are clever and simple.  The lighting and projection design by Cheyenne Sykes is proficient and yields some striking visual effects.  Nicolle Allen’s costume design is mostly a collection of vintage garments that functionally represent the characters.  At times cast members are clad in hooded white parachute suits.

This ambitious if highly flawed production is The Bridge Production Group’s inaugural effort.  Their mission is “dedicated to disrupting the conventional assumptions about classic theatre… [by] dismantling and exploiting an audience’s expectations of mundane theatre…[thru] restructuring and reimagining scripts, utilizing mixed media, and blurring genre and theme, we create an experience that is visceral, stimulating, and immediate.”

In 1471, after his brother Edward becomes King of England, Richard the Duke of Gloucester plots to succeed him.  Following Edward’s death in 1483, he accomplishes this by arranging the murders of those who are in his way of succession.  A rebellion to overthrow him soon ensues.

There have been many acclaimed Shakespearean productions that have successfully been set in diverse time periods and that have employed unconventional approaches.  This is not one of them.  Influenced by the films of Quentin Tarantino and Baz Luhrman and the television series Dexter, this production is so crammed with flashy digressions that haven’t been coherently integrated together that they overpower the story for no great effect.