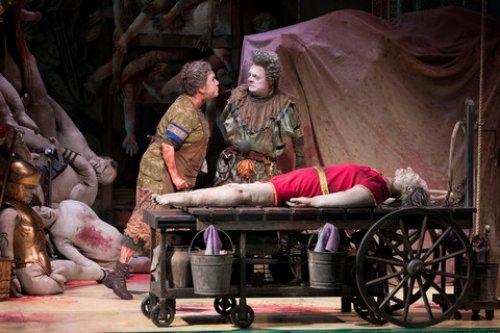 Kristine Nielsen and Nathan Lane in a scene from Taylor Mac’s “Gary: A Sequel to Titus Andronicus” at the Booth Theatre (Photo credit: Julieta Cervantes)

Playwright Taylor Mac’s Broadway debut, Gary: A Sequel to Titus Andronicus, comes with a great many pluses: three consummate clowns, Nathan Lane, Kristine Nielsen and Julie White, directed by George C. Wolfe, and a terrific set by Santo Loquasto. This ribald yet philosophical downtown comedy is making its debut at the Booth Theatre, usually home to sedate, serious dramas. While low humor seems to be the name of the game, the play also has a good deal to say on various topics like comedy and tragedy, political systems, class structure, the little people who generally do the dirty work, and parodying Elizabethan revenge plays. The humor in Gary is not for everyone, but those who relish low comedy will have a ball as do the actors on stage.

As the subtitle states, the play is set in 400 AD in the aftermath of Shakespeare’s  tragedy Titus Andronicus, which ends with most of the characters killed by each other in a series of revenge plots at the fall of the Roman Empire. In the new play, we are in Titus’ banquet hall which is now a charnel house sheltering 1,000 dead bodies. Janice (Nielsen), a maid, has the job of cleaning up the bodies and the hall in preparation for the inauguration of the new emperor. Enter Gary (Lane), a street clown, who at the end of Shakespeare’s play was condemned to death, but now apparently has talked his executioners out of it as he has volunteered to help clean up the bodies. He argues with Janice as to which of them is in charge, but she explains that there is a technique to it which she alone knows and he has to follow her orders. 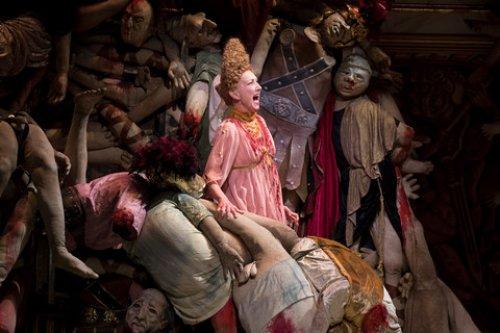 Julie White in a scene from Taylor Mac’s “Gary: A Sequel to Titus Andronicus” at the Booth Theatre (Photo credit: Julieta Cervantes)

While avoiding doing much work, Gary reveals that he has the ambition to go from street clown, to court Fool, they who “tease out our stupidity with brains,” and so save the world. Gary and Janice talk about their places in the world at the bottom of society and how the maids and clowns of the world are generally ignored by the rest. Examining all of the dead bodies at their mercy, Gary talks about turning tragedy into comedy as his way of saving the world. They talk about the political state of things: Janice tells us they live in an “autocracy turned to a democracy turning back to an autocracy.” Janice, an early feminist, complains that there have been no female emperors and that it is the men who start all of the wars. Ultimately, she declares that it is time for an emperor “who knows a thing or two about how to make a thing work.” Having had a near death experience before the play began, Gary declares he has a “responsibility” to save the world.

Julie White as the midwife who attempted to save the baby at the end of Titus and ended up with her throat slit appears in an opening curtain speech spurting blood from her neck in comedic fashion and later hows up alive among the dead bodies about two–thirds of the way through the play. Speaking in a cultivated British accent, unlike Lane and Nielsen who speak in various forms of Cockney, White who continually has blood coming out of her regrets not saving the baby and wonders what she can do about it. She gets caught up in Gary’s idea to turn things into a comedy for the entertainment of the inauguration, while Janice finally takes things into her own hands. 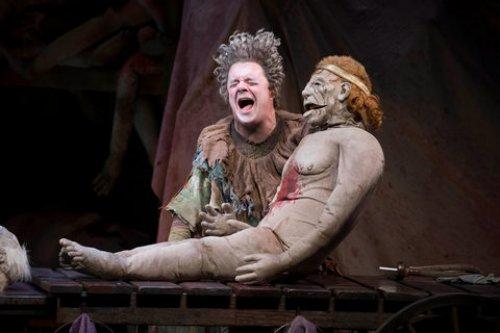 Nathan Lane in a scene from Taylor Mac’s “Gary: A Sequel to Titus Andronicus” at the Booth Theatre (Photo credit: Julieta Cervantes)

Mac’s play is alternately in rhymed couplets, blank verse and prose, much like Elizabethan plays which it parodies. The low comedy includes flatulence jokes, penis jokes, bodily fluid jokes, puns, word play, and visual gags. Santo Loquasto’s immense Roman banqueting hall with its piles of mannequins of dead, mostly nude male bodies is remarkable, as well as the elaborate red and gold curtain that initially hides it. One assumes that he is also responsible for the life size mannequins which resemble puppets in all shapes and sizes, some costumed, some not.

The rest of the production is also in on the joke. Ann Roth is responsible for the Roman costumes which have an Elizabethan sensibility. The elaborate hair designs are the work of Campbell Young Associates. Included in the stellar production team are movement by mime Bill Irwin and martial trumpet music by Danny Elfman, the two-time Emmy Award winner and three-time Academy Award and Golden Globe nominee. The off-stage sounds as well as the gassy noises that come from the dead bodies are the work of designer Dan Moses Schreier. The lighting which seems to travel from daylight to evening has been created by the legendary team of Jules Fisher and Peggy Eisenhauer. 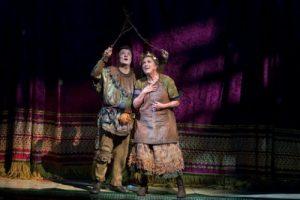 Nathan Lane and Kristine Nielsen in a scene from Taylor Mac’s “Gary: A Sequel to Titus Andronicus” at the Booth Theatre (Photo credit: Julieta Cervantes)

Taylor Mac’s Gary: A Sequel to Titus Andronicus seems a strange choice for Broadway with its rowdy low humor. However, in the hands of such comedic talents as Tony Award winners Nathan Lane and Julie White and Tony nominee Kristine Nielsen (who has previously appeared in Mac’s Hir at Playwrights Horizons), it is a riotous experience with a philosophical bent. In the capable hands of director George C. Wolfe who has often been associated with cutting edge works by new authors, the actors milk each gag dry but not before getting the maximum effect out of each. Wolfe also keeps these larger-than-life talents in check so that they do not end up over-the-top as they so often do in lesser hands. A word of advice: it does help with the names mentioned if you look up the plot of Shakespeare’s Titus before you see Gary.

Running time 90 minutes with no intermission