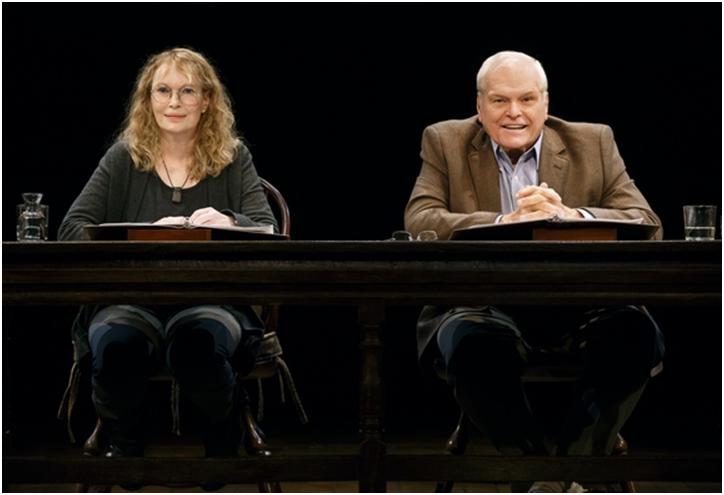 If you have not seen it previously, you would not guess how entertaining, wise and witty the revival ofA.R. Gurney’sLove Letters turns out to be: it is a play in which two actors, one male one female, sit side by side at a table and read their missives in a 50-year correspondence. However, in the hands of pros like Brian Dennehy and Mia Farrow this becomes something quite special. In this simple form, we experience the entire lives of two people who have been friends (and later lovers) over the course of five decades while mostly apart.

While Dennehy’s proficiency on stage has been much in evidence in recent years with acclaimed performances in Death of a Salesman and Long Day’s Journey into Night, the real surprise is Farrow who has not had a Broadway run since the 1980 very light-weight Romantic Comedy. Only allowed to act with her voice and her face in this play, Farrow is a revelation. As rebellious, spoiled,rich Melissa Gardner, she beguiles with her girlish irreverence and later cynical attitudes about the world as she finds it. She is convincing at all the stages in her life from elementary school, through finishing school, through marriage and divorce, a career as an artist, and finally through her breakdowns and trips around the world in her attempt to find herself. She sparkles as she reads Gurney’s shrewd and clever lines that reveal Melissa’s unique take on life. She is not only a pleasure to watch and to listen to, but her Melissa is a memorable creation. Her enthusiasm for her role is infectious and we are mesmerized by her enjoyment.

Love Letters begins with Melissa and Andrew Makepiece Ladd III, East Coast WASPs born to privilege, meeting in second grade. Their early notes and postcards are about holidays (Valentine’s Day, Halloween, Christmas, etc.) and invitations accepted and thank you notes after parties. We learn of Melissa’s mother’s divorce and her remarriage. When both young people are sent off to boarding school, they complain of the demands of private school and what is and isn’t allowed. When they reach college, we hear of dances and football weekends and early fumblings at sex. Melissa complains about hating letter writing and demands that Andy call her, while he writes that he is most at ease putting his thoughts down on paper where he can express his true self. She complains that he is too traditional and always does what his parents want him to do, a condemnation which is often true.

After college, they are separated for long periods of time while Andy is first in the navy, and then both marry other people. Melissa’s art career takes off, and Andy becomes a lawyer and has several children. Melissa’s life crumbles with her messy divorce and eventual drinking problem while Andy goes into politics and drifts away from his wife. As middle-aged people they find each other again and now their letters are about eagerly awaited meetings arranged and meetings canceled. 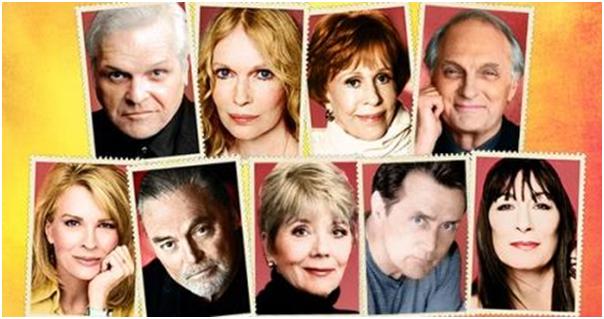 Gurney’s play is very funny in its seeing life from a child’s point of view (Melissa’s agreeing to be Andy’s Valentine “unless I have to kiss you,” to Andy’s view from camp that the real Indian who teaches them about six plants a day “is O.K., except he forgot about poison ivy”) to their sardonic adult view of life (Andy: “What are you doing in Aspen?” Melissa: “Going steadily down hill.”) The play is also extremely poignant as we see that each is the rock that the other depends on as they travel through life’s vicissitudes. While they are apart most of their lives, their correspondence as confidants is a kind of 50-year love affair as each cannot do without the other. Each is truly depicted as the other’s best friend.

Under Gregory Mosher’s subtle and assured direction, the two performers always seem age appropriate to their characters. While they do nothing to disguise their real ages, it is as though two older people have gotten together to review the letters that they have written to each other over a lifetime. While neither actor looks at the other until the end of the play, the pretense that they are reading their own letters to each other as they write them never falters for a moment.

While Farrow has the showier role as the flippant and insubordinate Melissa, Dennehy holds his own as the more traditional, sturdy scion of good breeding and good behavior. His more staid responses to Melissa’s grievances couch an unexpressed discontent with the establishment that he is willing to go along with until it all gets too much for him and he needs a change. The neutral costume design by Jane Greenwood and the simple set by John Lee Beatty permit the play to speak for itself while the mind fills in the passage of time.

You have only until Oct. 10 to catch Brian Dennehy and Mia Farrow in Love Letters. They will be replaced on a four-five week playing schedule by other legendary stars. Announced so far are Carol Burnett and Dennehy (Oct. 11 – Nov. 8), Alan Alda and Candice Bergen (Nov. 9 – Dec. 5), Stacy Keach and Diana Rigg (Dec. 6 – Jan. 9), and Anjelica Huston and Martin Sheen (Jan. 10 – Feb. 15.) It will be interesting to see both how the replacements interpret these same roles and how they relate to each other.

Running time: 90 minute with no intermission