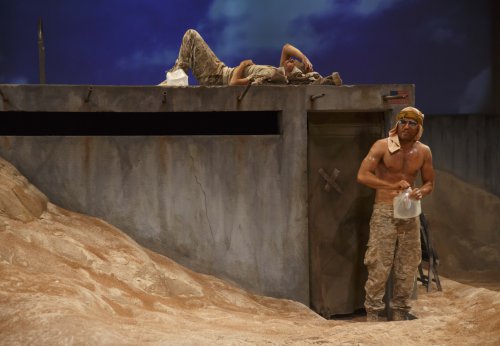 “Don’t step on the sand,” cautions the usher as she hands out programs and directs patrons to the their seats at The Gym at Judson.  Indeed, the stage and floor is filled with sand that’s been artfully arranged into a barren vista of mounds and dunes.  There is a concrete staircase leading to the roof of a small structure.  Above is a rectangular screen where later images of the sky and a forest are projected. There is a concrete block with a pole in it on stage.  Unfortunately Raul Abrego’s impressive set is the most outstanding feature of playwright Daniel Talbott’s cryptically titled and exasperating 90-minute War Is Hell fantasia, Afghanistan, Zimbabwe, America, Kuwait.

“The not-so-distant future.  A worn-down outpost in the desert.  Hot and bright.  Hallucinatory hot.”  The play begins in darkness as a character billed as “Serbian Woman” dramatically appears and speaks in her own language and then switches to English.  She recounts her brutal gang rape by soldiers.  Later other characters in the play allude to this incident. Why is her nationality stated if the play doesn’t take place in Serbia?  Not specifying the locale of the action appears to be an attempt to achieve a metaphorical dimension.  It’s really just a pretentious mishmash of battlefield clichés.

Two U.S. soldiers, one shirtless and loquacious, the other clothed and quieter, converse and argue.  There is confusion about what day it is. Among their often raunchy contentions are which Playboy playmate is more attractive, Miss January or Miss March.  They are waiting not for Godot, but for a reconnaissance team as their water and protein bar supply is dwindling.  Eventually a third soldier, a bombastic, lone survivor from another outfit, joins them.  There is more squabbling as they continue to wait and as their provisions run out.

Short scenes are punctuated by strobe lights, loud music, and blackouts.  In fantasy and flashback sequences the soldiers interact with relatives and other figures.  Two silent, ominous, masked soldiers pop up from time to time.  A battered boom box plays contemporary songs such as Taylor Swift, as well as period ones by Fleetwood Mac, and the 1940’s standards, “Swinging on a Star,” and “I’ll Be Seeing You.”  The use of those W.W.II-era gems is no doubt an attempt to add a layer of ironical ambiguity to the proceedings.

Besides evoking the terrain of Samuel Beckett, Mr. Talbott’s tiresome script also brings to mind the universe of Sam Shepherd with its combative characters forcefully clashing and alternating with poetic discourses.  The essence of the Vietnam films of Francis Ford Coppola and Olivier Stone waft through this hollow and ultimately pointless work as well. 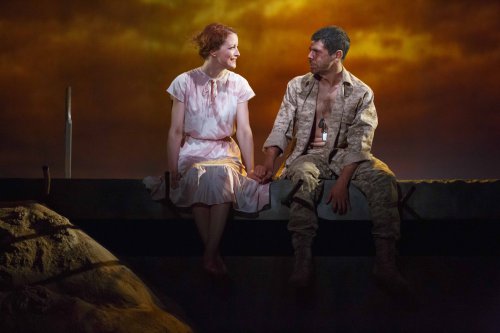 Talbott also is the director and much of his results with the hardworking cast come across as over eager acting students in a scene study class.  At times, one fully expects to hear the voice of a teacher declaring, “What was your objective?  Continue to work on the sense of heat.”  The physical staging is accomplished and the visual imagery does sustain interest.

The distinguished actress Kathryn Erbe with her tremendous dignity and her commanding presence is very moving as one of the soldier’s mothers.  As the recurring Serbian Woman, Jelena Stupljanin very effectively brings depth and focus to this role that is a cypher.

Seth Numrich, Brian Miskell and Chris Stack all demonstrate talent and vibrancy as the soldiers.  Bound by the writing and direction, their performances are often so overwrought and heightened to the point of caricature.  Jimi Stanton is suitably boyish and innocent as one of the soldiers’ brothers.

Irritating though watchable, Afghanistan, Zimbabwe, America, Kuwait, by the time of its conclusion feels like an academic theatrical exercise of little consequence.

The Gym at Judson, 243 Thompson Street, in Manhattan