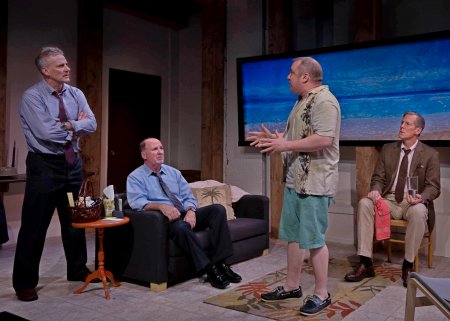 In a town like New York City, one requires a certain steel of heart to carry on. The city can be draining in many ways, some more literal than others, and the never-ending chase for career freedom, financial gains, and social status are among many factors which challenge almost endlessly. This is why it is extremely important to create and maintain a healthy work/life balance, and the things that excite, inspire passion, and bring comfort into daily life are the things which cannot be forgotten.

A simple message is at the center of Sheldon Bull’s new play Mallorca. As timeless as the theme may be, this doesn’t necessarily mean it is self-evident. Surrounding the dysfunctional friendship of four men, in some way every character in this play has left an important aspect of his life unattended.

On a cold winter night in New York City, we are introduced to Stan (L.J. Ganser), who is getting ready to go to a Knick’s game with an old friend—Julius.  At the moment though, Stan is on the phone with his wife, who left in the middle of the night on a business trip to Chicago without telling her husband—this not being the first time. Though we never meet his wife, this phone conversation provides all the context needed to inform us that Stan, frustrated and annoyed, is doing everything he can to resist the distance he feels growing between his wife and himself.

This somber phone conversation is cut short with a knock on the door. While Stan is expecting Julius, the friend who invited him to the game, it turns out to be an old acquaintance named Leo (Brian Russell). After the initial surprise, Leo and Stan deduce that Julius has much more in store for them than an evening of hot dogs and beer, and thus begins this unexpected reunion of the four old friends.

In this rag-tag band of brothers, each one has his role that he plays in the group. Led by Ganser, Stan is at first the most put together (despite his domestic problems), but as the play continues and bigger problems unfold, even Stan can’t keep it together. This is mainly fueled by Julius (Rory Scholl), a manic and impish man who can’t help but wear his heart on his sleeve. Always contradictory, Scholl is emotionally present in a comic way and is the butt of many-a-joke. Scholl plays the role well, and though the character’s entrance is teased for quite some time, his arrival is a relief and really helps to kick-start the story. 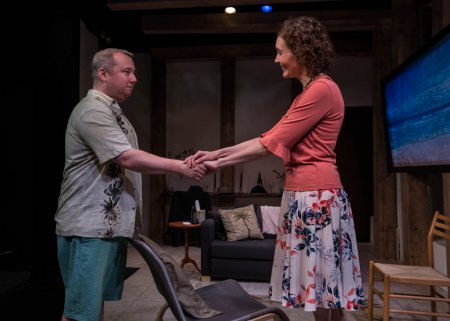 The quirkiest and most ostentatious of the bunch, Arthur (Steven Hauck), is a welcome addition to the pack. Hauck’s Arthur is a thin-lipped fellow with horn-rimmed glasses, and—it would seem—is constantly thumbing his nose. Though comedic and well-portrayed, this ruse borders on expiration and the character could be misconstrued as one dimensional. The most rounded character of the crew is Russell’s Leo, both in script and in performance. Russell is quick-witted, painfully high strung, and provides the best instincts of any actor on the Dorothy Strelsin stage. The second act introduces Roberta (Lisa Riegel), a romantic interest of sorts for Julius. Though there is a lot of exposition implemented to develop this character very fast, Riegel is lovely and brings a refreshing change of pace to the otherwise ulcer-inducing bunch.

The costumes by Fan Zhang do well enough to establish the different lifestyles of the four friends. Arthur’s sophisticated style is reflected in pompous colors and pinstripes; Stan dressed as the everyman. Leo’s wardrobe looks exhausted from long work hours, and Julius’ color scheme is reflective of his reckless and frenetic lifestyle.

In its nature, the Dorothy Strelsin Theatre is a very intimate space, with the front row of seats nearly on the stage itself. Director Donald Brenner does a great job in managing the playing space, which without the correct staging could easily appear crowded. This is also a testament to the set, designed by Brian Dudkeiwicz, which is simple and to the point: Act One takes place in Stan’s apartment, standardly furnished and with much attention drawn to a liquor shelf; Act Two takes place in a villa in Mallorca, the tiny island off the coast of Spain. Though minimal in props and set pieces, the choice to be conservative works in favor of the production in this tiny space, and some quick changes to the furniture and décor swiftly transport the play from New York to Spain.

A lesson for any person, New Yorker or not, this is a fun evening of silly quips and neuroses which reminds us that though personal problems are inescapable, the way in which the problems are handled is what’s important. Whether concerning finance, romance, health, or all of the above, Sheldon Bull’s Mallorca is entertaining enough to allow the audience to leave those outside problems exactly where they belong.

Running time: One hour and 30 minutes including one intermission