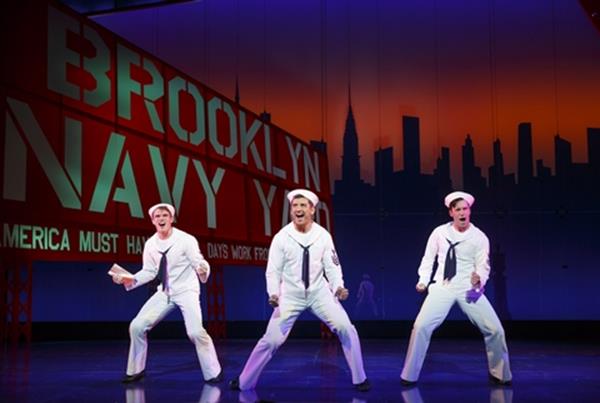 Jay Armstrong Johnson, Tony Yazbeck and Clyde Alves in a scene from “On the Town” (Photo credit: Joan Marcus)

Having been revived in New York in 1971, 1998 and 2008, On the Town would not seem like a show in need of a Broadway revival. However, several inspired theater artists including director John Rando (Tony Award for Urinetown) and choreographer Joshua Bergasse (Emmy Award for Smash) have reinvented this clever and witty show by composer Leonard Bernstein and writers Betty Comden and Adolph Green. They have restored the unadulterated fun to this now legendary stage property and treated it like it was new. The delightful and delicious results demonstrate why the Great White Way still needs a great musical comedy, rather than a concept show, every once in a while. The leads are not household names which gives the show part of its fresh and winning appeal.

Part of the fun of this production (which began life at the Barrington Stage Company, Pittsfield, Mass., in 2013 with many of the same cast) is the work of scenic and projection designer Beowulf Boritt and costume designer Jess Goldstein. They have mainly kept the show color coordinated in red, white and blue suggesting a 1940’s USO show of the same time period, occasionally stretching it to red, blue and yellow, the primary colors. Boritt’s sets are made up of streaming video projected on moving panels which allows us to travel through Manhattan, the Bronx and Brooklyn along with the characters. It permits swift transitions of the many scenes and the frenetic pace that is both New York and the inspired creation of Comden and Green. The show is a veritable tour of the NYC of 1944.

This On the Town, with 28 musicians and 31 actors, begins with a huge American flag and the singing of the national anthem, just as would have happened every night of the original run back in the 1940’s during World War II. The show begins and ends at 6 A.M. at the Brooklyn Navy Yard. Three sailors, Gabey (played by Tony Yazbeck for the third time), Ozzie and Chip have 24 hours shore leave to see all of the Big Apple before shipping out to Europe. Each wants to see the sights, both cultural and female. The melancholy and introspective Gabey immediately falls in love with the poster of Ivy Smith, Miss Turnstiles for the month of June, and as Gabey once saved their lives, the other two agree to go off in different directions in order to help find her for him, meeting up at the Times Square Nedick’s at 11 P.M. The clues are that Ivy is described as studying singing, ballet and painting. 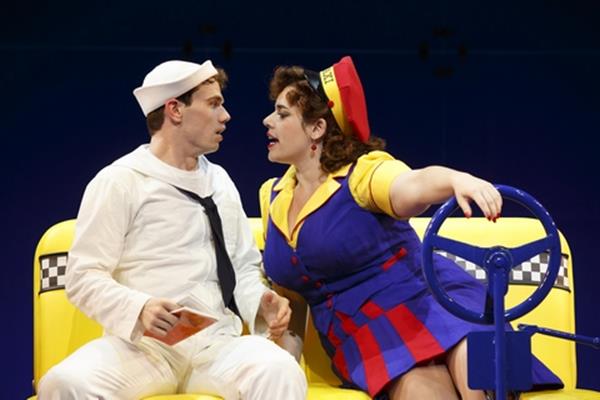 Jay Armstrong Johnson and Alysha Umphress in a scene from “On the Town” (Photo credit: Joan Marcus)

The nerdy country boy Chip asks amorous female cab driver Hildy Esterhazy to take him to all the places his father saw years before. However, none of them are still there, and anyway Hildy has other more romantic things on her mind. Experienced and virile Ozzie heads for the Museum of Art but ends up at the Museum of Natural History where he meet anthropologist Clare de Loone who is just as interested in sex as she is in her scientific specimens. She takes Ozzie home to get better acquainted. Ultimately, Gabey finds Ivy in a private session with incompetent, alcoholic music teacher Madame Dilly in a rehearsal room at Carnegie Hall.

Ivy agrees to meet him at 11 but is talked out of the date by Dilly who doesn’t want her to miss her late night job which pays for the lessons. When the men and their dates meet up in the evening, On the Town takes us to a series of themed night clubs where various parody songs and dances take place, and after a dream ballet, eventually they all end up in the Coney Island of the 1940’s. Along the way, they run into Claire’s too understanding fiancé Judge Pitkin W. Bridgework and Hildy’s roommate Lucy Schmeeler, with a very bad cold. The show ends where it began with the sailors returning on board ship while the next lucky sailors are off to their 24 hours of leave.

On the Town is one of the few musical comedies in which every song is a winner with no weak links. Bernstein’s jazzy score is justly famous for its celebrated anthem, “New York, New York,” but the musical staging makes several other numbers stand out. Claire and Ozzie’s first “Carried Away” number set in a hall of the Museum of Natural History has an unforgettable movable two-story yellow dinosaur – aside from its chorus line of dancing cave men. The lyrics to “Come Up to My Place” and “I Can Cook Too” are just as witty as they were when written. Among the slower ballads, Yazbeck is very moving with both his rendition of “Lonely Town” and “Lucky to Be Me.” The parody night club number, “I Wish I Were Dead,” is still a scathing satire of overblown torch songs. Some of the authorized updates in Comden and Green’s dialogue give another fresh touch to the show.

While the original Jerome Robbins’ choreography is very well known as the show was inspired by his one-act ballet “Fancy Free” which has been kept alive by the major companies, another delightful element of this production are the energetic dances by Bergasse which are completely in keeping with the 1940’s, from the chase ballets, through the street scene movement, to the nightclub scenes with their social dancing, to the dream ballet that ends the show. Making her Broadway debut as Ivy Smith is Megan Fairchild, a principal dancer with the New York City Ballet, who dances like a dream and acquits herself extremely well in the musical and dramatic portions. 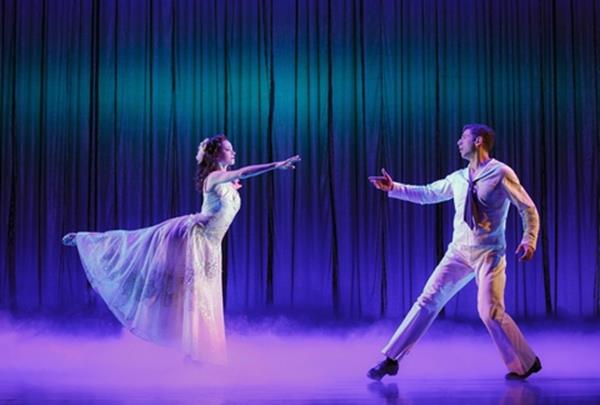 Megan Fairchild and Tony Yazbeck in a scene from On the Town (Photo credit: Joan Marcus)

This may be the first On the Town in which all three sailors get shirtless in order to show their manly chests and make the libidinous encounters believable. Yazbeck, who has played Gabey previously in both the 2008 City Center Encores! revival and the 2013 Barrington Stage Company summer production, is a sexy and introspectively moody hero. The likeably innocent Chip is played by Jay Armstrong Johnson (Hands on a Hardbody, Catch Me If You Can and Hair.) The more extroverted Ozzie is a very genial Clyde Alves (Bullets over Broadway, Nice Work if You Can Get It, and Anything Goes.)

Both Alysha Umphress (American Idiot, Bring It On) and Elizabeth Stanley (Million Dollar Quartet, Cry-Baby, Company) are hilarious as taxi driver Hildy and anthropologist Claire, respectively. Umphress’ Hildy reminds us that women were first liberated during the war years performing jobs previously done by men. Her “Come Up to My Place” and “I Can Cook Too” are sung in this vein. Stanley’s Claire is elegant and poised even when getting “Carried Away.” Downtown comedienne Jackie Hoffman is featured in four roles including the daffy Madame Dilly, and night club chanteuses Diana Dream and Delores Delores. Of course, she is over-the-top but that only adds to the fun. Among other roles, Michael Rupert as the understanding Judge Pitkin, Allison Guinn as the adenoidal Lucy Schmeeler, Stephen De Rosa in eight roles and bass Phillip Boykin in four add able assistance.