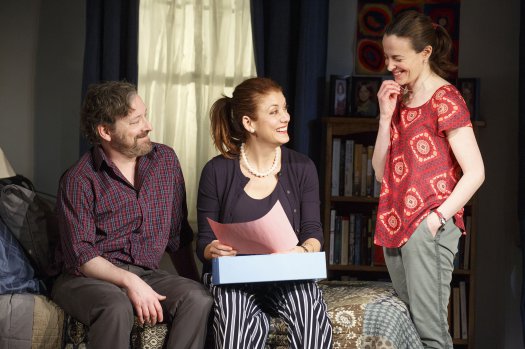 Jeremy Shamos, Kate Walsh and Maria Dizzia in a scene from “If I Forget” (Photo credit: Joan Marcus)

Steven Levenson’s latest play, If I Forget, is an absorbing and fascinating story of how family history and world events clash in one Jewish-American clan. From the playwright of The Language of Trees, The Disappearance of Tom Durnin, and the book writer of Dear Evan Hansen, this riveting drama of ideas mixed with family politics is pointed and penetrating. The play investigates heritage and legacy while its members thrash out various problems from different points of view. The sibling interactions and take and dialogue are so real and pungent that you may have the feeling that you are listening in on private conversations.

Daniel Sullivan, whose work with new plays has led to Pulitzer Prizes for The Heidi Chronicles, Proof, Dinner with Friends and Rabbit Hole, has sharply directed an ensemble cast that does not seem to be acting but inhabiting their roles. Some of the plot devices are difficult to believe, but they will only add to your stimulating after-theater conversations.

The first act is set in the summer of 2000 just after the failure of the Oslo Accords at the Camp David peace conference over Israeli-Palestinian relations. The Fischer family has gathered in the Northwest Washington, D.C., home of patriarch Lou Fischer to celebrate his 75th birthday. Unmarried younger daughter Sharon is a kindergarten teacher. Older sister Holly who lives 15 minutes away is a suburban matron married to Howard, her second husband, a high-powered lawyer. And brother Michael, a Jewish studies professor up for tenure at a distant university, has arrived with his gentile wife Ellen. 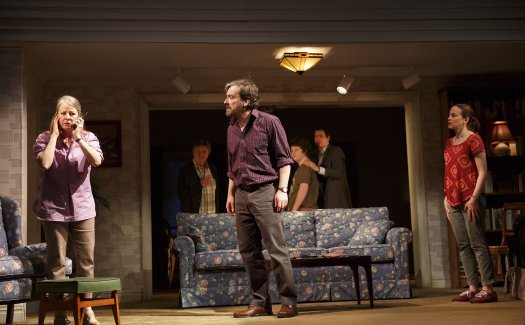 Athough the family identifies as Jewish culturally, they are not very observant. Holly attends Temple only on the High Holidays, while Sharon has lost interest in going since she found her boyfriend in bed with their (female) cantor. Even though Michael teaches Jewish studies, he is a declared atheist, while ironically his daughter Abby has discovered a new interest in rediscovering her roots. Also up for contention, Sharon has become too close to the Hispanic tenants of her father’s store, while Holly wants to renovate the property and start a designing business with her husband’s money. This would necessitate throwing out the current tenants and eliminating their father’s legacy.

When Michael arrives he is embroiled in a controversy: his third book Forgetting the Holocaust, though not yet published, has caused an uproar on his campus and a petition is circulating against him. As he ultimately explains to his family whereas Jews “used to care about civil rights, social justice, economic justice,” since 1960 they now are simply concerned with Israel and the Holocaust, using it as a political and social weapon for blackmail. Unfortunately, his ideas are not going down too well with his father who helped liberate Dachau and cannot forget what he saw. And then Michael and Ellen get a phone call from their unstable daughter Abby visiting Jerusalem on birthright who is having new mental problems.

The second act is set six months later after the election of George W. Bush. Lou has had a stroke and the family has gathered once again to make plans for his care. Michael now has a lawsuit over the way things have turned out with his book, and hopes to borrow money from Howard to pay his bills. Sharon resents having to take time off from work to care for Dad, while Holly doesn’t know Howard’s real financial situation. It becomes increasing obvious that Lou’s store, in a highly gentrified neighborhood, needs to be sold for the fortune it will bring in. A knockdown, drag out fight is inevitable for the Fischers – though Lou makes it clear he doesn’t want his legacy lost, even though he can’t speak. 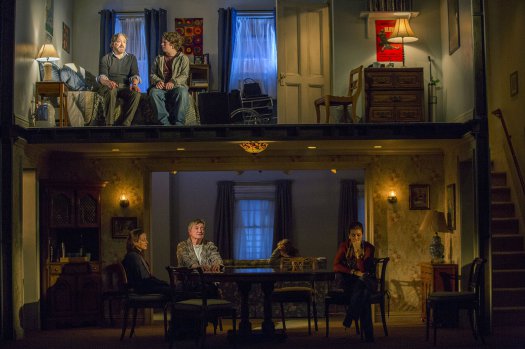 As the Fischers, Jeremy Shamos, Kate Walsh and Maria Dizzia do not seem to be acting, so real are they in their give-and-take as a family unit. The infighting and jibes cause a shock of recognition that we can all identity with. Shamos who originally made his name in high comedy is excellent as the left-wing Jewish intellectual who has no foresight into how his ideas and actions will affect his family. As the acerbic older sister, Walsh returning to the stage after a long stint in television puts one in mind of Judith Light with her layered performance. Her self-righteous defense of her actions would be hilarious if it is not an example of upper middle-class entitlement. Dizzia is sweet as the naïve school teacher who is unaware of the realities other than her own personal situation.

In his brief role as Lou, the 75-year-old patriarch, Larry Bryggman gives a moving performance as a widower who is losing his hold on things. Gary Wilmes is amusing as a professional caught up in a crisis of his own making. Seth Steinberg nails the role of Holly’s son Joey who has more questions than he is given answers and is already bored by everything as teenagers tend to be these days. Rounding out the cast is Tasha Lawrence as Michael’s supportive wife who lives under several delusions.

The production team is equally superb. Derek McLane’s two-story house setting with its revolving turntable and wrap-around staircase gives the play a homey, lived in look and swiftly deals with the scene transitions from living room to bedroom to dining room. Lit by Kenneth Posner, the design is ideal for these indoor scenes at various times of the day and season. The costumes by Jess Goldstein define each of the characters as to how they see themselves: Holly’s chic look, Sharon’s casual look, Michael’s shabby, careless look, etc.

Steven Levenson’s If I Forget is the kind of family drama that doesn’t get written much anymore: one that has something to say other than just depicting a dysfunctional situation. Not only are we pulled into the family wrangling, the issues under debate are major ones and their outcome is serious business. Director Daniel Sullivan and a splendid cast of seven make this one of the most compelling plays of the season. This is a play you won’t soon forget and its provocative nature should trigger much discussion.