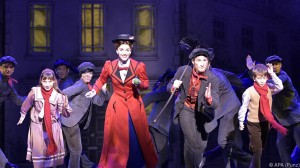 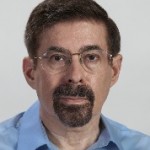 The Disney and Cameron Mackintosh London stage musical of Mary Poppins has arrived at Broadway’s New Amsterdam Theatre and the news is that it is a TKO. The musical has inspired many to learn how to sing. The magic comes from Bob Crowley’s breathtaking sets and costumes aided by David Benken’s technical direction: Mary Poppins flies in and out on her umbrella, people pop out of chimneys, toys become human, birds fly around the theater, and statues break their poses and move. The opening scrim is a blue pen and ink illustration which suggests the world of the P.L. Travers’ stories on the printed page. The Banks’ house at 17 Cherry Tree Lane, London, is a giant Victorian doll house come to life. Crowley uses brilliant colors in both his costumes and the fantasy sequences to replace the animation that made the Walt Disney film so attractive.

Ashley Brown, the new Mary Poppins, still offering “a spoonful of sugar to help the medicine go down,” is sterner and more starchy than Julie Andrews was in the film which should please P.L. Travers aficionados. However, she is also less the dominant element in this mega-musical and less charming than Andrews was. She is still much younger and more beautiful than the original Mary Shepard illustrations that accompany the published versions of the stories indicate she should be. A bigger treat is Gavin Lee, the only holdover from the London production, delightful as Bert, who appears as street artist, busker, sign painter, chimney sweep and lamp lighter. He even rivals Fred Astaire when he walks up the walls and across the proscenium.

Most of the original film score by Richard M. and Robert B. Sherman has been retained with four exceptions and some new adaptation of the music and lyrics. All the old favorites are there from the Academy Award-winning “Chim Chim Cher-ee” to “Jolly Holiday,” “A Spoonful of Sugar,” “Feed the Birds,” “Let’s Go Fly A Kite,” “Step In Time,” and “Supercalifragilisticexpialidocious.” The new songs by the British team of George Stiles and Anthony Drewe (making their Broadway debut) are serviceable but uninspired and prosaic (“Practically Perfect,” “Being Mrs. Banks,” “Precision and Order,” etc.) The new finale, “Anything Can Happen,” manages to fill up the spot without being memorable. Where the original songs had the innocence of childhood, the new songs have the air of being written to order to cover plot points and they miss the effervescence of the Sherman Brothers songs.

Richard Eyre, last represented on Broadway with the Liam Neeson revival of Arthur Miller’s The Crucible, has staged this large cast show (38 actors not including the two sets of alternates for each of the children) with a sure hand and a great deal of style. Choreographer Matthew Bourne (also credited as co-director) has not been totally successful with all of the musical numbers. The “Jolly Holiday” number in the park in which the statues come to life and the “Step in Time” tap dance routine for the chimney sweeps on the rooftops of London are a pleasure. The new number, “Brimstone and Treacle,” for Miss Andrew, Mary Poppins’ grim, frightening replacement, is delightful and Ruth Gottschall’s Andrew makes this a showstopper.

However, the Talking Shop sequence (substituting for the film’s “I Love to Laugh” number on the ceiling) seems pointless. While the ensemble performs “Supercalifragilisticexpialidocious” to hand gestures, a giant backdrop with the words appears behind them suggesting that the audience is supposed to sing along. This fails to happen. The “Temper, Temper” ; number, in which the toys come alive in the nursery and put the rebellious children on trial, peters out before it teaches a lesson or reaches a climax.

Best known for his Academy Award-winning screenplay for Gosford Park , Julian Fellowes has performed a marvelous feat melding the original Travers stories and the Walt Disney film written by Bill Walsh and Don Da Gradi into a successful new work. Where so many musicals fall down because of their books, this is an excellent example of one that both tells a good story and is witty as well. Just as the film did, Fellowes uses Bert to lead us into the story of the Banks family at the turn of the last century. At the moment that Katie Nanna, Jane and Michael’s nanny, walks out of the Bank household, as if by magic, Mary Poppins arrives, all starch and no nonsense – except that wonderful things seem to happen when the children are with her. Arriving with the East Wind, she promises to stay until the wind changes. She takes the children on adventures to the park and their father’s bank (also seen in the movie) and there is a new magical episode in the Banks kitchen.

When the wind changes to the west, she leaves as she said she would, and Mrs. Banks obtains the services of Mr. Banks’ old nanny, the forbidding Miss Andrew. However, before she can do much damage, Mary Poppins returns and put things to rights. The musical recreates the kiting flying sequence and the chimney sweep number on the Banks’ rooftop before Mary Poppins disappears again. However, before she leaves, she helps solve the parents’ problems as well. Fellowes’ script is darker than the film version and closer to the books. It also leaves out Mrs. Banks’ suffragette activities which seemed an intrusion in the screenplay, and the stage version’s Mrs. Banks is less ditsy and more down-to-earth.

Daniel Jenkins is a suitably stern Mr. Banks and Rebecca Luker who sings a new song, “Being Mrs. Banks,” is a lovely, loving wife and mother. Jane Carr’s cook and Mark Price’s footman are amusing, while Michael McCarty’s Admiral Boom and Ann Arvia’s Miss Lark seem to be leftover vestiges of the film, given little to do. Cass Morgan has an enchanted moment with the Bird Woman’s “Feed the Bird.” The dancing honors are undoubted taken by Brian Letendre as Neleus, the stone statue in the park that comes to life.

The long-awaited stage version of Mary Poppins is fun for all ages and an entertainment of epic proportions. Visually stunning, it has weak moments but it should not disappoint those who hold the P.L. Travers stories or the 1964 Disney film in high esteem. For those who complain it looks too much like the 1956 My Fair Lady , remember the Travers stories were written between 1934 and 1952. For those who see a resemblance to film version of Chitty Chitty Bang Bang , the Walt Disney movie of Mary Poppins preceded it by four years, although they do share scores by the Sherman Brothers. The new stage version of Mary Poppins delivers a magical evening in the theater.

Mary Poppins is playing at the New Amsterdam Theatre, Broadway at 42nd Street in Manhattan.