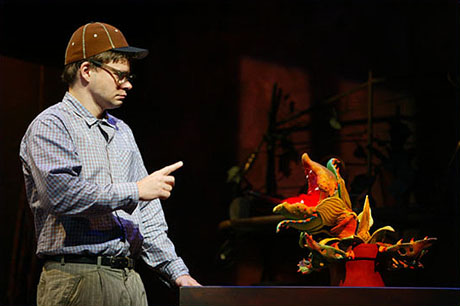 The mutating carnivorous plant that is the center piece of “Little Shop of Horrors” has taken root on Broadway. Far from its modest origins 20 years ago Off-Off Broadway (it subsequently moved Off-Broadway for a run of 2,209 performances), the musical version of schlock horror film-maker Roger Corman’s comically tacky 1960 film is, under Jerry Zaks’ exuberant direction, an unexpected delight.

I doubt that the Virginia Theater has ever been used as a horticultural laboratory before, but, thanks to designers Donald Holder’s lighting) and Scott Pask’s grimy comic book settings, the atmosphere is just right for nurturing the plant’s fearsome growth in laugh-inducing stages, something that those who are lucky enough to be sitting in the front section of the orchestra will long remember. However, until the riotously shocking ending, an awesome effect courtesy of the Jim Henson Co. and Martin B. Robinson, there is nothing to fear except possibly dying from laughter.

Howard Ashman’s book and lyrics and Alan Menken’s music have always constituted one of the best pop rock and roll theater scores. Certainly the bouncy title song and the humorously plaintive, “Suddenly Seymour,” are classics of the genre. And, although the cast is relatively small for a Broadway show, just four principal roles, a trio of street urchins, various denizens, and the impressive basso voice of the insatiable plant (Michael Leon Wooley), their talent and endearing qualities easily fill up the stage.

As you probably know, the plot revolves around Seymour (Hunter Foster), a timid, withdrawn employee in a skid row flower shop who takes great pains to care for a hybrid plant of his own creation. But next to his plant his heart belongs to the pretty but cheaply flashy Audrey (Kerry Butler) whose masochistic bent keeps her in emotional bondage to Orin, a sadistic laughing gas-addicted dentist.

Orin is played with a terrifically silly swagger by Douglas Sills, who also appears with in a parade of hilariously caricatured roles of both sexes.

To shop keeper Mushnik’s (Rob Bartlett) delight, business picks up as the plant grows and draws attention from the public. But what price fame and fortune when Seymour discovers that the plant needs blood to survive? As the plant’s victims are gobbled up, we find ourselves suddenly caring and concerned for the characters, silly and one-dimensional as they are.

Foster, recently of “Urinetown,” is terrific as the Faustian nebbish who sells his soul to win the girl he loves but, mostly, for riches. Butler holds her own and more (for those who cherish the stage and screen performance of Ellen Greene), as Audrey. Bartlett zeros in on Mushnik (shades of Zero Mostel in his performance) until the plant zeros in on him. DeQuina Moore, Trisha Jeffrey, and Carla J. Hargrove, are delicious as the perky girl-group and urchins that sing those tight vocal arrangements by Robert Billig and cavort to Kathleen Marshall’s delightful choreography. Bon appetit!

Permission is granted for this article by Simon Saltzman prepared for the November 12, 2003 edition of U.S. 1 Newspaper. All rights reserved.