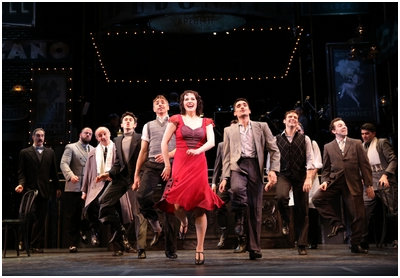 For its third and last production of the season, New York City Center Encores! presented Irma LaDouce, a show that was a great success back in 1960, running for well over a year. Alas, by intermission many in the audience were asking each other: this was a Broadway smash? From Encores! we have come to expect Champagne, and this was a dreary vin ordinaire, a bit pale and a bit stale.

The story concerns Irma-La-Douce, a Parisian prostitute, and Nestor-Le-Fripe, her pimp. The novelty that makes the story go is that it’s the pimp who wants her to quit. (Alas, not out of compassion but out of jealousy…but let it pass, let it pass.) In response we get the one thoughtful moment in the piece, where she explains that for her to live off of her man would be undignified, and thus she refuses. So Nestor masquerades as “Monsieur Oscar,” a rich fellow who will pay Irma ten thousand francs a day to be faithful to him alone…and to Nestor, of course. When he tires (literally) of the double life, he fakes the “murder” of Oscar, following which Nestor is arrested, tried, and sentenced to life on Devil’s Island. Act 2 is given over to his escape, return to Paris, and reunification with Irma.

This was a Broadway smash? How?

We might start on an answer by looking to the show’s 1956 French original. First, there was a vogue for lowlife stories, noir narratives populated by gangsters and working girls talking underworld slang, typified by the novel (and film) Touchez pas le grisbi–the title itself is slang, roughly Hands off the Loot. Second, another current pop phenomenon was Edith Piaf, still topping the charts regularly, often with songs composed by Marguerite Monnot. Finally, we add writer Alexandre Breffort. He had written a short play of mischance and redemption, Les Harengs terribles, performed in a cabaret.

Breffort and Monnot adapted and expanded the sketch into a comic parody of the hard-boiled style, and thus Irma La Douce was born. It caught the historical moment perfectly, and ran in Paris for four years.

Irma was soon brought to London, translated and adapted by Julian More, David Heneker and Monty Norman. Presumably they felt that the original story was perhaps a bit too plainspoken for the British public, or perhaps for the Lord Chamberlain’s Office (the official censor). So the pimp, Nestor, was softened up from being a run-of-the-mill gangster into a naive law student. The adaptors preserved the tang of slang, incorporating mec (pimp), poule (whore) and grisbi (loot). Typical is the pidgin-French lyric Le grisbi is le root of le evil in man. The slang also softens the tone significantly, as the harsh English terms never need be mentioned. 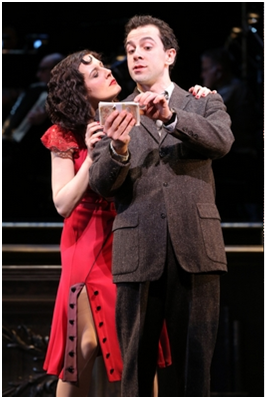 The New York production was full of talents on the verge of glory. Director Peter Brook went on to helm Marat/Sade, Clive Revill (Nestor) soon won acclaim as Fagin in Oliver!, and additional dance music was added by the young John Kander (later of Cabaret). In smaller parts were Elliot Gould (M*A*S*H) and Fred Gwynne (aka Herman Munster). In the title role was Elizabeth Seal, who made an impression big enough to beat out Julie Andrews’ Guinevere in that years’ Tony race.

Irma doesn’t sing very much, only one solo in each act, but she does a lot of dancing, and a lot of physical comedy. As a character she is the personification of guiltless sexuality, attractive without any need to be consciously seductive. Marilyn Monroe without the sadness.

So that’s why it was a hit. Now that we see the ingredients, we can ask: Why was the Encores! production such a fizzle?

The first person we meet is the barkeep who serves as narrator. This was the very able Malcolm Gets, but immediately we had a problem, as Gets was neither ingratiating nor sardonic, merely pleasant. Then the chorus of men arrives, and again we have fine character actors without character (featured were Stephen DeRosa as the Police Inspector and Chris Sullivan as Le Boss). Absent zaniness, farce, or slapstick, we have only foolishness, and that’s not enough to keep this soufflé from collapsing.

In the defense of all concerned, this is not a show that fits the Encores! template. Although it qualifies in terms of antiquarian interest and nostalgic appeal (I can’t have been the only one who knew the cast album by heart), it’s the kind of material which takes a fair amount of experimentation in the rehearsal room, which is exactly what Encores! will always lack.

Now we meet our leads. Back in 2012 Rob McClure had been a bright spot in the mostly dismal Chaplin, and was here an able farceur. The bits where he had to flip back and forth between “Nestor” and “Oscar” were fluid and landed well.

And lastly there was Jennifer Bowles as Irma, who was really done a terrible disservice. This happy hooker is meant to be a dancing firecracker, and here she had almost nothing to dance. Perhaps choreographer Chase Brock was stymied by the exceptionally full set, which took up more of the stage than usual (for Encores!), but having seen virtually all of Brock’s otherwise fine New York work (The Cradle Will Rock, Venice, The Blue Flower, Picnic), it’s bizarre that he was given this particular job. Of those productions, only Venice was a dance show, and most of that was hip-hop.

So poor Ms. Bowles paid the price, the only things working for her being the title ballad in Act 2 and the scenes with McClure, where she at least got to do some acting. For the scenes without McClure (much of Act 1 and most of Act 2), she was stuck with the bland Chorus of Foolish Men for a scene partner. I do hope we’ll get another chance to see her in a happier circumstance.

It’s hard to know exactly how much of this dullness to lay at the feet of John Doyle, whose work is generally much more interesting. Maybe madcap silliness just isn’t his forte.

On the other hand, there is some material that simply can’t land anymore. Take this lyric:

It was cheerfully naughty in 1958, when Piaf was still making hits and the mention of marijuana suggested genteel depravity.

As usual with Encores!, all the supporting creatives were excellent: the set by John Lee Beatty featured period posters, one of which cleverly featured the name ‘Monnot.’ The band led by Rob Berman was a delight as always, with accordéoniste suprême William Schimmel transporting us to Paris with every movement of his bellows.