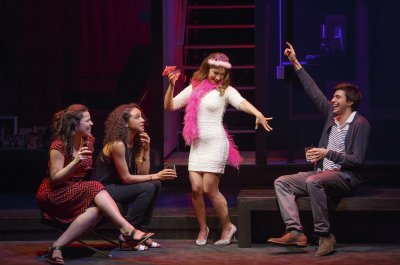 Joshua Harmon, the author of the bitingly engaging Bad Jews, is back on the boards with Significant Other, another modern morality tale.  Again he displays his incredible ear and eye for the behavior of modern twenty and thirty-somethings.  Love, its frustrations and great rewards, is the subject.  The pangs of loneliness, self-imposed or otherwise come in for a good going over, too.

Leading the pack of love-seekers is Jordan Berman (Gideon Glick), a 29-year-old gay man whose best buddies are his three female friends:  Kiki (a sassy, unabashed Sas Goldberg), the wise-cracking New Yorker whose bachelorette party opens the play; Vanessa (Carra Patterson, who makes even observing her friends richly meaningful), the level-headed co-worker who isn’t quite as self-assured as she seems to be; and  Laura (Lindsay Mendez, warm, funny and deep), the slightly over-weight, earth mother-in-training—his best bud—who, he believes, betrays him in the end.

Jordan has become infatuated with an office colleague, Will (handsome John Behlmann who also plays Kiki’s laconic Southern husband, Conrad and Laura’s fiancé, Tony) but can’t read the signs that Will holds no romantic interest, despite a pleasant “date” in which the two guys sit through a boring documentary.  One by one, first Kiki, then Vanessa and Laura meet guys and get married, leaving poor Jordan to his fantasizing.  He even goes out with an obviously gay officemate, Evan (Luke Smith, who also skillfully plays multiple roles, including Vanessa’s fiancé/husband), a desperate step which ends badly.

Significant Other, directed by Trip Cullman at a break-neck speed, scenes tumbling headlong into each other, tends irritatingly towards disingenuous sitcom attitudes.   When any real emotion erupts, as it does toward the end the show as Jordan (unfairly) rants at Laura for supposedly abandoning him to get married, it sounds like an artificial theatrical device rather than a heartfelt, gut-wrenching outcry. Up to this point Jordan behaves like a spoiled, self-centered brat so it is hard to take him seriously.

Two scenes, though, are brilliantly written, directed and acted.  The first is Jordan’s breathlessly sensual description of Will whom he observes at a distance emerging from a swimming pool at a company outing.  The intensity of detail, from the drops of water running down Will’s chest, to his forest green running shoes is mesmerizing.  Jordan’s total immersion in the fantasy pulls not only his friends into his world, but the audience, too. 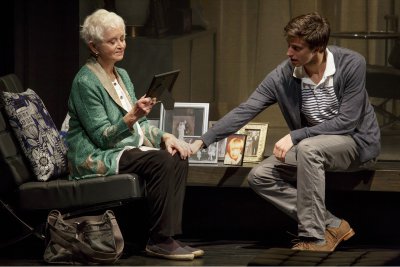 Barbara Barrie and Gideon Glick in a scene from “Significant Other” (Photo credit: Joan Marcus)

The second occurs when a frantic Jordan, sorely tempted to send an ill-advised email, leaves more and more frantic voicemails for his three girlfriends, all of whom are otherwise engaged in domestically blissful ménages with their newfound beloveds.  The contrast between the agitated Jordan and the sensuous ménages of the three couples is the play’s finest image.

Mr. Glick’s Jordan is everything the author clearly wants.  If he is annoying and superficial, only Mr. Harmon is at fault as Mr. Glick gives his energetic best to the part.

The show’s true emotional anchor is Barbara Barrie as Jordan’s grandmother, Helene.  Jordan visits her regularly to help her with her shopping and medication.  Her seemingly dithering observations on love, family and life in general, turn out to be the wisest utterances of any of the characters.  Ms. Barrie’s rich performance is beautiful in its simplicity.

Mark Wendland’s set, a warren of tiny rooms on a multi-level construction is a tad claustrophobic, but ingenious in its efficiency.  Kaye Voyce’s costumes are witty and evocative, particularly the bridesmaid dresses the women wear at each wedding.  Japhy Weideman’s lighting makes the most of Mr. Wendland’s set and Sam Pinkleton’s choreography comes across as natural, funny extensions of the scenes.