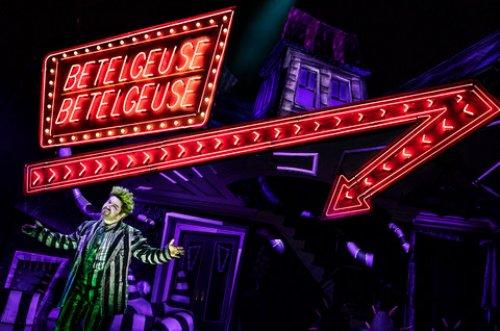 Alex Brightman in a scene from the new musical “Beetlejuice” at the Winter Garden Theatre (Photo credit: Matthew Murphy)

Not all cult movies need to be made into musicals, particularly those that are dependent on special effects which the cinema does better than the stage. This is demonstrated by the new Broadway musical based on Beetlejuice, the Tim Burton horror-comedy-fantasy. This theme park-type show is visually a spectacle with a set that does all sort of tricks and changes, but as the adage goes, you can’t go home singing the scenery. And the score by Australian composer/performer Eddie Perfect (whose only other American stage score has been King Kong the Musical) is eminently forgettable. In the title role, Alex Brightman, who was charismatic in a similar role in The School of Rock, is so over-the top that he becomes tiresome very quickly. To paraphrase Mae West, too much of a good thing is not wonderful.

Many people felt that Michael Keaton as Beetlejuice and Winona Ryder as Lydia Deetz did not have enough screen time in the film with its story by Michael McDowell and Larry Wilson. Book writers Scott Brown and Anthony King, whose only other stage show is the two character Gutenberg! The Musical!, have decided to make them the main characters of the show. Unfortunately, as both are very unpleasant people, this is a show without a hero or heroine. The musical’s plot begins with the funeral for 15-year-old Goth Lydia’s mother, after which Beetlejuice, a bio-exorcist ghost with his own agenda, show up for no apparently reason to be our narrator. He next appears to Adam and Barbara Maitland, newly dead by a fall through the floor of their Victorian mansion in Connecticut, and seeking advice on how to be dead. 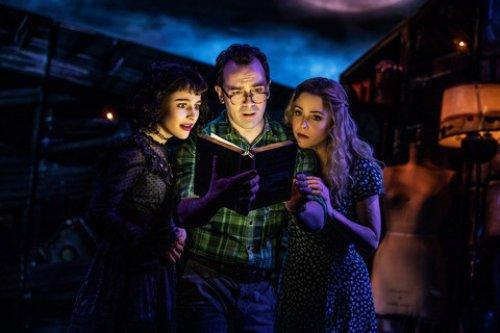 When their house is bought by Lydia’s father, the vulgar Charles, a real estate developer, and his equally empty-headed girlfriend Delia, a life coach, and remodeled from country kitchen to modern art, the Maitlands want to get rid of them, but haven’t the slightest idea how to proceed. Beetlejuice comes to their aid but really wants to find a living person to say his name three times so that he can become visible and cause the maximum mayhem which he proceeds to do. It turns out that Lydia can see ghosts which are usually invisible to people who are still alive.

The musical stays pretty close to the film’s plot including Charles’ dinner for his boss which goes terribly wrong and an attempted exorcism, except now Lydia’s death wish is to join her mother. When she gets ahold of “The Handbook for the Recently Deceased,” she discovers how to take a journey to The Netherworld (followed by her father Charles) where she hopes to be reunited with her mother. However, like most things in this musical, the idea is not developed and the show moves on to other gimmicks like a Jeopardy-style game show in which Beetlejuice is torturing Adam, Barbara, Delia and her guru Otho. 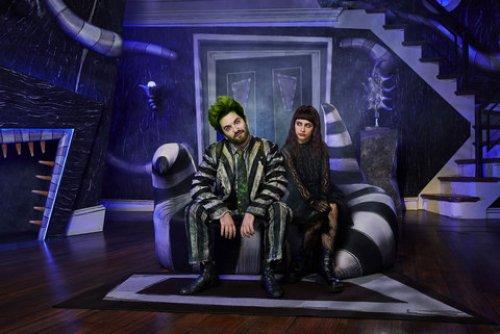 Alex Brightman and Sophia Anne Caruso in a scene from the new musical “Beetlejuice” at the Winter Garden Theatre (Photo credit: Matthew Murphy)

Brown and King’s dialogue is rather crass and the jokes are not witty. The best songs in the show are two from the movie that have been interpolated in the same places: “Day-O (The Banana Boat Song)” by Irving Burgie and William Attaway which ends the first act, and “Jump in the Line” (credited to Harry Belafante, Ralph de Leon, Gabriel Oller and Steve Samuel) which ends the show. Perfect’s original songs are noisy and loud, and rather meaningless as the songs only tell us what we already know and don’t further the plot in the manner of old style 1920’s and 1930’s musical comedies. Many of the lyrics don’t scan and have a great many false rhymes. One song which stands out from the others is “If I Knew Then What I Know Now” sung by Miss Argentina, a deceased beauty queen with a clipboard in The Netherworld, which is both hilarious and clever, making the other songs look poorer by comparison.

The design is the best part of the show but it is difficult to know who to assign credit for what. David Korins has designed the Victorian house which is transformed into a modern art marvel, and seems to change every time we see it. The lighting by Kenneth Posner plays green and purple lights alternately on the set. Peter Nigrini’s projection design and Jeremy Chernick’s special effects add to the fun but where one ends and the other picks up is only known to the four designers. Michael Curry’s remarkable life-size puppets which includes the enormous scary Sandworm which breaks into the house periodically are a big surprise each time they appear. All of this resembles a fun house ride which will be enough for some people to help find an audience. 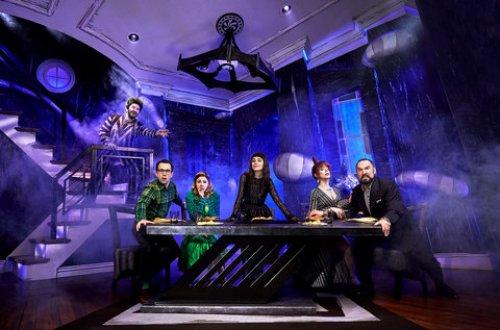 Director Alex Timbers whose Broadway musicals have included Bloody Bloody Andrew Jackson, Peter and the Starcatcher, and Rocky and whose Off Broadway musicals include Here Lies Love, Love’s Labor’s Lost, The Robber Bridegroom, and Joan of Arc: Into the Fire has been acclaimed for their immersive, environmental nature. However, his staging here is busy and frenetic as if the show paused to catch its breath for a moment it might lose momentum. The choreography Connor Gallagher is equally overactive. The usually remarkable designer William Ivey Long appears to have been constrained by the film creations as his  costumes design are less than memorable.

Brightman with his potty-mouth Beetlejuice is so intrusive that he is not an asset to the show. Lydia, in the movie played charmingly by Ryder, is, in the hands of Caruso, marked by whininess and gloom. While Adam and Barbara were the hero and heroine of the movie, Rob McClure and Kerry Butler are here so low-key, meek and mild as to be almost negligible. As Delia, Kritzer is ditzy in a manner she has been elsewhere, but steals the show in her second act appearance as Miss Argentina. Among the supporting cast, Jill Abramovitz stands out as Maxine Dean, the wife of Charles’ boss, and later as Juno, Beetlejuice’s abhorrent mother, first seen in the Netherworld. Adam Dannheisser as Charles, Kelvin Moon Loh as Otho and Danny Rutigliano as Maxie Dean make little impression.

Turning Tim Burton’s cult film Beetlejuice into a stage musical was a difficult task which a cleverer book and more memorable songs would have helped to solve the stage problems. In the form in which the show appears at the Winter Garden it is only for the few who ask little from their shows but eye-filling spectacle. The rest are duly warned.