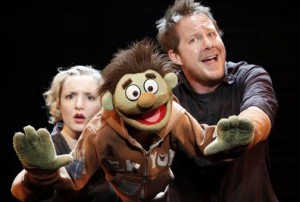 What happens to the kids who frolicked on “Sesame Street” when they grow up, graduate from college and arrive in the big city with nothing but a liberal arts degree and misguided optimism?

They land on “Avenue Q.”

“Avenue Q,” an unlikely cross between “Rent” and TV’s “The Muppet Show,” is a musical that recently moved to Off-Broadway’s New World Stages after an award-winning run at Broadway’s Golden Theater.

Jauntily performed by a cast of seven nimble actors and puppeteers, the show follows the misadventures of a dozen or more Gen X neighbors, stranded on the same block of an unidentified outer borough of Manhattan.

Some of the characters are human. Some are puppets, with a striking, deliberate resemblance to Jim Henson’s furry crew. (The actors who voice and manipulate the puppets are plainly visible beside their plush alter egos; that this never becomes confusing is a tribute to the cast’s skill, and Jason Moore’s swift, unfussy direction.)

But all Avenue Q’s residents, stuffed or human, are unhappy. “It sucks to be me!” the luckless denizens of Avenue Q proclaim in the show’s opening number – even the relatively stable romantic couple of unemployed comedian Brian (a human character portrayed by Jordan Gelber) and unemployed psychologist Christmas Eve (Ann Harada).

Things go downhill from there – to marvelous comic effect

The puppet characters are performed – and were designed – by a small group of “Sesame Street” veterans who gleefully trample on the audience’s expectation that these bug-eyed moppets will be sweet and cuddly.

Our putative hero, recent college grad Princeton (John Tartaglia), loses his job and his girlfriend seeking after his “purpose,” which is neatly defined in a “Schoolhouse Rock” style video segment as “that little flame that lights a fire under your ass!”

It’s weirdly discomfiting to come across such profane puppets, particularly during a sex scene that would be triple-X rated if performed by humans.

And if songs about the joys of ethnic jokes (which “may be uncouth/ But you laugh because it’s based on truth!”) and “Schadenfreude” ; (happiness at the misfortune of others, as we are informed by the terrycloth chorus) are inherently, conceptually comical, they’re also designed to make you squirm as you laugh.

This may be a puppet show, but it’s definitely not for kiddies.

And the show neatly uses the shorthand of pop-culture references to quickly sketch in character. When Avenue Q resident Nick (Lyon again) confronts his uptight roommate Rod (Tartaglia again) with the sung proposition that “If You Were Gay (It’d Be Okay!),” we instantly understand their relationship – this duo is so obviously “Sesame Street’s” Bert and Ernie, out of the closet at last.

Even the set is clever: Set designer Anna Louizos’ two-dimensional backdrop of rundown townhouses is replete with doors and windows that pop open like the flaps on an Advent calendar, transforming segments of the stage into a disco, an apartment interior, or even the observation deck of the Empire State Building.

Not an inch of space is wasted. At one point a pile of packing boxes spring to life as the back-up chorus for a dance number. The score’s style, by Robert Lopez and Jeff Marx, is also used to ironic effect. Protagonist Princeton rages through a rebellious rock anthem about how he wishes he could just “go back to college.” When Christmas Eve launches into an over-the-top sentimental ballad, she croons: “The more you love someone, the more you want to kill him.”

Even second act’s big finale, “For Now,” combines a rousing “42nd Street” style Broadway show tune with the depressing sentiment that at least unsatisfactory jobs and relationships are only “for now” and will end eventually. (This number gets the biggest laugh of the evening when the assembled company sings that even “George Bush is only for now!”)

That’s an uninspiring thought to leave the theater with. But ” Avenue Q” isn’t really interested in inspiring its audience; it’ s more concerned with knocking the stuffing out of the conventions of a Broadway musical, mocking everything from public television to Manhattan real estate prices along the way.

Like its hero, Princeton, “Avenue Q” may never find a deep purpose. But it’s original and entertaining enough that it doesn’t really need one.