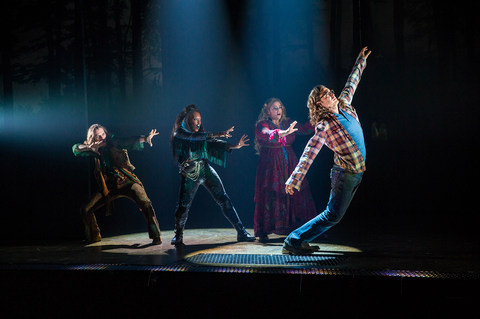 Kaleb Wells, Wonu Ogunfowora and Alysha Umphress as The Stoners and Ryan McCartan as Mac in a scene from the new musical “Scotland, PA” at the Roundabout’s Laura Pels Theatre in the Harold and Miriam Steinberg Center for Theatre (Photo credit: Nina Goodheart)

There have been many adaptation of Shakespeare’s Macbeth but none of them probably as entertaining as the new musical Scotland, PA. Presented in the cartoon style of Little Shop of Horrors, the show does not break any new ground but proves to be a fun evening. However, director Lonny Price who has staged musicals both big (Sunset Boulevard) and small (Lady Day at Emerson’s Bar and Grill) gives the interest high and the show bubbling.

Based on the 2001 film by Billy Morrissette, with book by Michael Mitnick (The Current War) and music and lyrics by Adam Gwon (Ordinary Days), Scotland, PA  is reset in 1975 in a depressed town in Pennsylvania where Duncan’s is the only hamburger joint in town but its shabby environment and rude proprietor makes it not very inviting. This dark tale keeps much of Shakespeare’s plot while Mitnick’s book has telescoped the screenplay to fewer settings but remains faithful to the film.

Mac McBeth and Pat, his wife of six years, have worked at Duncan’s for a decade but still can’t make ends meet while the abusive Duncan is rolling in dough. When Duncan rejects Mac’s latest idea for improving the restaurant (as he already rejected Mac’s chicken nuggets, donut holes, fish on a bun and burgerless burgers), Pat has had it and tells Mac that their big future has evaporated. Just at this junction, on his way home Mac meets three Stoners in the woods (who claim to be voices in his head) and is told that three prophecies will occur: “You will first count the empty bags,” “someone will say ‘Mac, I owe you a debt of gratitude,’ “and “then that’s when you will unveil what’s in your shirt pocket.” 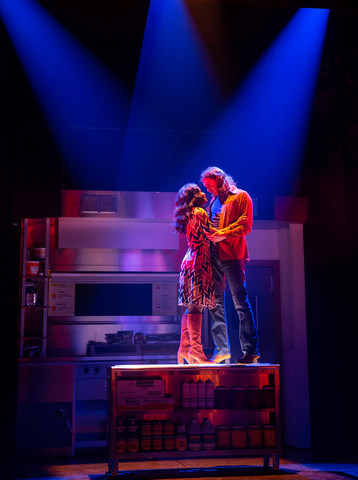 Taylor Iman Jones and Ryan McCartan in a scene from the new musical “Scotland, PA” at the Roundabout’s Laura Pels Theatre in the Harold and Miriam Steinberg Center for Theatre (Photo credit: Nina Goodheart)

When next Mac is at the restaurant, he counts up the number of bags of rolls and the amount of money in the till, and exposes Doug as having been stealing from the take. Duncan fires Doug but appoints Malcolm in his place instead of Mac who is owed the job. Pat has had enough and convinces Mac that they should rob Duncan’s safe during their friend Banko’s birthday party, but things don’t go as planned: Duncan ends up dead in his Fry-O-Later and Pat ends up with an oil burn on her hand that will not go away. However, they plant evidence on Andy and initially get away with their crime.

The newly liberated Malcolm is glad to sell the restaurant to them which they rename “McBeth’s” and they renovate it with a modern red and yellow including a yellow sign with pointy M’s like mountains. When Detective Pat McDuff is sent from Harrisburg to investigate, it looks like all may be over but Mac and Pat are able to cover their traces. Although Mac becomes the Burger King with his new innovations, neither he nor Pat feel secure and she convinces him to do something about it. The next three tragic prophecies from The Stoners make Mac feel invincible but unfortunately all come true as predicted.

Beginning with thunder and lightning, Mitnick’s book has enough quotes from the Scottish play to remind the audience of its source: “Fair is foul,” “tomorrow and tomorrow,” etc. Gown’s score is a combination of rock anthems and pop ballads. The most effective are the character songs: Banko’s comical “Kick-Ass Party” as he sets up his own birthday bash, Malcolm’s witty “Why I Love Football” in which he comes out as gay, Pat’s impassioned, “Bad Dream” which is the stand-in for her sleepwalking scene and reveals her at the end of her rope, and Mac’s song of triumph “Soliloquy” directed at Det. McDuff. Josh Rhodes’ choreography spices up the restaurant production numbers “Drive Thru,”  “Open for Business” and “More.” He has also choreographed The Stoners’ exuberant “Destiny,” “Everybody’s Hungry” and “Outta Here.”

As written and acted by Ryan McCartan, Mac is rather bland and colorless, but has a fine singing voice. However, Taylor Iman Jones as his ambitious wife makes up for it with a layered performance that drives our interest. As his best friend Anthony Banconi, AKA Banko, Jay Armstrong Johnson makes the most of the dim-witted but good-natured restaurant employee who is lonely for companionship and still lives with his mother. Megan Lawrence has a field day as the wry Detective Peg McDuff who compares herself to Nancy Drew and has a killer number “Peg McDuff Is On the Case.” Alysha Umphress, Wonu Ogunfowora and Kaleb Wells appear to be having a wonderful time as the Three Stoners and make multiple appearances throughout the show including as customers at the burger joint, unlike the Bard’s Three Witches. 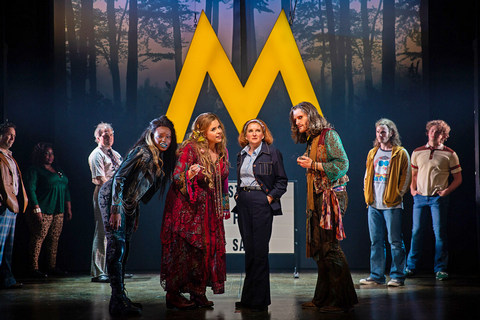 The company of “Scotland, PA” at the Roundabout’s Laura Pels Theatre in the Harold and Miriam Steinberg Center for Theatre (Photo credit: Nina Goodheart)

Jeb Brown is decidedly nasty and loathsome as the conceited Duncan and makes several later appearances as a ghost and as Ray Crimp who turns McBeth’s into an international franchise. As his rebellious son Malcolm, Will Meyers is perfect as the teenager who has no respect for authority. David Rossmer demonstrates his versatility as Doug, Duncan’s dishonest manager, Andy, the hobo, and Gary, the local television news reporter. Lacretta is a very hearty Mrs. Lenox, a longtime employee at Duncan’s and later McBeth’s. Ogunfowora also makes an appearance as Brenda, the local babysitter who does not find Banco attractive.

Anna Louizos’ scenic design alternates between the woods surrounding Scotland, PA, and the burger joint and kitchen in both its guises. The lighting by Jeanette Oi-Suk Yew uses reds and purples for startlingly scary effects on Louizos’ sets. Tracy Christensen has created a colorful and amusing set of costumes which include The Stoners far-out garb, the townspeople’s streetwear and Mac’s make-over uniforms for all his employees. Sound designer Jon Weston is called upon for such noises as the crashing thunder, the sizzling Fry-O-Later, and gunshots in the forest. The attractive score makes use of orchestrations by Frank Galgano and Matt Castle as well as vocal arrangement by the composer.

The exaggeration of Scotland, PA puts it the camp of musical comedies that resemble cartoons like It’s a Bird … It’s a Plane  … It’s Superman, You’re a Good Man, Charlie Brown, and Little Shop of Horrors. As such it is a fun show parodying Shakespeare’s Macbeth. However, while Lonny Price’s production is engrossing and always on the move, it does not make use of the opportunity to be something more.