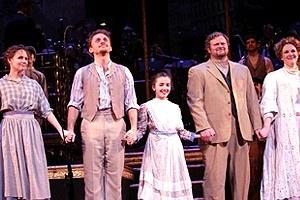 Is there no greater pleasure in the contemporary New York City musical theater scene than to watch as the curtain rises at City Center to reveal one of Rob Fisher’s packed orchestras? For the past twelve years, City Center Encores! has lucky musical theater lovers the opportunity to view often neglected works of the past from writers such as Rodgers & Hart, Strouse & Adams, and even Sigmund Romberg in full scale presentational productions starring working Broadway actors. (The 2005 Encores! season, it is noted in Playbills, is dedicated to the memory of the one-of-a-kind “Chicago” and “Cabaret” lyricist Fred Ebb.)

“A Tree Grows in Brooklyn,” the 1951 Broadway musical (music by Arthur Schwartz, lyrics by Dorothy Fields, book by George Abbott and Betty Smith) based on the novel by Betty Smith, represents the perfect show for a company like City Center Encores! to present. The show, due to a book that would seem antiquated and melodramatic by today’s standards, is unlikely to ever receive a Broadway revival (although it did receive a revival last year at Goodspeed Opera House). However, the show possesses a golden score characteristic of the Broadway golden age of the early 1950s, and is worth breathing life into, even if just for a weekend at City Center. Gary Griffin, who has tamed previous Encores! productions including “The New Moon” and last year’s “Pardon My English,” provides skillful, erudite direction for the piece, showcasing the musical’s memorable score as well as a number of talented performers such as Jason Danieley, Emily Sinner, and Sally Murphy.

Upon watching the show’s plot unfold, any musical theater savvy person is likely to note its parallels to “Carousel,” in that both shows follow nice girls who marry good-for-nothing men who eventually die in unfortunate circumstances. The show opens on a street in Brooklyn, under the Williamsburg Bridge, on a Saturday Night in 1900. The company immediately breaks into “Payday,” expressing the excitement of the friendly atmosphere. Moments later, lead character Johnny Nolan, a singing waiter, and his pals sing “Mine ’til Monday.” It is then that Johnny, expecting to kiss his girl Hildly (Nancy Anderson), accidentally smooches the young and innocent Katie (Sally Murphy). After this chance meeting, Katie sings the show’s sweetest ballad, in which she vows to “Make the Man Love Me.”

The show then follows the marital saga of Johnny and Katie’s relationship. Johnny, it is revealed, is a constant drunkard, and this prevents him from being able to hold down a good job. It even forces his wife to take a job as their building’s janitor. At the end of Act One, we see her scrubbing the stage with a sponge and bucket. However, it is at these moments of pain that Johnny comforts her with his idealistic, childlike dreams and visions. In “I’ll Buy You A Star,” Johnny swears to his wife that “I’ll buy you a star, Not just a star, But the best one in the Sky…But I won’t rest, Until I Buy the moon.” Yes, these lyrics seem awful weighty, but set to sweeping musical refrains by Arthur Schwartz, it presented a beautiful moment onstage when, at the end of the song, an embittered yet in love Katie ran back into Johnny’s arms, and the curtain fell.

And in the midst of the Johnny-Katie soap opera is a separate second lead-musical comedy plot involving Aunt Cissy and her beau Harry (John Ellison Conlee). In the original Broadway production, the role of Cissy was played by the comic actress Shirley Booth, and she became the well-regarded person in the production by critics and audiences. Emily Skinner, an Encores! veteran, was delightful and spunky in the role. Skinner was recently on the road in the Disney touring company of “On the Record,” and on certainly looks forward to her eventual return to Broadway.

A young actress also worth nothing is thirteen year old Katherine Faye Barry, who played Johnny and Katie’s young daughter, Francie. She was onstage throughout the second act, and her acting stood par with the rest of the adult company. One must also mention the detailed period appropriate costumes of Carrie Robbins. As many learned at the show’s Saturday matinee post performance discussion, the costumes used in the production were created mainly out of garments that were nearly 100 years old!

Encores! next production, which takes place next month, will be the 1970’s musical “Purlie.” For more information, visit Citycenter.org.
A Tree Grows in Brooklyn